So you decorate your home with lights for Diwali each year. This time round, why not win a prize for it?

‘Decorate your home’ is but one of the many Diwali contests currently ongoing in Sydney and Melbourne.

Two NSW constituencies will be going head to head again this year to see which local area will have more homes decorated for Diwali.

If you live in the Strathfield or Granville Electorates, you can participate in this contest.

It’s an interesting face-off that was launched last year. The local members Jodi McKay and Julie Finn are both well-known Indophiles, and enjoy participating in Indian functions and festivals, which they attend proudly in their saris. Of course their knowledge of and engagement with India and Indians go way beyond their sairs, and it is great to see them extending this to our largest festival of the year. 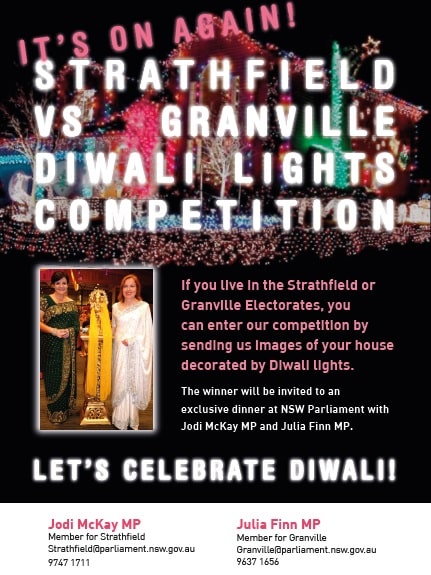 Julie Finn sends this message out to potential contestants: “Your decorations always look amazing and beautiful – please share them with us. It doesn’t matter if your home is big or small, Diwali celebrations are beautiful so please send us your photos.”

Strathfield-wallahs or Granville-wallahs: who will make us proud this year? Time will tell.

In this unique Facebook contest, Melbourne-based organisers Celebrate India asked contestants to send a visual clip of themselves singing a song. These were then put to Facebook, and followers in the community voted for their favourites. Contestants competed in two categories: 12 years and under, and 13 years and above.

In the 12 Years and Under category, the young Vinayak Duggal was quietly confident in his Channa Mereya (Ae Dil Hai Mushkil). In the other, the brilliant Bharat Uniyal wowed everyone with his Bajirao Mastani hit Aaj ibaadat rubaru ho gayi.

Both solid performances, they’ve taken this simple contest to wonderful heights, and provided much enjoyment to the community. Prizes (for winners as well as runners-up) came sponsored by Singapore Airlines and Melbourne Star observation wheel.

In its 12th year celebrating Diwali in a landmark Melbourne venue (Federation Square), Celebrate India has been organising the Sing for Diwali contest for four years now.

The idea behind it all is to be inclusive, Celebrate India head Dr Arun Sharma tells Indian Link. “Community involvement is the name of the game. As word spreads about Diwali at Fed Square, we have requests from many different groups wanting to do a little performance, and as we can’t involve everyone on stage at our flagship event, the idea for the contest came up, to be held at an informal and broad-based community level.”

Another trademark Celebrate India contest in the lead up to final dhamaka at Melbourne’s Fed Square on 3 Nov, is Light for Diwali. In a concept revived from 2007, the not-for-profit organisation invites you to deck your place up with lights, and send in a video clip (maximum 60 seconds) via WhatsApp to a designated number. 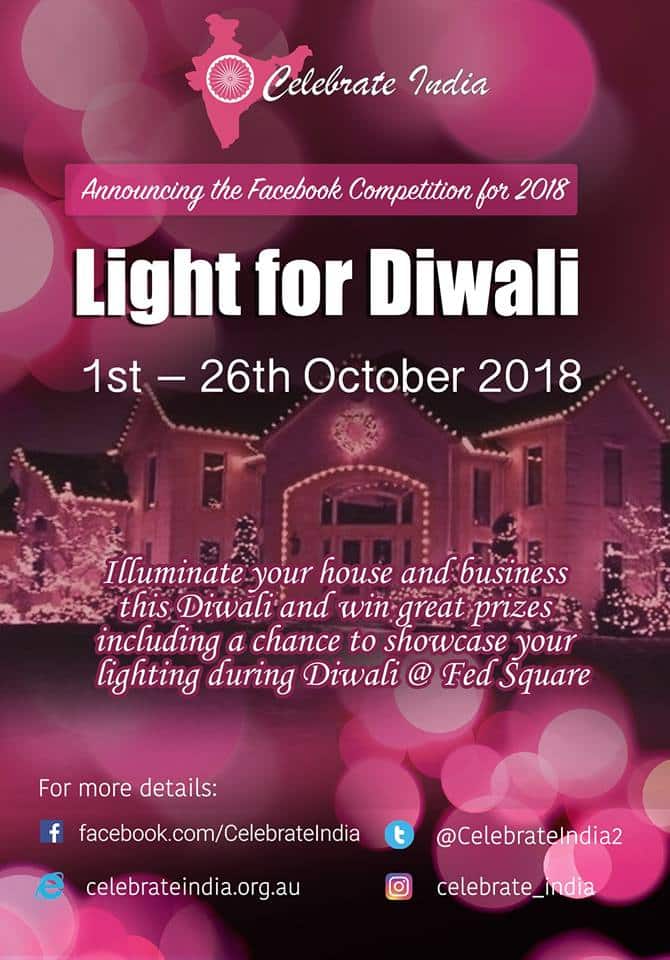 Also requested, is a short speech about what Diwali illumination means to you.

The main intent here, Dr Sharma reveals, is for the message of Diwali to get into the far-flung suburbs. Of course, Facebook helps efficiently in the judging process.

This contest is on until Sun 28 Oct – so send your entries in.

At Indian Link, we run our own Diwali-based competition, in which we seek out the youngest artists in our community across Australia. A mandala design is sent out which the kids colour in and submit to us. The contest, which has been running for five years now, is aimed at getting our kids involved in Diwali at their own level, and in a manner that is relevant and enjoyable to them.  The winner has the privilege of having their work transformed into our annual Diwali greeting card. An initiative that started small five years ago, the contest has now evolved to include two different categories: 7 Years and Under, and 8 Years and Above. Exciting prizes are announced for winners and runners-up in each category. Shortlisted artworks are featured in our Diwali special print edition.

This year, we’ve received a record 120 entries, and for the first time, five submissions from non-Indian entrants.

The judging process is currently on.

In a contest held in association with Indian Link Media Group, NSW’s Blacktown Local Council is organising its “Light Up Your Homes” competition again this year.

Forty homes competed last year in the inaugural year – perhaps many more than were expected – and Council is hoping to see this number increase this time round.

With almost 8% of Blacktown’s population having Indian descent, it was unsurprising that the competition got such a good response.

Residents of Blacktown chose their own themes, such as Peace, and built their lighting theme around it. Some chose to add rangoli designs on the driveways to bring in even more glamour.

Looking forward to this year’s themes: women’s empowerment? Stronger leaders? Come on, Blacktown wallahs, there’s so much to choose from, given it’s been a happening year!

Check out the Blacktown Council website for more detail. (www.blacktown.nsw.gov.au)