Home Main Category Dil bole UP, UP, UP!

PRIYANKA TATER features in the new ad for 7-UP, made right here in Sydney 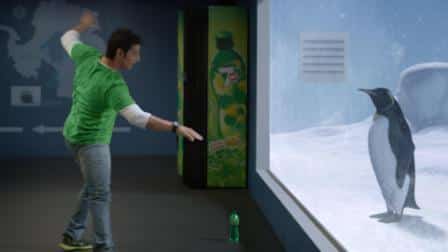 A catchy tune, Bollywood star Sharman Joshi dancing to it, and to top it off, making a penguin shake a leg too in a dance-off…

This is the latest 7UP commercial from PepsiCo.  So, big deal, you say! Well, for me it is, as I harbour some fond memories attached with this commercial.

The ad was filmed right here in Sydney not so long ago, directed by renowned Australian director Damien Toogood. No, I wasn’t one of those bystanders trying to catch a glimpse of the shoot…I was actually a part of the shoot!

Here, I suggest, you log on to www.youtube.com/watch?v=4eku5v2Qhgw and see the ad for yourselves.

That pretty young lady (oops! I seem to have shed off my modesty already!) in pink standing with her ‘screen’ family, inquisitively staring at the penguin, is moi! And now having trumpeted my presence in the television commercial, I owe you a share of my wonderful experience.

The Dil Bole I Feel UP ad for 7UP was shot over a two-day period in Sydney on the same location where the Channel Ten show The Renovators was filmed. Apart from the brand ambassador (Sharman in this case), the casting required an Indian family (husband, wife and son), a young college girl, a Japanese couple and yes, ‘The Penguin’. With the exception of the first and last characters, all of us were auditioned and once selected, we were asked to go in for the dress rehearsal a day before the shoot. While the director approved all the other costumes and looks at once, my character (the Indian mom) proved to be a problem child. Beige, pink or lavender…what kurti should the Indian mom be wearing?  Denims, capris or cotton pants…what should be the bottoms? After some creative brainstorming, beige and denim were given the nod of approval. But alas, this was not going to be so easy!

After a quick brekkie, the crew was busy setting up the equipment and looking into all the necessary detailing that a film shoot requires, while the cast got caked up.  I was already feeling like a star with all the debate and creative exchanges revolving around my dress, yet again! ‘What should the Indian mom wear?’  This time the agency wanted a bright colour, while the director had earlier zeroed in on the beige. So here I was in and out of the dressing room, sashaying to all the possible permutations and combinations of various colours and tops and bottoms. Finally, finally – the pink kurti and beige trousers were the chosen ones!

This was not the only attention coming my way. I was the only Indian on set aware of the status of Bollywood star Sharman Joshi and his resume, and had plenty to keep myself busy as I courted a rally of questions from my fellow cast members. How big a star is he? What movies has he done? Is he a good actor? Is he very famous in India? Is he as big as Shah Rukh Khan? (Idiots, I said to them… you know, 3 Idiots, the Aamir Khan movie – Sharman was the guy that jumped, to protect his mates). For someone who’s been literally living off Bollywood for the past few years (as an entertainment journalist in India), I regurgitated all my Bollywood gyaan and loaded them with facts and figures.

But the answer to one question remained even beyond my understanding – is he flying down from India only for a day to shoot this ad, that too indoors?  I confess that question had been on my mind as well. But now having seen the final version on-air with the latest in CGI (computer generated imagery) and motion capture technology, who’s complaining or rather questioning!

Soon our ‘Bollywood star’ arrived. Unassuming, calm and composed, Sharman acknowledged our presence with a gentle smile and walked straight to the set; he meant business. Yes, he knew he had only a day and lots and lots of dancing to do. So here we sat watching Sharman perfect his dance moves. Have to give credit to our Bollywood training, it makes dancing a piece of cake for our desi actors…. Sharman was no different. With no ‘starry’ breaks, the actor was truly a treat to watch as he tried to perfect every move and every expression. Matching steps with the famous Hollywood choreographer Simon Lind of Happy Feet 2 fame ain’t easy, but our desi boy Sharman did it with ease and élan.

So when finally it was the turn of the rest of the cast to come into the frame, we felt the excitement running through our veins. While Sharman’s dance-off with the (imaginary) Penguin continued, we did bit of acting.  Day 1 ended with the last shot in the ad, the ‘claps’ (deservedly so for our star performer!)

Having had a sumptuous breakfast, Day 2 was sans Sharman as he had done his bit and flown back to India. So we continued shooting our parts to perfection. It was a comparatively shorter day for us as we wrapped up post-lunch. However the crew was still working on the CGI and all the technical detailing.  What professionalism!

Just two days and we had already become like family, chatting, having fun and working hard too. So now that it was time to say goodbye, the heart felt some weight. With hugs and kisses and lots of wishes, we parted ways with the hope of meeting someday, somewhere, maybe for yet another shoot. Till then, when I look back at the experience, all I can say is, “Dil Bole I Feel UP!”

Meanwhile, the 32-year-old Joshi said in a statement about the ad, “The 7UP philosophy of Dil Bole I Feel UP reflects the mood of our country at the moment, and how we always manage to stay positive”.

Cheers to that…. 7UP anyone?