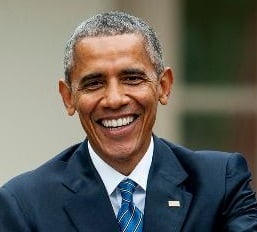 With only hours to go until he leaves the White House, President Barack Obama appointed two Indian-Americans to key administration positions

Maneesh Goyal has been made a member of J. William Fulbright Foreign Scholarship Board while D.J. Patil was made a member of the National Infrastructure Advisory Council, according to a White House press release on 17 January.
Goyal is the founder of several companies, including 214, Live in the Grey, Pink Sparrow Scenic, MKG and Pineapple Co, where he also serves as the Chief Executive.


Patil has served as the US chief data scientist at the White House Office of Science and Technology Policy since February 2015.
Obama announced appointments for 27 officials to government positions and named two to jobs requiring Senate confirmation. The wave of announcements included several White House officials, who will serve well after Obama leaves office, AOL News reported.
“I am proud that such experienced and committed individuals have agreed to serve the American people in these important roles. I know they will serve the American people well,” said Obama.
Athletes, including gymnast Gabby Douglas, basketball players Kareem Abdul-Jabaar and Jason Collins, and soccer star Carli Lloyd were appointed as members of the President’s Council on Fitness, Sports and Nutrition.

Collins, who made history four years ago when he became the first openly gay player in the NBA, and Lloyd are slotted to chair the council.
Obama also appointed two long-time administration insiders, Senior Adviser Valerie Jarrett and National Security Adviser Susan Rice, to the Board of Trustees of the John F. Kennedy Center for the Performing Arts.
Marjorie Margolies, a former US congresswoman from Pennsylvania who is Chelsea Clinton’s mother-in-law, also received an appointment as a member of the Commission for the Preservation of America’s Heritage Abroad.

Two of the president’s appointments will require Senate approval, including Todd Phillip Haskell, nominated to serve as Ambassador to the Republic of the Congo, and Jason E. Kearns, appointed to serve on the International Trade Commission.
Obama also appointed two transgender officials to serve in the administration. Raffi Freedman-Gurspan, a current White House LGBT liaison, was appointed to the United States Holocaust Memorial Council, and Shawn Skelly, a Navy veteran, to the National Commission on Military, National, and Public Service.
With IANS
- Advertisement -
Share
WhatsApp
Facebook
Twitter
Linkedin
Previous articleIndian American DJ to perform at Trump's inauguration
Next articleReconsider your decision, Melton Christian College