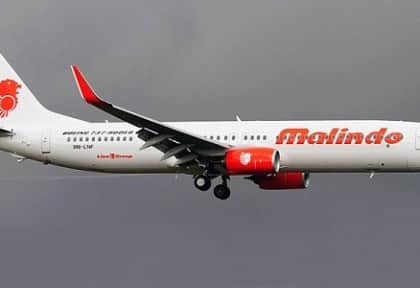 Chandran Rama Muthy, CEO of Malindo Air said, “We are deeply honoured to receive the prestigious CAPA award this year. This significant victory is a validation of our team’s dedication throughout the region, which ensures that Malindo Air remains competitive in the industry. Malindo Air has always placed customers at the heart of what we do, and we work towards creating the very best experience possible for our customers at every touchpoint. We take pride in our product and services and relentlessly motivate ourselves to exceed expectations. With a rapid expanding network through the continents of Asia and Australia, I personally believe we are receiving global recognition for the indisputable comfort and premium in-flight services that are offered with economical flight rates.”
The airline has also previously bagged the Airline of the Year (Passenger) at the KLIA Awards 2014 and Top Performing Airline 2015 by Travelport.
To celebrate this favourable milestone, Malindo Air now offers 1 million promotional seats with air fares starting from only AUD169 one way all-inclusive for economy class Perth to Kuala Lumpur and Phuket; AUD179 one way all-inclusive for economy class from Perth to Penang, Langkawi and Saigon; AUD299 one way all-inclusive for economy class from Perth to Colombo, Kochi, Trichy, Trivandrum and many more sectors; available for purchase from now until 27 November 2016 for travel period between 1 January until 30 September 2017.
CAPA’s Asia Pacific awards recognize strategic leadership in the industry and are given out annually at a gala dinner during the CAPA Asia Aviation Summit. The Summit this year is in Singapore on 15-16 November 2016. Candidates for the awards are short-listed by the CAPA team of analysts and by the Heidrick & Struggles team of aviation partners. The candidates are then reviewed by an esteemed panel of eight independent judges.
Centre for Aviation (CAPA) and the CAPA Aviation Awards for Excellence were established in 1990. CAPA is a leading provider of independent aviation market intelligence, analysis and data services, covering worldwide developments.
CAPA’s Aviation Awards for Excellence are intended to reward airlines and airports that are not only successful but have also provided industry leadership in adjusting to a new environment. At a time of industry upheaval, our winners are adopting strategies that offer new directions for others to take up.
The CAPA Awards for Excellence are independently researched by CAPA and Heidrick & Struggles, and selected by an independent international panel of judges.
About Malindo Air
Malindo Air is a Malaysian airline with main hubs at the Kuala Lumpur International Airport (KLIA) and the convenient KL downtown city airport Subang Skypark in Selangor, Malaysia. The airline took to the skies in March 2013 with domestic flights and has since grown to operate routes to all major airports in Malaysia and across regional destinations in Indonesia, Thailand, India, Bangladesh, Nepal, Singapore, China, Australia, Sri Lanka, Vietnam, Pakistan and Taiwan. The fleet itself has grown leaps and bounds to 16 ATR72-600 and 23 Boeing 737NG as of 31 October 2016.
Today, the airline operates over 800 flights weekly across a continuously growing network of more than 41 routes in the region. More recently, the airline won Airline of the Year (Passenger) at the KLIA Awards 2014 and Top Performing Airline 2015 by Travelport.