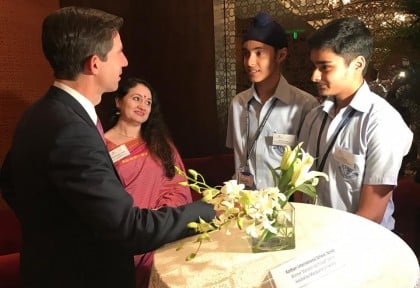 Australian Minister for Education and Training Simon Birmingham has said India is a significant opportunity for educators and Australia will contribute to education, which is a strategically important sector

There are over 60,000 Indian currently students in Australia and increasing number of Australian students are also coming to study in India.

“India represents a significant opportunity for both Australian educators and students, which is why the commitments we’ve secured will continue to deliver on what is a strategically important relationship for both countries and our respective education sectors,” a release from the minister’s office said.
“I am confident that, thanks to the positive discussions had in India, it won’t be too long until we see Australian universities and training providers complement their significant numbers of Indian students studying in Australia with a significant presence in India, too,” he said.
Birmingham is accompanying Australian Prime Minister Malcolm Turnbull, on a four-day state visit to India.

On the participation in the Skill India Conference, Birmingham said: “Australian educators are well-placed to help the Indian government achieve its ambitious target of upskilling 400 million Indians by 2022 and I’m pleased that Minister Rudy has endorsed the value of Australian ‘train the trainer’ courses being delivered by Australian providers.”
“Both India and Australia recognise the central value of education and innovation in the prosperity of our societies,” Modi said while jointly addressing the media with Turnbull following their delegation-level bilateral talks.
“It is no surprise, therefore, that cooperation in the field of education and research is one of the most important aspects of our engagement,” he said.
Modi also said that the Australia-India Research Fund of nearly $100 million has focused on collaborative research projects in areas such as nanotechnology, smart cities, infrastructure, agriculture and disease control.
“The momentum we’ve gained at ministerial and official levels and the support shown by Australia’s universities and vocational education providers will continue to deliver for our partnership with India,” Birmingham added.

The visit marked the celebration of the Indo-Australian academic and research alliance. The TERI Deakin Nanobiotechnology Centre, the most advanced in the world, was inaugurated by the Indian and Australian Prime Ministers on April 10 after delegation-level talks.
Speaking on The Energy and Resources Institute (TERI) and the Deakin University’s collaboration on a Nanobiotechnology Research Centre in New Delhi, he said: “Collaborations like Deakin-TERI and the many showcased by the Group of Eight’s new Excellence in India publication that I helped to launch highlight the potential of research partnerships between Australian and Indian universities and researchers.”
TDNBC at TERI’s Green Campus in Gurugram, Haryana, is a pioneer research centre in the field of nanobiotechnology research in India.
The scholarships are awarded to PhD students engaged in research programmes at the TERI-Deakin Nanobiotechnology Centre. These students are currently enrolled at Deakin University under the Deakin India Research Initiative (DIRI), which was launched in India in 2009. DIRI builds on Deakin University’s world-leading expertise in material sciences, nanotechnology and biotechnology.
While addressing the gathering Minister Birmingham said, “The TERI Deakin Nanobiotechnology Centre facility is not incredible because we are commissioning bricks and mortar, it’s incredible because of the brains, the students, the knowledge that is embedded within the facility, and the potential that they (students) are going to realise in so many different ways.”

Under the program, each student is provided with a full tuition fee waiver from Deakin University up to an amount of approximately AU$100,000 for a period of three years. During the program, the students travel to Deakin University in Australia for a period of six to eight months during their Ph.D to work closely with their Deakin supervisor.
Elaborating on the scholarship programme, Vice Chancellor of Deakin University Jane den Hollander AO said, “The three-year scholarship programme is predominantly designed to equip the best of the talent with advanced research facilities. Under this programme, Deakin University and TERI will provide joint supervision to the students. TDNBC envisions meeting the demand for a global, skilled workforce in nanobiotechnology.”

TERI Director General Ajay Mathur further added, “Within five years, the Centre aims to have a number of researchers, including Ph.D students, enrolled at Deakin. With its cutting edge technology at the disposal of these bright minds, this Centre will help India make a mark on the global map for building new capabilities and bringing new innovations in the field of science and technology.”
Besides this, researcher’s residences at TDNBC with an accommodation for 50 residents, was also inaugurated by the Minister.

Australia will collaborate with India to build capacity of four lakh trainers and assessors over the next few years.
“We believe we can help because you recognise and acknowledge our experience in a very successful vocational education system,” Australian Minister for Education and Training Simon Birmingham said at the 4th Australia-India Skills Conference, 2017, held in conjunction with the visit of Prime Minister of Australia Malcolm Turnbull to India.

Birmingham said Australia is well placed to help India in reaching its target in training, and added that the programme would also look at scaling up the number of apprentices in India.Speaking on the occasion, Rajeev Pratap Rudy, Minister of State (Independent Charge) for Skill Development and Entrepreneurship, said: “For very long, in India, education did not carry the skills along. Skills never got the focus that it should have.”
Rudy said India need to train 400 million people in organised and unorganised sector.
Talking on training Junior commissioned officers of armed forces as trainers and assessors to fill the shortage of trainers, Rudy said: “The young trained junior commissioned officers who have long trained in many technical aspects of Indian armed forces… generally they retire young after 20 years of service.
“So, we have partnered with Indian armed forces… we have established mechanism where these youngsters, who are to retire, within six months of their retirement they are put to certain courses where they can be trained as assessors or entrepreneurs or trainers,” he said.
“I think this programme is going very successfully now and we have launched several batches of such youngsters,” he added.
Rudy said the Prime Minister Narendra Modi wants to make India a hub for international work force.
The two ministers also launched ‘International Trainers and Assessors Training Courses’, a joint initiative between the Government of Australia and the National Skill Development Corporation (NSDC).
The conference was organised by the Confederation of Indian Industry (CII) in partnership with the Department of Education and Training, Government of Australia, under the ambit of the Australia-India Education Council.
— IANS