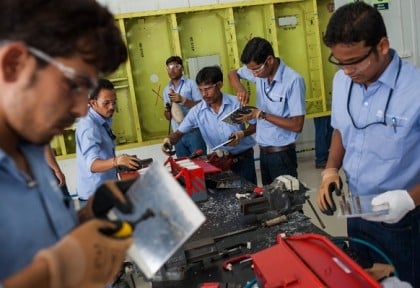 After PM Turnbull announces the abolition of 457 visas, India hints the decision may affect trade negotiations

After Australian Prime Minister Malcolm Turnbull announced that he will be abolishing the existing 457 Visa programme, currently used by temporary foreign workers to gain employment in the country, India has said it is examining the matter and consulting all stakeholders.

External Affairs Ministry spokesman Gopal Baglay said that the government was “examining consequences of the new policy in consultation with all stakeholders”.
“This is also a matter we will be looking at in the context of CECA (Comprehensive Economic Cooperation Agreement) negotiations (with Australia),” Baglay said.

The 457 Visa programme is used mainly to hire foreign workers in the restaurant, IT and medical industries and the majority of such visa holders came from India, Britain and China.
According to government statistics, 95,758 people were living in Australia under 457 Visa programme last year, with the highest proportion coming from India (24.6 per cent), followed by Britain (19.5 per cent) and China (5.8 per cent).
Migration agent Anisha Gupta told the ABC, the changing the visa system will likely hurt Australian universities’ efforts to attract Indian students, especially those seeking degrees in the 200 professions the Government is removing from the list of those eligible for skilled worker visas.
“That would affect the students if they think their occupations are out of the list, so they might choose another country which has a more favourable immigration policy for them,” she said.

PM Turnbull used Facebook to announce the policy, which he said would “put jobs first” and “Australians first”, signalling a reduction in the occupations available to skilled foreign workers and raising the threshold to qualify.
“We are putting jobs first, we are putting Australians first,” he said. “We are an immigration nation, but the fact remains that Australian workers must have priority for Australian jobs.”
Stating that Australian workers must have priority for Australian jobs, he said: “We will no longer allow 457 Visa system to be passports to jobs that could and should go to Australians.”
At a press conference in Canberra, Turnbull said the 457 Visa system needed to be replaced because it had “lost its credibility”.


The scheme will be replaced by two temporary visas that will impose tougher English language tests, stricter labour market testing, at least two years of work experience and a mandatory police check.
The numbers of jobs eligible for the two-year and four-year visa streams will be slashed, with 216 occupations ranging from antique dealer to fisheries officer to shoe-maker, axed from a list of 651 professions on the list.
Accounting giant KPMG criticised the decision, saying “there is no evidence the current system is not working”.
However, Turnbull dismissed that claim, arguing the abolition of the 457 Visa regime was “a decision of my government… this has been a careful exercise in policy development”, reported the daily.
People currently on a 457 Visa, which lasts for four years, will be exempt from the new regulations.
Immigration Minister Peter Dutton said that for the two-year stream, which could be renewed for two years, “there won’t be permanent residency outcomes at the end of that”.
“In relation to the medium-term stream which, as the Prime Minister pointed out, is targeted at higher skills, (there will be) a much shorter skills list.”
He said the government would work with companies to ensure they met labour market testing requirements, and warned “there will be a particular focus on companies that have an unnecessarily high proportion of 457 or foreign workers in jobs as well”.
The 457 Visa programme was introduced by the former Howard government in 1996-97.