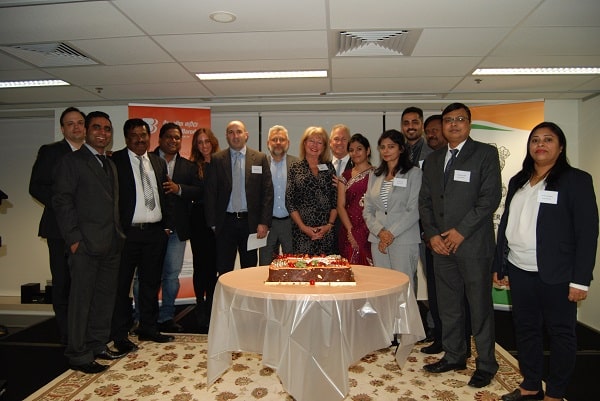 Reading Time: 3 minutesIt was a day filled with nostalgia and pride as the Sydney office of Bank of Baroda celebrated the institution’s 110th foundation day on 20 July.

A business seminar that was organised on the occasion saw the attendance of Consul General of India in Sydney, B Vanlalvawna, representatives of Australian Prudential Regulation Authority (APRA), leading businesspersons, office-bearers of various trade and business bodies, officials from various financial institutions and a handful of the bank’s long-standing customers.
The entire team of Bank of Baroda’s Sydney office, led by its Chief Executive Kavita Singh, was also present.
In his brief but impactful address, Vanlalvawna praised Bank of Baroda for its role in India’s banking sector. He also took the opportunity to call on the Australian business community to invest in India. “This is an immense opportunity to boost India’s infrastructure and skill development,” he said, and wished Bank of Baroda success in the years to come.
Singh then made a presentation about the bank, its history and its creditable progress over the years. “The bank was set up in 1908 was Maharaja Sayajirao Gaekwad in Baroda. Today, it has over 5,530 branches in India and 126 branches and offices in 27 countries around the world. The Sydney branch started on 17 November 2012. As of March 2017, it had done a business of $360 million,” she said.
Singh added that the bank’s Sydney branch was not only actively helping its Indian customers, it was also simultaneously focusing on extending financial assistance to Australian businesses.
“We want to play an active role in Australia’s economy. We want to help set up businesses which will generate employment,” she said. She said that the bank had a wide range of clients in various sectors such as manufacturing, trading, SMEs and start-ups.

The bank also has a range of attractive services for NRIs. “We take deposits and offer the highest rate of interest of 3.10% (based on tenure) among all other Indian banks. As part of a special festival offer that runs until 19 October 2017, we are offering an additional 0.10% over this,” she said.
The bank’s remittance service is also preferred by many for its economical rates, security and quick processing. “We offer the best exchange rate among Indian banks, have a low fee of $4 for existing customers or $8 for non-customers. As part of our festival offer, we are offering first four remittances free for any new customers. If our existing customers refer us a new customer, they too will get an incentive,” she added.
Singh’s presentation was followed by officials and representatives from various institutions offering their congratulations to the bank for its journey and wishing it success for the future.
A few customers also spoke about their long-standing relationship with the bank and how association with it had made a positive impact in their lives, be it by extending educational loan for higher studies, business loans to set up a new venture or even remitting money from abroad to India.
The event fittingly concluded with the cutting of a cake to mark the bank’s ‘birthday.’