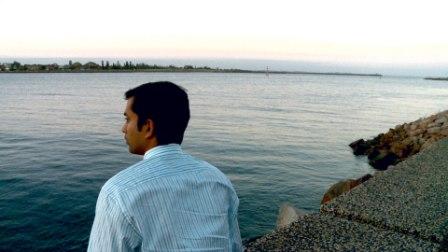 The film Sunshine and Shade opens with a shot of the Visa Temple in Chilkur, India, showing rows of Indians praying to ‘Visa Balaji’ for the proverbial golden key – a visa. Do they really find the sunshine they expect in a foreign land, or are there more shadows than they imagine?

This documentary by film-maker Ana Tewary attempts to find out by chronicling the life of two Indian students in Australia, and their experiences here. As the opening film in the South Asian Film in Focus program of the Parramasala Film Festival, Sunshine and Shade opened to a full house on November 9.

The film focuses on two students who come to Australia from India – Kanishk Kumar is doing an MBA in Marketing at the University of Newcastle, and Sharn Chahal is enrolled in a vocational course in Accountancy in Sydney.

The life of Kanishk proceeds rather smoothly for the main part, filled with positive experiences. His chance encounter with Bob Stewart is an example. Bob, a resident of Newcastle is concerned about the spate of attacks on Indian students and decides to do something about it. He and his friends host a luncheon for the Indian students in the university and give them their first taste of Australian hospitality. Kanishk, on completing his course, lands a job in Sydney after much difficulty, but decides to quit after a few months and move back to India.

The story of Sharn on the other hand is one of struggle, as she grapples daily with the reality of living in Australia. She comes to Australia with the aim of getting a PR, a passport to what she believes will be a better life. She struggles to make ends meet and works at various menial jobs. She gets married too, and in the process of trying to get her husband a visa to Australia, gets cheated by an agent. She even gets a shot at her dream job, an unpaid internship at a community radio station which she is unable to take because of financial constraints. She too finally decides to go back to India.

Both students talk about the lack of support from the local Indian community, and Sharn talks of how Indian students are exploited by Indian business owners in Australia.

Another central character in the film is Alex Gollan, an anti-racism activist, who has formerly been part of a racist gang himself. The film chronicles his journey and the problems Alex faces on having crossed over to the other side – death threats and abuse. They finally take a toll on him and force him to withdraw from active campaigning.

The film also suggests that the attacks may not be purely racially motivated. It records the official point of view from various government representatives and researchers who suggest that they also depend on the locality, place of work and mode of travel of the students.

The cinematography captures the day-to-day lives of the students wonderfully, with some beautiful shots of the harbour and the ocean as a backdrop. The editing is slick and keeps the film moving at a fast pace.  The background score remains muted and truly in the background.

The screening was preceded by a captivating performance of a poem by slam poet Amna Bilgrami, also featured in the movie.  The poem talks about the conflict between the races, between ‘colonizer and colonized’, and how that mindset is still prevalent.

The discussion post the film centered on the experiences of students in Australia. But the star of the show was undoubtedly Bob Stewart or ‘Bollywood Bob’, as he is now called by his friends although he claims he is ‘just an ordinary bloke’.

The film incorporates diverse points of view, in an attempt to look at the story from all angles; at some points they seem a little too many. But the lives of the two main characters have been beautifully etched and we are offered a window into their lives, and experience their little bits of sunshine and shade. In the end we are left with a sense of disappointment at the waste of time and money that has gone into their study here.