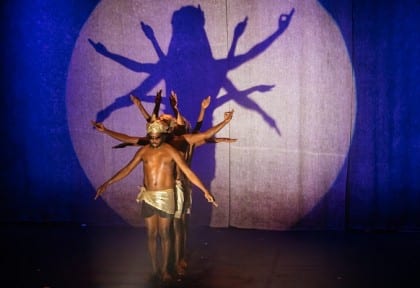 We arrive at Sydney Opera House for an Aboriginal dance show called Djuki Mala, not really knowing what to expect.
It starts sombrely enough with a traditional dance – there’s painted bodies and spears, clapstick sounds and foot stamping, and graceful body movements imitating animals and birds. This is Djuki Mala or ‘The Chooky Dancers’, as they were first known, Yolngu dancers from far north Arnhem Land.


But things don’t stay serious for too long.
The dance changes tone, to an exuberant rendition to the theme song of Zorba the Greek!
In what follows, we see Gene Kelly in the old classic Singing in the Rain, and moonwalking to Michael Jackson’s tunes, hip hop, freestyle and Motown. You have it all in this mashup with a distinct ‘chooky’ touch.
But what comes next, is the most surprising.
With their shorts now covered in gold lamé, wearing sunglasses and gold turbans, they are dancing to a Daler Mehndi Punjabi number!
I run into Joshua Bond, the director of this joyous dance show, in the foyer later, and ask him about this Indigenous-Bollywood fusion.

Joshua laughs and explains, “Out there on Elcho Island, we speak many Yolngu languages. In fact, even English is way down the list of spoken languages. The Bollywood medium of story-telling through music and dance resonates with our people. You don’t need to understand Hindi to understand the story, the emotions or follow the narrative.”
The other Indian connection to Djuki Mala, is Director of Photography, Naina Sen. Her connection to Arnhem Land and the Yolngu people goes back over ten years. As a young filmmaker, Naina ventured into Northern Territory, following what seems like a primal instinct to connect to the ancient Aboriginal culture. Naina found that Bollywood films are very popular with the Yolngu people and Aishwarya Rai and Amitabh Bachchan are household names.
“Yolngu people are such performers,” says Naina. “They have such a flair for the dramatic, just like Indians. Hearing the numerous languages spoken there reminded me so much of India. I found myself in the remotest part of the Australian continent, feeling closer to home than I ever had.”

Her three-year work on the renowned reclusive Aboriginal singer, Geoffrey Gurrumul Yunupingu, who also hails from Elcho Island, brought her close to this small community. This understanding of their culture was what drew Joshua to work with Naina, who filmed the stories narrated in Djuki Mala. The interviews with community elders and the dancers are filmed up close, creating a raw, honest narrative that gives one a first-hand account of their story.
In the show itself, the stories behind their unique dance routines are projected onto the screen, interspersed between each dance, gave us insights into life at Elcho Island.  We learn that their first dance to the tune of Zorba the Greek became a YouTube hit with 2.5 million views. It was created by Djuki Mala dancer Big Frank’s son, Lionel, as a ‘thank you’ to the Greek carer of his ailing sister. If Lionel’s mum, Margaret, hadn’t taken the shaky video of her son and his mates dancing to Zorba the Greek on her mobile phone, and if Big Frank hadn’t uploaded this video to You Tube, none of this would have happened.

We come out of the show not only invigorated by the infectious vim of the athletic dancers, for whom rhythm is second nature, but also with a better understanding of the Yolngu culture. These men don’t deny the problems that exist in their lives in remote Australia, where jobs are few and petrol sniffing and high rates of youth suicide are a reality. On Elcho Island, life expectancy is low. However, they have chosen to transform their lives through their dance. They are a source of inspiration for other kids who also choose to dance their way to a healthier life.
Since 2007, these cheeky Chooky dancers have travelled to many countries with these shows that beautifully combine interpretations of popular song and dance with their own stories and dances, offering an insightful view into Aboriginal Australia.
- Advertisement -
Share
WhatsApp
Facebook
Twitter
Linkedin
Previous articleHealing hands for troubled eyes
Next articleCensus 2016 shows Australia’s changing religious profile, with more ‘nones’ than Catholics