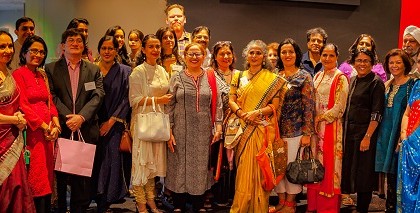 Strong family ties constitute the basis on which South Asian societies are founded. A new community resource, Vatsalyam seeks to celebrate the enduring value of positive parenting and the lasting bond that exists between mother, father and child.
Vatsalyam: South Asian expressions of parental love, a short film on traditional cultural practices adopted by migrant families in raising their children here in Australia, was screened at Riverside Theatre recently as part of the South Asian Film Festival. Academic and author of Permanent Resident, Roanna Gonsalves launched a DVD of the film.

Directed by human rights activist and domestic violence campaigner Amrit Versha, the film is an initiative of SAHELI/SEVA, NAPCAN, CMRC and Third Space Productions.
“Aiming to bridge the gap between service providers and communities regarding cross cultural child rearing experiences, this film emerged from several years of community development work by prominent South Asian academics and social workers,” SAHELI spokesperson Shanta Viswanathan told Indian Link.
“Earlier last year, supported by the Community Migrant Resource Centre, we ran targeted parenting programs for South Asian families living in the Northern Sydney region.”
“In the course of our work, we identified an urgent need for an educational resource that would explore cross-cultural child rearing experiences for the communities to share and learn from each other. A working group was established and Vatsalyam was conceptualised,” she explained.
Sensitively portraying intergenerational perspectives that acknowledge the importance of culture and heritage in building stronger families and communities, Vatsalyam weaves together deeply personal stories, values and ideology of South Asian parents and grandparents as they combine traditional practices with contemporary ideas to raise resilient citizens.
The message that resonates throughout the film is that the South Asian diaspora in Australia is changing and that migration strongly influences the way children are raised across generations.
Whilst South Asian communities share many common rituals and practices that celebrate motherhood and a child’s early years, cross-cultural activities around every day parenting are extremely diverse, Vishwanathan said. Significant celebrations mark milestones and are powerful expressions of love towards both the mother and child.

“Even in western medicine, there is now a greater acknowledgement of the biological, social and cultural influences on the mother-infant dyad, the role of psychosocial support in the perinatal period, and that early influences on the infant have long lasting consequences for health and wellbeing in later life,” noted community paediatrician Dr Shanti Raman.
Dr Raman’s extensive interest in cross-cultural influences in child rearing and child development and behaviour led her to join the working group.
“Having spent the last 20 years practically experiencing it as a paediatrician, researching and teaching about this issue and community, I got involved in this project because I was interested in exploring a strengths-based approach to child protection work.”
“Too often we hear about the deficits and the negative influences on children’s lives. We know from the cross-cultural research evidence-base, that children with a strong sense of cultural identity do well. I know from my own experience and research that there is a rich repertoire of cultural practices throughout the perinatal continuum as well as the early years of life throughout South Asia, with evidence of change,” Dr Raman said.
“We wanted to explore South Asian families’ stories of child rearing in the context of migration, in particular highlighting positive parenting practices. We wanted to showcase the child celebratory rituals and cultural practices that are still relevant for South Asian families even in the twenty first century – these are expressions of parenting love,” she added.
At the film’s launch, a stimulating panel discussion was followed by Hamsa Venkat’s solo performance of Bharatiyar classic – an ode to motherhood.

“It was great that we were given a platform at the Parramasala festival to launch a community film to address local social issues,” Viswanathan said.

Meanwhile, the working group has met with interest from several service providers in this educational resource. Subsequent instalments exploring the role of fathers, as well as one targeting adolescent children, are also being planned.
“We look forward to working together with these organisations and the community to address social issues that affect our communities,” Shanta Viswanathan added.