This could be your story! 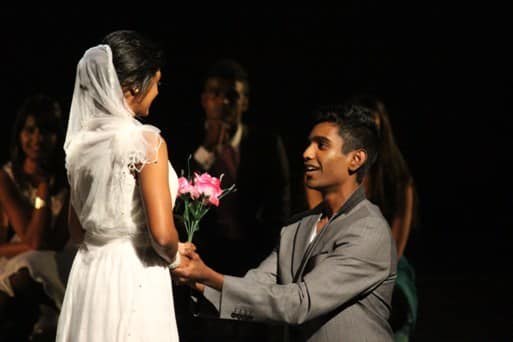 The youth group MAYA Youth in Performing Arts staged their play About A Brown at NIDA’s Parade Theatre on July 12-13. The evening show on July 13 was packed to capacity with the foyer in the theatre bustling with all kinds of drama/art enthusiasts and in all colours – not just brown, but black and white too! After a very informal introduction by director Lakshman Nirthanakumaran and producer Maathumai Nirmalendran, the play began with the narrator introducing the main protagonist, Abhinav and the typical morning in a ‘subcontinent’ family. From the get go, the characters built a rapport and a connection with the audience, as they drew them into their fold, discussing their problems, seeking for solutions and at times even making the audience their confidants. The omnipresent narrator injected humour into every conceivable situation.
About A Brown is the story of Abhinav and the different people in his lives. Not all of them are important to him, but each one of them comes with a message. While Abhinav is the typical run-of-the-mill character who is mollycoddled by his mum every morning and is in a constant fear of disappointing his parents, his brother Varun flatters himself into thinking he is ‘the guy’ that girls would be interested in. Unfortunately for him, reality is a far cry from his fantasy. In fact, his parents decide to find him a bride who he fears would soon turn into a ‘curry mummy’ and haunt him forever. Then there is Ariya, who falls for the wrong guys all the time and stresses over it. Poor Ariya! She just can’t help herself. Her friend Ash is so consumed in self-pity that she is even unable to enjoy the party she hosts for her own benefit. Then there is Pradeep, a self-proclaimed poet and the focus of Ash’s affection. And of course Nikhil and Boots – Nikhil who can’t stop talking about becoming a doctor and rattling out his family lineage crowded with doctors at the drop of a hat, and Boots who is always looking for her runaway cat (she decides to buy a pup by the end of the play). At one point, the writer even manages to introduce a typical love triangle of sorts where Pradeep is in love with Ariya and Ash is in love with Pradeep. As is customary, the play ends with all knots untied and all messes untangled.
About A Brown is more than just a play, in fact it is a juxtaposition of a play within a play, and a playwright in search of a credible story. Most of the ideas/concepts presented are mundane, but the originality of presentation laced with subtle humour lifts it to a different level, making it an unforgettable experience. The characters of the play relate so closely to real life personalities that the audience may have been laughing at themselves or the situations in which they may have often found themselves!
The live band, singers, dancers, the deft and quick change of scenes and stage management all gelled well and appeared synchronised.
About A Brown came with the message of multicultural synergy and crossing all boundaries to serve the greater good. The choices one makes defines one’s personality, reflects one’s culture and conveys how ‘Brown’ one’s life may be.
MAYA, Youth in Performing Arts supports the International Medical Health Organisation, and through the staging of the play, raised nearly $15,000. To make this possible, the organisation was supported at every step by the local community and some very philanthropic organisations and individuals. The caste and the crew minimised all sorts of overheads by using community venues for rehearsals and pooling in resources for props, etc. The project not only showcased the talent of over 80 young people whose contributions at different stages and in different roles made the play a reality, but brought to the forefront the power of youth and what can be made possible when actions are driven by determination, and the desire to make a difference in the lives of those in need. Every member in the audience walked out of the hall with a smile on their faces and a grin of satisfaction. That is a mighty achievement.
Photos: BAVE; Cowlickflicks