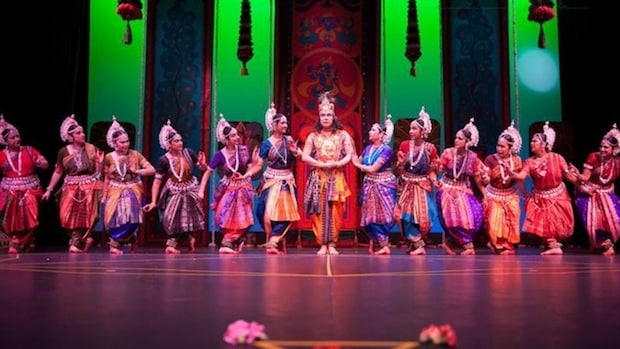 Gita Govinda is a collection of poems in Sanskrit by the great poet Jayadeva who lived in the 13th century around what we know today as Odisha. The poems are known for their lyrical beauty and evocative passages. His Dasavatara verses extol Lord Vishnu’s ten incarnations, although he has become synonymous with shringara on account of his privileging Radha’s love for Krishna in most of the divine songs. They are imbued with love, longing and reunion, symbolic of the soul’s longing for the dark-hued Lord. Those of us familiar with Indian classical dance, know that songs from the Gita Govinda are popular with most of the dance genres, especially Odissi.

Chandrabhanu’s classical dance company and the Jambudvipa Ensemble recently presented two evenings of Gita Govinda in Odissi at the Rennaissance Theatre in Kew on 12 and 13 September. The evening began with the Dasavatara by the talented dancers of the Bharatalaya Academy, an item which beautifully depicted the 10 avatars of Lord Vishnu. This was followed by accomplished individual dance items from the Gita Govinda, performed both solo and as a group.

The production also featured live music composed and sung by the acclaimed vocalist Krushna Chandra Ray, who was accompanied by a gifted orchestra of musicians from Orissa including the sitar, violin, flute and pakhawaj. The lilting music in soulful ragas added to the rasika‘s enjoyment. Ambika Docherty was the ‘nattuvangist’ who held the performance together.

Rama: The Prince of Power, was a much awaited production of the youth wing of Chinmaya Mission, and it ran for two days, 20 and 21 Sept, at the George Wood Performing Arts Centre in Ringwood. Done entirely by the young volunteers of the Mission, it was a delightful, entertaining and engaging drama-cum-dance on the great Indian epic. There was standing room only at the large auditorium on both the days, and the two-and-a half-hour play was a huge success by any standard. It was well arranged, choreographed, directed and produced in English by a group of Melbourne’s own talented Chinmaya volunteers, and it was able to capture the imagination of the young and old who filled the Arts Centre over the weekend.

The entire cast did an excellent job; and with the dialogues in English, they managed not to sound too stilted – no mean achievement! There was minimal conversation, and the emphasis was, quite wisely, on action: the dancers were particularly striking, and the battle scenes very cleverly executed. The enthusiasm among the audience was palpable, and they joined in when cheering Lord Ram and Hanuman, or applauding their feats and revelling in their victories! Everything from the costumes to the backdrop (the projection of appropriate slides allowed the producers to make do with minimal stage sets), music, and the scene changes was done with the utmost attention to detail! It was a Ramayan par excellence, and it deserves to be seen by audiences all across Australia.

Because of popular demand, there is a likelihood of this dance drama being performed again in April 2015. Anyone who wants to convey an expression of interest can email:

InConcertMusic presented a Carnatic vocal concert by S. P. Ramh on 13 September at the Wellington Secondary College. S. P. Ramh is a talented vocalist from the legendary Lalgudi school, and his performance that evening bore all the hallmarks of that parampara.
He began with a charukesi varnam, followed by the popular kriti ‘Vallabha Nayaka’, both imbued with classicism and melody. Other popular compositions were similarly rendered, be it the Hamsanandi, Vasantha Bhairavi or the Dhanyasi pieces, which he embellished with alapana, niravals and kalpana swaras. The Bhairavi item, ‘Bala Gopala’, was the piece de resistance, as he gave it the full treatment: a masterly alapana, finished with complex kalapana swaras. The ragam-tanam-pallavi was in Shanmukhapriya, and it was a polished gem.  Other concluding items all got the Ramh treatment, and was enjoyed thoroughly by the discerning music-loving crowd.