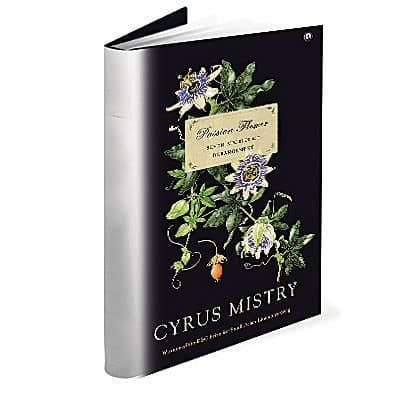 Reading Time: 3 minutesPassion Flower: Seven Stories of Derangement is a meeting with the darker side of human kind

There is a wicked demon in all of us. Lying dormant somewhere, only partially active, at times justifying our actions or lamenting and bemoaning about cruel life and not ready to be confronted. Traces of these dark shades are part of the human psyche. Unapologetically exposing these crude realities is Cyrus Mistry’s collection of short stories.

After winning the Dave, Shelly and Chainsaw (DSC) Prize for South Asian Literature in January, the reticent author had hoped his collection of short stories would see the light of day. Although two of the seven stories have not been published before, it is easy to relate to each of them.

Can someone celebrate the death of a near one because it has given him freedom? How many times do we judge people on the basis of prejudices we have in our mind? How does the mind play clever games when we cultivate dubious thoughts? How can dominating relationships be a curse in personal development and how does greed take over everything else?

These are the questions each story poses and solves gradually, leaving the reader bewildered at the craft of the Parsi author whose strong storytelling slowly reveals information about his characters. Like many layers of an onion, he peels them one by one, adding nuances, time travelling and with a bit of magic and myth.

Simple in narrative, with Parsi characters doing all the chatter, the 199-page novel is a meeting with the darker side of humankind. The first story, Percy, elaborates on the strong bond between the protagonist and his mother.

The local people often mock a shabbily dressed, unattractive man, who is scared of his mother. Secretly, he develops a passion for gramophones – and then after his mother’s death his life takes a different turn.

Unexpected Grace is about how a woman, alone at home with her newborn, is going hysteric. Suspecting her husband is having an affair, she is close to going mad. In describing what she is going through and how her mind is instrumental in planning some cruel actions, Unexpected Grace touches upon the delicate thread of complicated married relationships and the insanity people go through if the seed of suspicion is sown in a relationship.

The story of two friends in Two Angry Men has been published for the first time. It scrutinises the relationship of two school friends who are working together in a company. In this open-ended story, exploitation at the workplace and the naivety of men at work is narrated in a frank manner.

The novel got its name from another original story, Passion Flower. Again, the complexity of marriage, greed to achieve and be popular, and unjustified prejudices towards others is the main plot, where the protagonist is struggling to achieve what he had desired.

Amid these realistic cues from everyday life, these stories straddle between the thin line of fantasy and reality. The presence of ghosts, supernatural characters and eerie settings have been beautifully woven in these stories, where they come across as believable characters and not as forced entities.

What is beautiful is that each story has a moment that we all can identify with, but do not easily admit to agree with.

Mistry possesses an exceptional gift for story-telling that comes from minute observations of life and human follies. These seven stories highlight the fragility of relationships that shake at the altar of egos, misconceptions and derision.