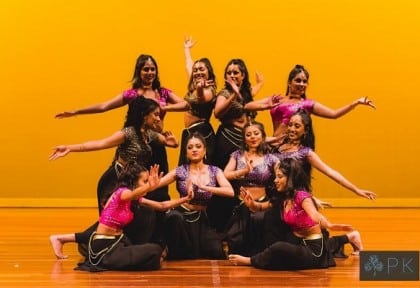 The Melbourne Uni Indian Club and the Monash Uni Sri Lankan Cultural Club got together again this year to showcase the talent of Indian and Sri Lankan students through the Maha Milan event.
All the funds raised went towards a great cause, Project Burans, an organisation to help support and raise awareness about mental illness in Uttarakhand, India.

A much anticipated event on the students’ social calendar, Maha Milan lived up to its name yet again – a ‘mega party’.
The show opened with Dilrook Jayasinha, an up and upcoming stand-up comic who had the audience in stitches throughout. Equally successful was the singer Arjun Murthy, whose melodic and soulful singing won the audience over. If everyone was a little judgemental when he came on stage, they were left dumbfounded when he opened his mouth to sing. He played an acoustic rendition of John Mayer’s ‘Comfortable’. Playing the guitar as he sang, he held the attention of every person in attendance that evening. Behold, this might well be the next John Mayer!

Mixing a variety of different dances the BollYonces got the audience clapping and singing along. Although they met with an unfortunate technical failure mid-performance, they were able to get back up and start again with the same enthusiasm and excitement as when they first began. Beginning with hip hop, they demonstrated their skills in dance by mixing in Bollywood and Sri Lankan dances. Their performance was filled with grace and technique, their expressions clearly showing that they were enjoying themselves as much as we were.
In comparison to last year, some items left us wanting more, whereas others filled us with mixed emotions.

Choreography in some instances was messy: the classical and modern elements did not gel in some numbers as well as they did in others. And perhaps a bit more attention could have been given to costumes?
Mashallah! Now this was a group that took us from north to south through their dancing – Humara dil lootliya with Badtameez Dil. Their performance was amazing and breathtaking. Energetic and enthusiastic, the dancers had us nearly out of our seats and clapping and whistling along. They performed with grace and skill, truly a tribute to the art form.

It was a booming end to the show with the Melbourne Bhangra Regiment. They came on to the stage in their bright colours, with knowing smiles on each of their faces. Their confidence, and the start of the dhol beat, was enough for them to have the audience eating out of their hands – they just took everyone’s breath away. Simply amazing. Each step executed with perfection, their technique and elegance were immediately appealing. It seemed effortless, though we all know the hours, days and months of practice. A flawless performance. Bringing the essence of India and showcasing their amazing talent, Melbourne Bhangra Regiment left us wanting more.

There are some special mentions for some more heartfelt and moving performances. Western Raaga combined western and Indian music, giving it a new meaning as they flowed from one song to next. An emotional performance as their feelings came through in their singing.
Munky performed a Coldplay medley. It was a simple and soulful yet elegant performance by the two female singers. They gave a touching performance, their voices sweet and refreshing as a wave of silence fell over the auditorium.

Overall, it was an amazing night, opening with a great MC Dilrook Jayasinha, some great performances and then ending the night with a bang. There was room for improvement, though, but Maha Milan 2016 did not let us down. It was also a wonderful way for the youth of our community to support a worthwhile social cause.
Can’t wait for next year!