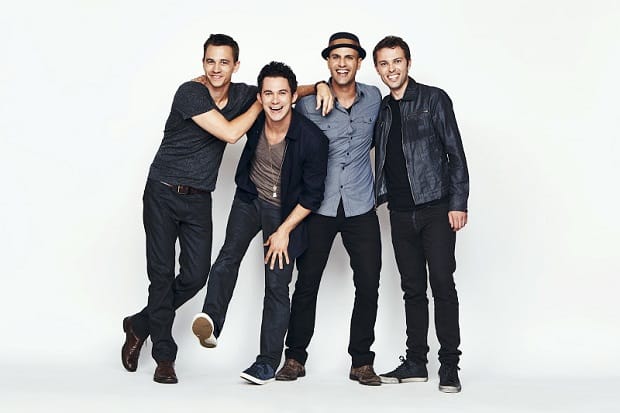 Reading Time: 3 minutesA dash of illusion, a bucket-full of deception and a pinch of magic creates a truly contemporary style of one-up-manship. BY LENA PEACOCK

Dynamic. Contemporary. Band of Magicians are what some are calling the first boy-band of the magic world, or as they describe themselves, ‘The World’s First Magic Supergroup’.  Americans Justin Willman, Nate Staniforth, Justin Flom and Australian James Galea have already impressed the eyes of America, and now they’re heading to Sydney for summer. Bringing a new meaning to the usual one-upmanship that occurs over one’s cricket skills (or ability to recount the latest match in the most detail possible) these boys will show off their magic tricks, illusions and deceptions together for the Sydney Festival.
“There’s no such thing as magic, it’s all just illusion,” says James Galea, who wants his brand of illusion to break all of the clichés of pulling rabbits out of hats. When even Ellen Degeneres tells you to “Wait ‘til you see James Galea, he’s not like other magicians. He’s not creepy,” you know that what’s in store is something just a little bit different and exciting than creepy men hiding cards up their sleeves and birds in their hats.
Galea began performing magic when he was 14, which he says is a lot later than most kids who get their first magic kit. He had someone take him under their wing to teach him all about the world of magic, which he later learned was a conman, of all people. So Galea had a slightly different start from the usual innocent card trick. Galea also tried out comedy and acting before he turned to magic, which might explain his charismatic stage presence. But when he first started out, he had to look to American magicians, as there wasn’t much going on in the Australian scene at the time.
Responding to the question of what he does for a living, his answer of ‘magician’ was always met with ‘what kind of instrument do you play?’ Now he can say he’s both a magician, and in a band, with a smirk.
Nowadays, Galea is known as Australia’s number one magician. “A year ago I sent an email to three of the best magicians in the world whose work and style I’d respected and admired,” he recounts. “I asked if they’d be interested in putting our collective talents together to create something greater than the sum of its parts. I likened it to a group of jazz musicians who all played different instruments coming together to play the same song, and how much more amazing that is, than a solo. That’s how Band Of Magicians was born,” he adds. Created just a year ago, the show will highlight their individual acts, as well as new ones they’ve created together.
“Magic is different from music in that it’s difficult to collaborate,” says Justin Flom of their band. “That’s why this is so fresh and new. These guys are the best and I’m so pumped to perform with them. At one point, the whole audience will have magic happen right in their own hands. You have to experience it!”
“We each approach the craft in a different way, we each have our own ideals concerning what makes a good illusion, and the power that comes from joining these four visions together into one show has allowed us to create something that none of us would have ever come up with alone,” explains Nate Staniforth.
“Magicians almost never collaborate,” continues fellow American from the group, Justin Willman. “Combining the forces of four likeminded, yet unique performers creates a product that shines brighter than any one entertainer could create. It’s the ultimate meeting of the minds, and it has never been done before,” says Willman. And because he thrives on audience participation, he can’t wait to meet the “people of Sydney, one at a time, on stage, and frying their brains”.
“I’ve been living in Los Angeles for the last five years, so I’m super-excited to be bringing Band Of Magicians home for its World Premiere at the best time of year to be in the city, and show it off to the guys,” finishes Galea. You just can’t beat ‘summer and Sydney’!