Songs of the Soul 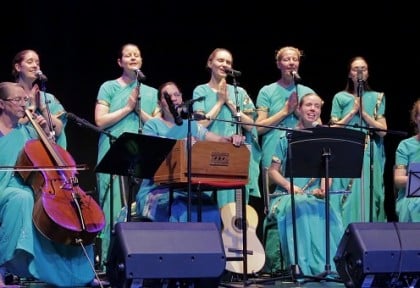 A group of international musicians who interpret and perform the compositions of Sri Chinmoy, Indian musician and meditation teacher, Songs of the Soul have performed more than 200 free concerts over the past seven years throughout Europe and North America. Their tour of Australia and New Zealand in November gave listeners the chance to be uplifted and enchanted by Sri Chinmoy’s haunting compositions.

Featuring classical performers, soloists on erhu and harp, cello, a cappella singers and contemporary ensembles, Perth was the last leg of their journey which also included Christchurch, Auckland, Brisbane and Melbourne. The performers put together a concert that was a richly diverse and inspirational experience. They came from afar with Canada, Great Britain, Austria, Switzerland, Czech Republic, Germany and New Zealand all represented in the entourage.
Highly regarded for his creative capacity in art, literature and music, and for his tireless commitment to peace, Sri Chinmoy himself performed hundreds of free concerts during his lifetime. He believed, “Music is the universal language. Soulful music is next to meditation, and it carries the beauty and fragrance of silence.”

Many famous composers and musicians have commented on Sri Chinmoy’s music.
Leonard Bernstein said, “What power is in this man’s music! My musical spirit is very, very deeply impressed.” Flute player Paul Horn remarked,“Sri Chinmoy himself is music… his music is very healing, an experience in my heart and beyond words.”
Due to the overwhelming response, the evening concert at John Inverarity Music Centre in Perth was booked out and a second matinee concert was added. An audience of over 600 saw the musical treat from the ensemble.

“We had an amazing time in Perth,” said concert producer Projjwal Pohland, who runs a printing press in Germany as his day job. “It was one of our best cities and a great way to finish the tour.”
Let’s hope they visit again next year.