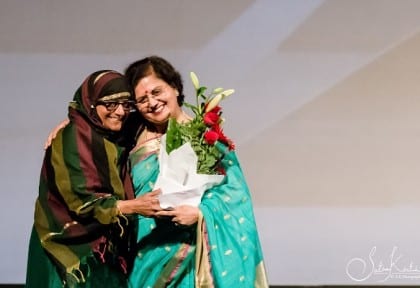 Hindi Samaj of WA struts its stuff at Indradhanush

There’s oodles of talent in Perth’s Indian community and thanks to Hindi Samaj of WA, we got to witness some of this recently. HSWA’s “Indradhanush 2017” wowed the audience awestruck with its resonating talent.


HSWA has been active in Perth for over 20 years now, promoting and supporting the Hindi language, literature and culture among Indians as well as non-Indians. Among their many activities, they operate the Hindi school Paathshala which has 66 students currently enrolled, and bring out an annual Hindi magazine Bharat Bharati. They also conduct many not-for-profit events, one of which is Indradhanush.  Events such as this allow for students and participants to present their talent to the community.

The show began with a traditional Ganesh Vandana and both national anthems, followed by welcome by president Vinod Aggarwal and a note by the Consul General of India (Perth) Amit Mishra.
Amongst the formalities was the presentation of the Volunteer Award to the much-loved Rajyashree Malaviya, who has been supporting the association for 25 years now.

It was an evening of back-to-back stunning stage presentations.
Amongst the dances, the kathak was superb. Beautiful costumes, crisp hand mudras, orhani and tikkas in sync with body flow – kudos, girls, it was a stunning presentation. Tisha Shah totally nailed her dance number based on Shankar Mahadevan’s Breathless. Ram Mrynal and Vishesh Singh with their groups came off well too. The Uttrakhand community, presenting for the first time, brought in a touch of folk, light and lively. Complimenting this, was the mood evoked by the Mauritian fusion dance – wonderfully zingy!

The musicians did their bit to add to the ‘rainbow’ of talent, again showcasing a variety. A strangely talented mother-son duo held the moment in their hands with their renditions of Aayat ki tarah and Lal ishq, the son striking the chords on casio.

Sandeep Boolkan (from Mauritius) channelled Kishore Kumar as he yodelled in Tere sang yara and Dekha nah aye re. On the other side of the interval, the audience sat drenched in the melody of ghazals by the hugely talented Amit Galib: that jugalbandi with Gurmeet Singh on the tabla, was jaw dropping.

And there was drama as well. The Paathshala kids performed Swaraj, a skit deeply soaked in the spirit of patriotism. The varied age of performers didn’t hinder the performance even for a second! Slogans like Vande Mataram, Jai Hind, Tum mujhe khoon do main tumhe azaadi doonga weighed heavy even though coming from such tender young mouths who couldn’t even utter them properly. The staged skit Kalyug ki Savitri by Prashant Tupe group and Sanskriti group went off well too.

Meanwhile, the witty MCs kept the crowd in splits, as they cleverly stitched the ‘rainbow’ together and connecting to all age groups in the audience with ease.
Closing note came in the form of a finale song by Vivek, Anurag, Sandeep and Nazrul.
Well done, HSWA: you left us feeling like we want to see more from this grand manch and its varied kalaakars. Looks like there’s a rainbow of opportunities awaiting the HSWA horizons.
- Advertisement -
Share
WhatsApp
Facebook
Twitter
Linkedin
Previous articleWhen community service defines your life
Next articleWomen’s business: The Aussie-Indian Women's Expo 2017