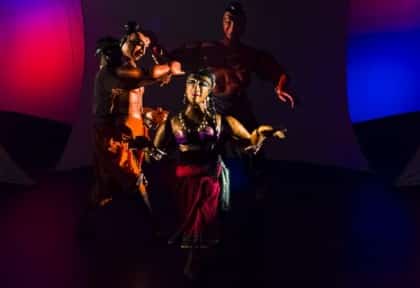 Pablo Picasso once said, “Everything you can imagine is real.” Bringing art and imagination to life on stage, in the form of puppets, is what Mr Dadi Pudumjee, the leading puppeteer in India and founder of the Ishara Puppet Theatre Trust, is best known for.

In Perth, the Confluence Festival of India in Australia concluded with its best kept secret,  Transposition at His Majesty’s Theatre. This theatrical magic cast its spell so stylishly, it seemed almost impossible to believe it to be surreal.
High Commissioner of India in Australia Navdeep Suri generously said that this Festival of art would strengthen the ties of the dynamic and vibrant dual cultures of Australia and India.
Indeed, Pudumjee melts traditional puppet art and moulds it into a contemporary art of today’s time using dancers, music, and body masks and presents a story using the language of gestures. This show was based on Rashna Imhasly’s book The Psychology of Love based on Vikram Betaal’s cycle of stories and Thomas Mann’s The Transposed Heads. This is a form of performing arts like no other.

The story unfolds as the performers narrate through dance, crisp hand movements, projections, and three large puppets. A dramatic background score keeps the tension alive.
The Brahmin intellectual Shreedaman, and Nanda, a farmer, are best friends and they bloom in each other’s company. Despite being unalike, they spend their time together. On their way back home from a fair, they stop at the Kali temple and run across beautiful Sita. Shreedaman is enchanted by her beauty. Nanda too falls in love with Sita but he sacrifices his desires for his friend’s passion.

Sita marries Shreedaman for his intellect but she craves for Nanda’s body. This triangular love story with a Freudian twist was presented so strongly that I had goosebumps. Keshav Gogoi and Suhail Bhan impressed in their respective roles.
Sita, played by Umang Gupta, embodied the plight of a torn woman through breathtaking dance moves and precise emotions.

Sawan Dutta’s musical hold was commendable as it brought the action to life. It was so staggering to see the art speak so powerfully.
A quote from the show still echoes in my heart, ‘Mind dies many times but bod