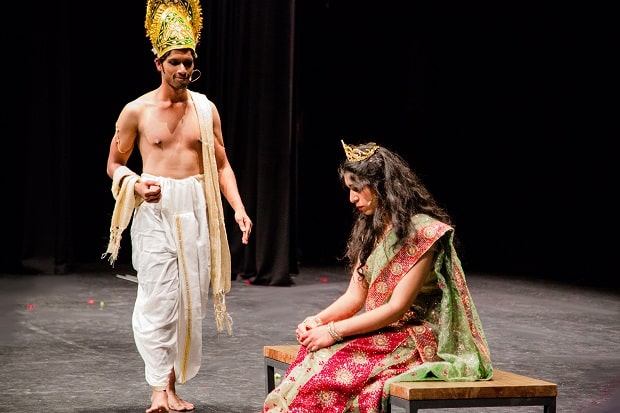 We know that the essence of the Hindu epic Ramayana lies in its prescription of rules for a healthy and ordered society. Its notions of justice and equality lay the foundations for a “Ram Rajya”, an idealistic society marked by peace, prosperity and tranquillity, that will create lands such as “Ayodhya”, literally, “the land with no wars”.

But delving deeper into the ancient text also unearths studies of the self: the juxtaposition of the individual in the family and in the wider society, the conflicts between duty and dignity and between faith and friendship, and internal struggles about the idea of sacrifice.

A recent stage production by a youth group looked at this aspect of the Ramayana.

The Indian student body of the University of New South Wales, Vishwaas, staged Fire to Earth at the university’s Science Theatre earlier this month. In a fresh approach to the age-old tale, the show captured the essence of the characters beyond their purpose of driving the story.

It had all the elements of the original tale, the wedding of Rama and Sita, the circumstances of the 14-year exile, the lure of the deer, the kidnap of Sita, the death of Jatayu, the defeat of Ravana, the Agnipariksha, the controversies surrounding Sita’s pregnancy, her banishment from the kingdom and the birth of Luv and Kush. But each of these was brought out for the metaphors that they are, as individuals make existential choices. It was interesting to see the students’ understanding of the characters as depicting tendencies within our own psyche, as we grapple with challenges that life throws our way.

Abhishek Bhovar, president of Vishwaas, impressed in the lead role of Rama. “Studying the scripture very closely while writing the dialogues, has widened my understanding of not only the significant Ramayana characters but also of the essence of our Hindu Vedas.”

Rathai playing Surpanakha did an excellent job for a negative role; as she approached her brother with her bleeding nose, it made for one of the more memorable scenes of the night.

Amanda, a student of Asian origin, portrayed Kaikeyi exceptionally well, not only understanding her character appropriately but delivering her dialogues through opera style expressions. Truly a noteworthy performance.

Now if only some of the cast could have got rid of their spectacles for one day!

Abhishek is grateful to the student base that enabled the project to get off the ground with connections, support, funds and other resources. He co-produced with Sanjana Kumar, Medhavi Gupta and Aanchal Chaturvedi.

Suvarna Variyar directed, and team managers Purnita Mane, Suchitra Kaushik, Rashmi Ranjan, Fiona Li and many others supervised various aspects of the production that all began some four months ago with nearly 80 volunteers. “For a majority of the cast this was their first time performing on a large platform like this,” Abhishek revealed later.

Bobby Kumar, one of the volunteers from the University of Sydney, spoke for many of his fellow students when he noted, “Having been born and brought up in Australia, we don’t get many opportunities to learn about our rich heritage and epic stories. Fire to Earth was a perfect opportunity to learn more about the minute facts I never knew about the Ramayana.”

Funds collected from ticket sales on the night were all donated to the Ekal Vidyalaya Foundation.

Photos by ASTHA SINGH and PRADEEP SEKAR. For more check out our Facebook page: https://www.facebook.com/IndianLinkAustralia