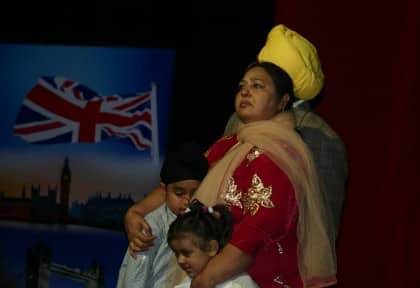 … is the definition of being a mother! A Punjabi play staged on Mothers Day

Ever escalating emotions built up to form a gripping narrative with Succhi Sanjh, a Punjabi play performed on Mother’s Day at the Drum Theatre in Dandenong.
This adaptation of the short story Rajai (quilt) written by Veena Verma, captures human relations and finds resonance with many in the audience.

Punjabi actors Anita Devgan and Hardip Gill have directed and scripted the play respectively, enacting pivotal roles themselves.
The plot revolves around Banto (Anita Devgan) whose husband (Karan Battan) leaves her and her two children to settle overseas. He remarries a local and abandons his family.
Banto somehow manages to find him in the hope that he will provide for her and her kids; however, he leaves her in a friend’s empty house and never returns.
Banto, who cannot speak the local language, seeks refuge with a neighbour who is an ex army man. Karnail Singh (Hardip Gill) offers them his home and eventually his heart.
The story dwells on Banto’s resilience to surface from her struggles and her life long bond with Karnail Singh.
Anita Devgan, also known for her role as Diljit Dosanjh’s mother in the blockbuster Punjabi comedy Jatt and Juliet, amps up the emotional response to every situation faced by her with occasional hints of melodrama.
Hardip Gill, actor and playwright, is well known for his acting in Punjabi films like Nabar, Punjab 84 and Hashar. He enacts the not-so-perfect knight in shining armour for the damsel in distress.

These two enormously talented theatres artists from India were able to hook the viewers to be emotionally vested in the characters that they portrayed.
Indian-Australian actor Karan Battan leaves an impression in his brief role as Banto’s heartless husband. Karan has acted in locally made films like Muqaddar, I Do Ishq Only Tumse, Khalish among others. He pulls off the subtleties of the negative role with good acting.

Relationships, tragedy, new hopes and sentiments entwine to create a well told but rather long story. It did not help that the play started over an hour after it was scheduled, for ‘technical reasons’.

Barkat Audio-Digital magazine, Melbourne were instrumental in organising the Australia wide tour of the play. They also coordinated theatre workshops for aspiring actors that were conducted by Hardip Gill and his wife Anita Devgan.
The show managed a full house in Melbourne making the day more special and memorable for many mothers in the audience. For the rest it made for some great theatrical escapism.