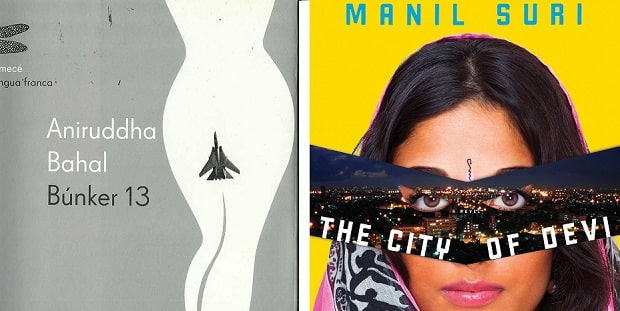 For those not familiar with Literary Review’s annual anti-award, it was established in 1993 by Rhoda Koenig and Auberon Waugh and aims “to draw attention to the crude, badly written, often perfunctory use of redundant passages of sexual description in the modern novel, and to discourage it”. Lady Diana, Princess of Wales even presented the award one year.

Critically-acclaimed writer, professor of mathematics at a US university, Man Booker a nominee and even shortlisted for the Faulkner awards, Manil Suri is now also the winner of a Bad Sex Award. Suri’s taboo-busting book The City of Devi, his third, is an apocalyptic thriller set in Mumbai. The famous, or infamous, depending on how you look at it, sex scene comes from an unusual love triangle including the narrator Sarita, her husband and a young gay Muslim man. Suri managed to woo the judges with the passage:

Surely supernovas explode that instant, somewhere, in some galaxy. The hut vanishes, and with it the sea and the sands – only Karun’s body, locked with mine, remains. We streak like superheroes past suns and solar systems, we dive through shoals of quarks and atomic nuclei. In celebration of our breakthrough fourth star, statisticians the world over rejoice.

How could this sexual explosion through time, space and consciousness, involving all of the characters of the book, not win?

Suri was not present to accept the award for his super charged work. Instead, novelist Joan Collins presented it to his publisher Bloomsbury, who accepted it on his behalf in London. During the acceptance speech the sex scenes in the novel were described as “unfettered, quirky, beautiful, tragic and wildly experimental”.

Aniruddha Bahal’s 2003 espionage thriller Bunker 13 (Faber & Faber), also went on to win the Literary Review‘s Bad Sex Award for its take on sex, drugs and corruption in the Indian army. A part of the winning section of the novel is:

She picks up a Bugatti’s momentum. You want her more at a Volkswagen’s steady trot. Squeeze the maximum mileage out of your gallon of gas. But she’s eating up the road with all cylinders blazing.

Cars and sex seem to be a winning combination in Bahal’s novel, even if it does make one wonder what type of a Volkswagen he wanted? Perhaps a slow and steady kombi van?

Bahal even decided to publish a tongue-in-cheek piece on outlookinindia.com regarding his expectations on winning the prize:

My source also told me that he had it on good authority that the winner of the award some years back was trailed by five beautiful and luscious women to the hotel from the evening’s venue and taught many things by them during the course of the night. They might have taken pity on the writer’s sex writing and wanted to enrich his experience so that he could in future do full justice to the subject of sex in his works.

It was also suggested that singer Sting, who presented Bahal the award, would catch up with him later with “five tantric sex goddesses and a bucket of grease”. Surely such a night could not possibly be topped for a writer in need of improving their written sex scenes, for inspiration alone?

This comment raises an eyebrow at what the sex lives of these writers who win the Bad Sex Award are really like. Bahal comically answers this by saying in his piece:

Some duffers have also started walking up to me these days and asking whether my real life sex was as interesting as my writing. The women I have taken aside and jotted their phone numbers down to give them some detailed answers. The men have had their nuts reconfigured.

Although Bahal happily accepted the award as a “rebellious gesture” for his saucy writing, due to his belief that there is too much censorship of writing in India, he was also a tad peeved, as, “lots of other writers in India thought my book had great sex writing”.

Following on from Suri’s credentials, it seems that critical acclaim of the writer is no guarantee that the sex passages they write will be any good. Among noteworthy winners are John Updike, Hilary Mantel, John Mortimer and Kingsley Amis. And keeping up the Indian tradition, we have none other than Salman Rushdie in Shalimar the Clown (Jonathan Cape)nominated in 2005:

“Let’s, you know, caress each other in five places and kiss in seven ways and make out in nine positions, but let’s not get carried away”.

In reply, Boonyi pulled her phiran and shirt off over her head and stood before him naked except for the little pot of fire hanging low, below her belly, heating further what was already hot. “Don’t you treat me like a child,” she said in a throaty voice that proved she had been unsparing in her drug abuse.

Shalimar the Clown was nominated for the prize, despite winning the 2005 Vodafone Crossword Book Award and being a finalist at the 2005 Whitbread Book Awards.

Keeping Rushdie company in the 2005 shortlist was Tarun Tejpal, currently in jail for sexually harassing a young journalist who worked at his magazine Tehelka. Tejpal was nominated for his novel The Alchemy of Desire (Picador):

We began to climb peaks and fall off them. We did old things in new ways. And new things in old ways. Any body part could be joined to any body part. And it would result in a masterpiece.

A few years earlier, another of India’s Booker Prize winners Arundhati Roy found herself nominated for her highly celebrated work The God of Small Things, for ideas such as ”nut-brown breasts (that wouldn’t support a toothbrush),” along with ”haunches (that could support a whole array of toothbrushes)”. I remember blushing up a storm when I had to read these passages out to my English lit class at uni. Why oh why had I chosen those quotes for my speech?!

Other nominees have included Siddhant Dhanvant Shangvi (2004) for his book The Last Song of Dusk (Weidenfeld & Nicolson); the Pakistani writer Nadeem Aslam (also 2004) for Maps for Lost Lovers (Faber & Faber); Hari Kunzru (2002) for The Impressionist (Hamish Hamilton), and Neel Mukherjee (2010) for A Life Apart (Constable).

Certainly no one can say that writing a sex scene is an easy task, which is why so many authors, Indian or otherwise, shy away from writing one altogether, especially with the threat of winning this award. Indian or otherwise. Writing about sex in a non-crude, non-redundant way is one of the hardest things to do. How much information should the author give? Or not give?

As Sarah Crown in The Guardian writes, “Maybe it’s me, but I find… the concentration on physical sensation, a whole lot sexier than any amount of thrusting, grabbing or grinding”. She also notes that “as someone who works hard to get it right in my own novels, I’m very aware of just how difficult it is to depict well,” and wants to know where the good sex awards are? Perhaps writing from India, a country that is full of contradictions about attitudes towards sex has even more of a challenge.

A survey conducted by Men’s Health in 2013 found that Indian men are the least sexually active among their counterparts. Not only are Indian men having less sex, the education system refuses to even teach children about sex. Nirmalya Dutta on The Health Site asks, “Is our refusal to talk about sex or pretend it doesn’t exist breeding potential predators who never realise that sex is meant to be an enjoyable experience between two consenting adults?” He concludes, “We keep on having to remind people about this but the so-called Indian culture they keep on harping on about isn’t even Indian, it’s the remnant of 19th century Victorian morality and there’s nothing Indian about it”. Is it these attitudes that are resulting in bad sex writing? Or maybe it’s just a happy (ending) coincidence that many of the winners and nominees are Indian writers?

From Roy’s toothbrushes, to Tejpal’s peaks, Rushdie’s awkward teenagers, Bahal’s steady VW’s and Suri’s supernovas, Indian writers sure know how to impress the Bad Sex Award judges. Here’s to the crude, to the badly written, and to the redundant passages that Indian authors have written, we salute you for giving it a red hot go in a tricky field of crumpled bed sheets and underwear on the floor.

Who will win the 2014 title? And which Indian writer will find themselves on the short-list?