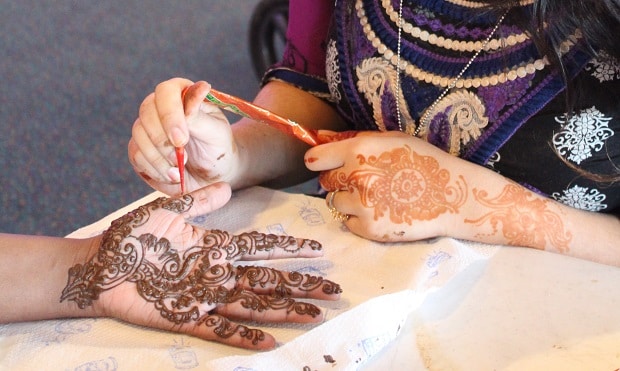 The popular Eid festival draws over 10,000 to its inaugural event under a crescent moon, writes TIM BLIGHT

Melbourne’s inaugural Chand Raat Eid Festival was held on August 10, marking the first southern excursion for the traditionally Sydney-based event. Music and dance performances headlined the spectacle, which also featured food and fashion stalls, henna painting, tarot readings and rides.
Adults and children flocked to the event with attendance numbers of over 10,000. The stage program was opened with a collaborative Sufi-fusion performance by Indian Australian crossover groups Sugam Sangeet Band and Sargam Orchestra. Hundreds had already arrived at the Sandown Racecourse venue before gates opened at 2pm. With the musical program kicking off a little later, most visitors began by taking in the stalls. Several Sydney-based organisations were present displaying their wares including traditional Indian dress and those with a more Muslim flavour, such as hijab and shalwar kameez.
Further music performances continued through the afternoon, comprising the inauguration of the event. Music and dance was interspersed with talks, demonstrations and recitations, including 10-year-old Abdul-Rahman Mohammed of Springvale, who impressed the audience with his beautiful Quran recitation (qirat). Abdul-Rahman’s father, Fazlur-Rahman told Indian Link that his family moved to Melbourne seven years ago from Hyderabad in India. Abdul-Rahman learned his skill through a mixture of lessons from his father, and by teaching himself as he followed online videos of recitations from the subcontinent.
After 15 successful years in Sydney, the rapidly growing Chand Raat Eid festival has reached a major milestone in hosting its Melbourne event. As night fell and the festival’s namesake crescent moon ascended into the night sky, the festival’s director Syed Atiq ul Hassan thanked all involved for their participation and for contributing to the festive tour-de-force. Mr Hassan also thanked the event’s guest of honour, Australia’s Federal Minister for Multicultural Affairs Kate Lundy, and hinted at future expansion plans by hoping that Chand Raat would become a proud national event for all Australians.
With the official welcome concluded, there was not much left to do but party – musical acts returned to the stage beating out the latest Bollywood numbers, as well as more than a few classics and original compositions along the way. Meanwhile, a party was taking place at the other end of the fair where SBS Radio had set up shop with three of the station’s presenters for regional languages. Punjabi presenter Manpreet Singh whipped up the crowd assembled in front of the van, before handing over to Urdu-speaking host Rana Shahid Javed and Pashto-speaking host Abdullah Alikhil, who played hit tunes from Pakistan and Afghanistan. A group of young Pathan and Hazara men danced wildly, drawing a crowd to compete with the main stage.
It was a cold but clear Melbourne night, and as the tandoor sizzled and the chai boiled outside, the stalls inside the racecourse building remained busy. Not far from Indian Link’s stall, Bangladeshi migrants Sarah and Raihan worked their mehndi stall for an ever-growing line. Raihan, who had joined mehndi artist Sarah in Australia less than a month ago, smiled humbly as he explained the stall was an amateur business on which the duo were working. Across the room, the Tarneit-based Indian Exclusive Fashions stall did a roaring trade, while more still had their tarot cards read by Manya Manchandani who operates her business from home. In keeping with the spirit of Eid, Chand Raat is a cultural event which draws strength from the connections of a local community.
Chand Raat, which literally means ‘night of the moon,’ is a celebration of the sighting of the crescent moon. The Islamic calendar is a lunar calendar, and therefore relies on astronomical sightings and calculations to determine the start and end dates of months. The ninth month of Ramadan (or Ramzan, as it is known in many South Asian languages) finished on the evening of August 7, with the sighting of the new crescent moon in Australia. It brought to an end the auspicious period of fasting for Muslims, while the moon was sighted one day later in India and Pakistan.