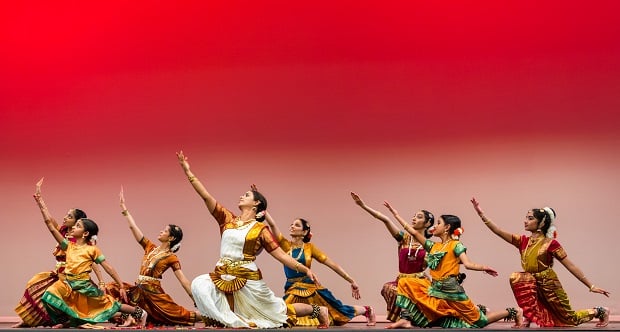 Reading Time: 4 minutesWith its immaculate balance between dance and storytelling, Hamsa Venkat’s ‘Noopur’ made for a great show

While Shiva performed the aananda taandavam, a bell from his foot fell to the earth. Lest it shatter the universe with its intense force, Nataraj (another name for Lord Shiva) playfully balanced it on his head, shoulders, knees and toes, as it descended gently down to earth, thus creating the four primal sounds – thaa, dhi, thom, nam.

This divine bequest went on to adorn the feet of mortals, inspiring a revered art form. Bharatnatyam (an acronym for bhaavam, raagam and thaalam), a classical Indian dance form as we know it today, was born.

The salangai or dancing bells of Sydney’s Samskriti School of Dance collectively tinkled at UNSW’s Science Theatre recently to tell this ancient tale – the divine story of dance. It was a tale replete with action, drama and pathos.

Initially known as sadir or daasi aattam, its long and eventful history, as it evolved through the ages, was sumptuously narrated in Noopur -The story of a dancing bell, from the sanctum to the stage.

Conceived and choreographed by Hamsa Venkat, the production raised funds for Unnati, a Bangalore-based vocational training and social reformation initiative. Unnati has been adopted by Rashee, a not-for-profit organisation dedicated to helping under-privileged people, particularly in thecore areas of health and education.

Effective storytelling, with a strong emphasis on aesthetics, has always been the highlight of Samskriti’s repertoire, reaching out to the audience with meaningful tales that are deeply entrenched in traditional values.

From the props, costumes and make up to acoustics and lighting, a lot of thought and planning goes into every production.

An innovative addition this year was the use of detailed 3D sketches by Vikram Kumaran as a dominant backdrop.

Set in six acts, from the divine beginnings to contemporary era, Noopur cleverly integrated powerful narrative threads within the core framework of dance.

The opening scene was a feast for the eyes as Govind Pillai re-enacted the Aananda Thaandavam, from whence the story begins.

Little Vishaka, as the innocent Devadasi being initiated into this divine art form, certainly proved her mettle. From the inner sanctum of temples to the courts of powerful kings, dance took on new form and meaning, incorporating for the first time elements of entertainment, paving the way for nritta.

Noopur paid homage to the lasting contribution of Tanjore Quartet (jathiswaram). The tale of raaj narthakis (courtesans) was elaborately told through the story of Madhavi from the famed opus, Silappadhikaaram, traversing through the Chera, Chola and Pandya kingdoms. Each frame was beautifully constructed, finally reaching the court of Swati Thirunal (padam).

Muthiah Bhagavathar’s Mathe Malayadhwaja formed the centerpiece of the production (varnam). Portraying the many incarnations, facets and moods of Devi as Sati or Dakshayani (self sacrifice), Parvati (creative) and Meenakshi (warrior), varnam offered Hamsa’s experienced students the perfect platform to showcase their mastery and prowess.

The story of Dakshayaniwas most creatively told; likewise the birth of Parvati’s adorable child, Aarumugan, from the lotus petalsslowing down for the tale of Shankara, eventually culminating in the energetic finale amidst chanting of primal sounds as the kundalini rises leading to self-awareness and spiritual enlightenment.

The second half of the evening carried the narrative forward to the modern era. The onset of the colonial era marked the decline in patronage for performing arts, forcing dancers to seek support of the zamindars. The playful padam was dedicated to truant Krishna.

After decades of neglect, negativism and taboo, forward thinking visionaries like Rukmini Devi Arundale (who went on to found the iconic Kalakshetra) resurrected Bharatnatyam.

Firmly rooted in tradition, yet breaking barriers through experimentation, it became an aesthetic art form once more, finally ascending the stage. The two pieces that followed – Nattanam Aadinar (keerthanam) and the popular folk dance Suppada were Hamsa’s tribute to her alma mater.

Paarkadal Allaimele is a wondrous tribute to its divine origins. The good-natured, but often bitter undercutting, rivalry among the actresses provided room for light-hearted entertainment.

What followed was a fusion piece choreographed by the talented Govind Pillai, intertwining the old values as laid down in Natya Shastra with the joyous strains of poet laureate Tagore, heralding an era of change and innovation.

Many millennia were traversed through the course of an evening; many tales left etched in our memory, striking fresh ideas in fertile imaginations everywhere. Noopur was a lesson in history, tradition and culture, beautifully delivered.

Where there is a beginning, there is an end, with the firm knowledge that more will follow.