Am I: Sydney Festival 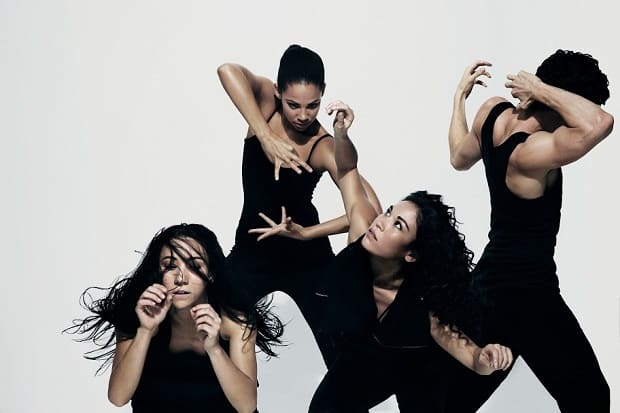 Reading Time: 4 minutesDance and music collide in a visceral and physical exploration of what it means to be a part of the global tribe


Am I, a contemporary dance and music collaboration between choreographer and director Shaun Parker and composer Nick Wales will be performed as a world premiere for Sydney Festival at the Sydney Opera House. Exploring the quintessential meaning of “I”, Am I asks the audience “Am I my tribe? Am I my genetic blueprint? Am I a random cosmological sequence?”
“Set sometime in the near future, [Am I explores] seven individuals [who] seek to re-establish a new civilisation, observing the frailties and mishaps of those that have gone before them,” reads the Sydney Festival website. “Religion meets science in this new world order as society fluctuates between conflict and harmony”.
Through Am I, Parker “Wants to push the choreographic language to the next level in the sense that it’s visceral, it’s physical, it’s highly articulate, and it’s complex in a way that we are as humans,” he told Indian Link. This self-devised piece integrates live music, voice and dance with ancient fan and stick weaponry as it explores culture and anthropology. “It’s a very contemporary dance language, it’s now,” said Parker, and it uses “a lot of locking and popping movement”.
Due to the improvised nature of the piece, each of the 14 extraordinary dancers, musicians and singers were able to add their own touch to Am I, including international guest artist Shantala Shivalingappa, a Kuchipudi dancer. Born in India, and brought up in France, Shivalingappa’s gestural work can be seen incorporated in Am I, as well as a piece which she sings in Sanskrit. Indian dance, as well as movement inspired by other cultures, can be seen in the piece, as it explores the idea of ‘international tribes’. Shivalingappa, Parker and dramaturge Veronica Neave visited India to research dance in January 2013.
“One of the challenges of working with a group of not just dancers, but also musicians and singers was in the detail,” Parker explained to Indian Link. While allowing improvisation and free form, the challenge of working like this is in remembering what has just been created. By “recording the work with video” and endlessly going back over material, the original magic of the improvisation is kept, as well as the successful moments of the piece. Recording the work stops it from just being one “endless jam” session, explained Parker.
Because Wales and Parker have produced five collaborative performances together in the past (their first being in 2007), the dance and music works seamlessly. The live soundscape creates an immediate response in the dancers’ bodies. Wales explains that the music is a hybrid fusion of devotional cult-like singing and ethnic woodwind, percussion and string instrumentations.
As Am I developed, Parker contacted Dr Helen Johnston, Senior Lecturer, School of Physics at the University of Sydney, to gain insights into DNA, physics and movement. To explore the ideology, Parker used Johnston’s expertise to look at the individual as a result of cultural conditioning that defines us and who we are, and the idea that the genetic information of ‘tribes’ is passed through behaviour and the subconsciousness of humans. Am I can then become a “gateway to larger learning,” said Dr Johnston.
Because the body expresses a thousand words, it can crystalise notions of physics through its movement. But it wasn’t just the world of science that Parker wished to explore, as he is just as interested in the notion of spirituality.
Am I is 75 minutes in length (with no interval) and is “highly physical, bombastic, delicate, articulate, with a huge amount of detail in a small amount of time,” said Parker. It expresses information going through cells, just like the internet.
Of the stick weaponry scenes, Parker explains that they came about because of cello player Julian Wong’s background in martial arts, who, after some improvisation with Parker, became a dancer in the piece. The wooden sticks were however, changed into metal sticks because of the connotations that metal has with technology. “As society progresses, metal is developed, which changes society,” said Parker. “Here the metal sticks symbolise the turning point, scientifically and spiritually. They become an absolute symbol of man’s learning, a symbol of many things,” he added.
Am I embodies the fusion of science and artistic form which compels Parker, from the creation of the universe, to the formation of consciousness, spirituality and society. “The beginning of the show starts with a pulse of life, the Big Bang Theory, the creation and expansion of the universe catapulting through time,” said Parker.
“Using bodies to express” energy and motion, Am I features Josh Mu, Sophia Ndaba, Jessie Oshodi, Marnie Palomares, Melanie Palomares, Shantala Shivalingappa, Julian Wong, Tunji Beier, Alyx Dennison, Jess Green, Jason Noble, Jessica O’Donoghue and Bree Van Reyk.
Parker wants the audience to walk out of the performance wondering what it means to be human, and Wales wants them wondering if the music was from “the future or the past?” Am I is after all, a perpetual question, as well as a tantalising statement.

Donate towards the recording of a CD for Am I