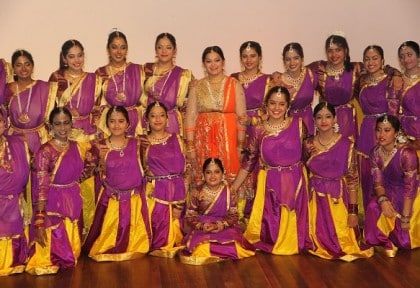 With great dexterity the dancer spun around and her traditional anarkali kameez swirled around her in unison. The rhythmic tempo increased in tandem with the bells on her feet. The whirling pirouettes continued as the speed increased in an amazing combination of balance and precision.
After the 30th spin the audience joined in, counting, clapping and encouraging the young dancer. As she completed her 100th spin the audience broke into thunderous applause.

Aadya Mishra, 15, who accomplished the challenging chakkars, was among the many students performing at the 5th annual concert of the Ghungroo School of Kathak Dance in Melbourne.
The invitation-only concert drew a packed audience at the Koonung Secondary College recently. The Natabar Nachat theme was presented to the songs of Rabindranath Tagore in Brajabuli, written by the great poet under the pseudonym Bhanusimha or Bhanu Singho Thakur.
“What set us apart from other Kathak concerts in Melbourne was that our dances were accompanied by live music played by Sabyasachi Bhattacharya on sarod and Jay Dabgar on table,” informed Sumona Bhattacharya from Ghungroo School.

The mother of two established the school in 2008 to promote the Kathak classical dance form in Melbourne. Sumona learnt Kathak from the renowned Padmashree and Sangeet Kala Academy winner Rani Karnaa. She continued her learning under the tutelage of Anuradha Dua.
Sumona’s style of teaching combines the techniques from both Jaipur and Lucknow gharanas.
“I believe in the purity of classical styles and my attempt is to pass on the energy, passion and discipline related to this amazing dance form in a relaxed and fun learning environment,” Sumona said.

Ghungrooo School’s recent concert was well- received, with positive feedback from students, parents and audience alike. Saurabh Mishra, who was also the MC, said he was pleasantly surprised to see his daughter Aadya accomplish the 100 chakkars on stage. The students, this year, displayed amazing talent and finesse according to him.
“Natabar Nachat sequences depict the story of Radha and the Gopis searching for Krishna and eventually finding him. The allegory represented here is the spiritual search for the divine,” said Saurabh.
He informed the audience of the historical revival of Kathak and the contributions made by Wajid Ali Shah, the last Nawab of Awadh. Under Ali Shah’s patronage, the art form developed to become preeminent in Lucknow. When he lost power, he spent his years in exile, in Kolkata, recreating the artistic environment of Lucknow. He was much maligned for being a debauched and detached ruler, however, he was widely credited for the revival of Kathak as a major form of classical Indian dance.

“It is mainly due to him that Kathak came to Bengal, and today we are enjoying the fusion of kathak to Bengali songs in this concert,” said Saurabh.
Sankar and Mita Bhattacharya, who were in the audience, felt it was one of the best evenings they have had in the recent past.
“I have very limited understanding of the various dance forms, but even to us, it was good to see the progression of the students, having seen their performance last year,” Sankar said. “We appreciate the way Sumona is nurturing the students and training them in the beautiful art of Kathak. I am sure her Guru will be very impressed with this effort.”
Photo credit: Neelam and Sudhir Chaurasia