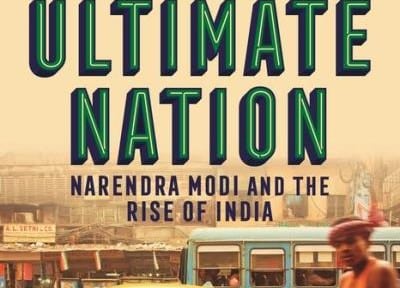 Adam Roberts’s new book Superfast Primetime Ultimate Nation: The Relentless Invention of India [published by Profile Books, April 2017] is a tour de force on modern India: its history, society, economy and foreign relations.
Roberts draws on on-the-ground research, which came from five years spent in India, and he interviews a wide spectrum of people – from wayside fortune-tellers to Modi himself. Based on this, he answers the question if India is ready to play a dominant role on the world stage.

Part history, part travelogue, Roberts’s book offers a wealth of facts, insights and firsthand accounts of colourful characters of a country he so obviously loves.
Roberts makes an intriguing but not altogether persuasive case that India, expected to surpass China as the world’s most populous nation in 2022, could become a powerhouse in the next few decades. For him, India is a country fizzing with entrepreneurship and is a world power in waiting.
It, however, depends on Modi, and Indian policymakers getting a whole lot of things right. Roberts identifies four big challenges, of which three are internal: accelerating economic growth; cleaning up politics and improving governance; and maintaining social peace in a diverse, multi-faith society.
On the whole, Roberts sees India’s growth as ‘scattershot’: There is no comparison to China which is already at least 50 years ahead, and India’s need for political will is crying out.  He paints a conflicted portrait of a country still sorting through the contradictions of a rapid and messy transformation.  Roberts’s argument adds up to a swathe of what-ifs: He qualifies every positive assessment he makes about India, with caveats. He thinks that India’s democratic government, headed since 2014 by Prime Minister Narendra Modi, is “potentially a huge advantage,” and devotes a whole section of the book to Modi and his leadership. In the same breath, he laments the country’s legal system is “sputtering, often overwhelmed and sometimes corrupt” and that its political system is controlled by powerful dynasties.
He points out that while India has a youthful population, only 30 million Indians work in the formal sector; an appalling 130 million Indians do not have a toilet; and almost a third of Indians are malnourished.  The list goes on.
So what next for this Asian juggernaut that has not quite delivered?  Roberts suggests that the answers can be found in successful and well-governed states like Gujarat, which have, by cleaning up corruption and improving governance, shown the way forward. Taking Surat as an example, he points out how a committed and clean leadership brought remarkable changes to the city.


The fourth variable, according to Roberts, is India’s ability to manage its relations with Pakistan, China and the US. Internationally, Modi’s interactions with his Pakistani counterpart, Nawaz Sharif, and China’s Xi Jinping have done little to improve relations, while China has made economic and political inroads into countries such as Sri Lanka and Nepal, which India considers to be part of its natural sphere of influence. Yet India’s ties with the US have deepened, aided by the influential Indian diaspora. Roberts predicts that “India will also, gradually, begin to match greater diplomatic (and military) prowess to its rising economic clout.”
The weakness at the book’s core is the seeming unlikeliness that Roberts’s high expectations that India will become a dominant power in the world stage, will be realized.  Robert himself highlights the enormous challenges that face India: its diversity is both a strength and a drag, and bad governance and corruption are holding back its development. Ultimately, Roberts’s is a cautiously optimistic vision for the country he loves a great deal.
Here, I am reminded of Rana Dasgupta’s perceptive book on Delhi – which is applicable to India at large: that neither the city nor the country is going to become a first world nation any time soon.  I hope he is wrong and Roberts is right.
Nevertheless, whether one agrees or disagrees with Roberts’s hyperbolic assessment of India as the ‘world’s greatest nation’, his deep, incisive exploration of India’s past, present, and possible future is engaging; the book is essential reading for anyone who wants to know about the new India.
Adam Roberts served as South Asia Bureau Chief of The Economist for five years, and is now its European Finance and Business correspondent. He has written several books, including the much acclaimed The Wonga Coup.
- Advertisement -
Share
WhatsApp
Facebook
Twitter
Linkedin
Previous articleThe Power of Now
Next articleScintillating Srikanth smashes it in Sydney