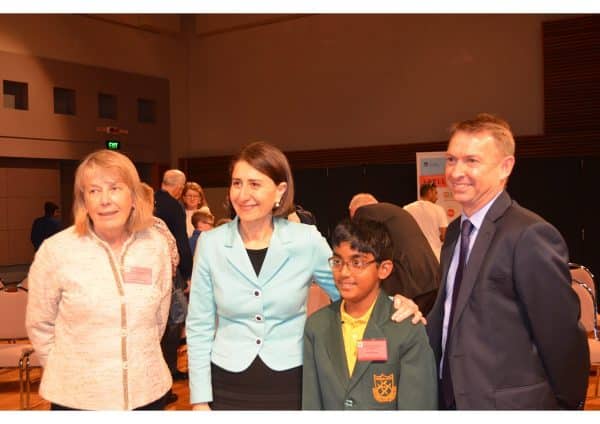 Akshath, a Year 4 student at Homebush West Primary, was one of 3,700 students competing in 89 finals.

A total of 950 schools registered to participate in the 2017 Spelling Bee, with an astounding 154,000 students involved in the competition. Multiple elimination rounds at school and regional levels culminated in the State Finals held in front of a live audience at Eugene Goossens Hall at ABC Centre in Ultimo on 8 November 2017.

Spelling seems to be in the Senthil genes. An insatiable thirst for reading and a burning desire to emulate his brother Adirath (who was also a state finalist in 2014) ensured that Akshath was not only well geared up for the competition but also thirsting for the top gong.

In the end, he was tripped by the word gondolier. Calm and collected through the entire process, Akshath and Lena Zhu survived multiple elimination rounds as ABC TV and Radio newsreader Juanita Philips carefully enunciated each word. 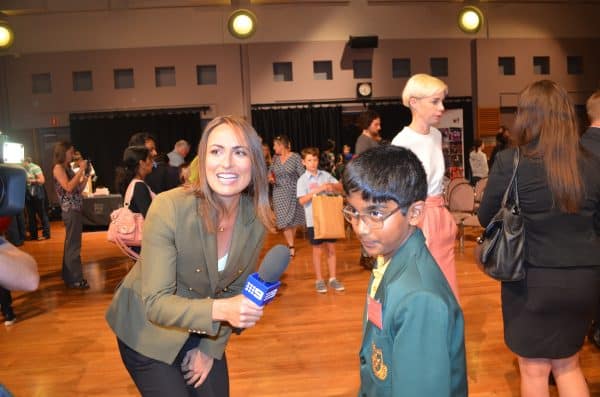 The Premier’s Spelling Bee was first introduced in 2004 as a fun and educational way for primary school students to engage in spelling. The program includes activities to encourage all students to engage with spelling and to promote improved literacy in combination with the English K-6 syllabus. There are two categories – junior and senior. Junior spellers had to correctly spell words such as bitmap, acoustics and flannelette to compete in the state finals, while senior students were challenged with words such as pendulous, delicatessen and antiquity.

“Premier’s Spelling Bee is one of my most favourite competitions because you can learn new words, make new friends and, of course, improve your ability to spell in the future,” Akshath told Indian Link.

“It felt amazing to come this far to the State Bee. It all started back when our teacher held a written test to see who would get selected for the class Spelling Bee,” he explained. “I was one of the ten people because I got 20 out of 20. A few weeks later, we had the class Spelling Bee. I won that and then I went on to Regionals.”

His winning word at the Regionals was scenario. “I was very excited when I got that correct,” Akshath stated.

Nervous and confident in equal measure, Akshath prepared for the big day by systematically learning new words from the Macquarie English Dictionary that he won at the Regionals.

“At times, it was very annoying to study the words again and again but as I got used to it, it became fun. When my brother was preparing for his State Finals in 2014, I used to ask him the words and that’s how I got interested in it,” he explained.

Some of the words he had to contend with were wheel, inquisitor, fraternal, bicentenary, commodious, thermodynamics, paltry, non-descript, convivial and paparazzi.

The hardest word he got, Akshath said, was beleaguered. “Lots of rounds went by, more people got eliminated and the words got tougher. Finally, in the eleventh round, it was just me and another girl, she spelled ‘irrevocable’ correctly so I had to get this word correct to stay in the competition. So I prayed that I would get a word I know. I got ‘gondolier.’ I thought I knew that word but I spelt it G-O-N-D-E-L-I-E-R instead of G-O-N-D-O-L-I-E-R,” he added.

Clearly disappointed, Akshath has promised Premier Gladys Berejiklian that he will be back next year.

When not grappling with words, Akshath can be found at Airey Park in Homebush playing with friends. He enjoys a number of team sports, particularly table tennis, soccer, cricket and basketball.

“I want to excel in table tennis, maybe get into a club and start playing competitions often. My long term goal is to get into the Olympics and represent Australia in table tennis,” the talented youngster said.

His favourite subjects at school are Maths, Arts and Sports.

Akshath started enjoying books even before he started walking, recounted proud mum Ponnu. Like every devoted Indian mother, she is clearly the driving force behind her boys’ success, encouraging a genuine love of all learning. “He was 8 weeks pre-mature and did not walk until he was 3. He loves to borrow books from the library and often finishes 10 books at a stretch with a packet of chips,” she noted.

Thanking parents and teachers for kindling this interest in literacy, Berejiklian said, “Spelling is the cornerstone of literacy and the spelling bee is invaluable in promoting development of skills, necessary for clear communication. It encourages students to embrace love of spelling and, in turn, love of reading, which stays with them for the rest of their life.”

In the meantime, for Akshath, the countdown to the next bee has already begun, this time in the senior category.