Student from rural India is flown to Sydney in an attempt to score a goal for Canterbury Bulldogs, writes RITAM MITRA 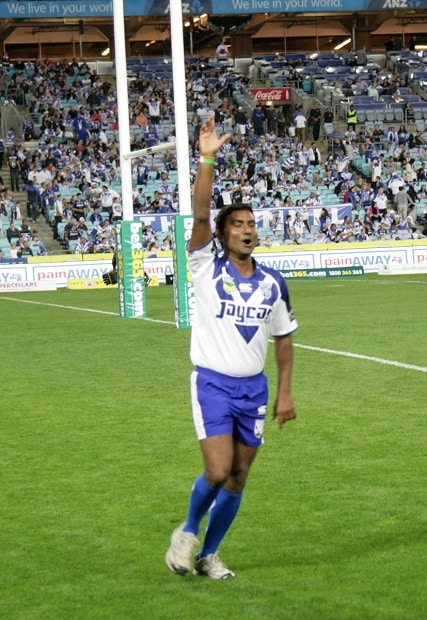 Shivanand Swami, a 29-year-old business networking student from rural India, was not who most spectators expected to see attempting to kick a goal during the last home game of the season for the Canterbury Bulldogs. But it was Swami who lined up for a shot at goal during half-time, attempting to win $1 million as his prize for winning a trading competition run by one of Canterbury’s corporate partners, Easy Forex. Although he missed out on the grand prize, Swami walked away with $20,000 and was certainly one of the highlights for the thousands of rugby league fans who were cheering him on at ANZ Stadium in Sydney.

Swami hails from the Parbhani district in the Indian state of Maharashtra, where he lives with his parents, two brothers, two sisters and their families. Although he makes a living distributing Luminous-branded batteries while studying business networking, he has always had an interest in the foreign exchange and commodity markets. Swami won the competition by making forex trades based on daily market trends. By using guaranteed profit rates, he ensured that 100% of his trades were profitable. He beat thousands of other traders from around the world, including runners up from China and Australia.

Having lived in Parbhani his whole life, winning a luxury trip for two to Sydney was the first of many firsts for Swami when he heard that he won the competition. To begin with, although he would be kicking a rugby ball for the chance to win $1 million, there was a slight problem; he had never heard of rugby league before, let alone kicked a rugby ball. “When I found out that I won the competition, I was excited and was practicing and learning the game, and felt proud that I was visiting Australia for the first time”. In addition, Swami is the first person in his family to ever visit Australia. 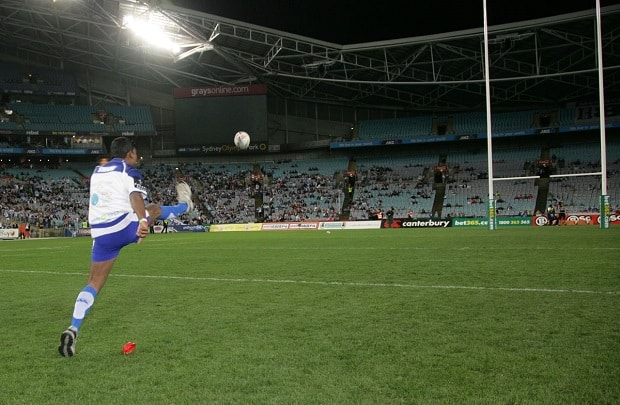 However, it was almost over before it began, Swami’s visa was cleared just five hours before his flight was due to depart. To help prepare him for the kick, competition organisers Easy Forex arranged for Swami to have a special session with none other than rugby league legend, Hazem El Masri, who is 300 points clear of Andrew Johns as the leading point scorer in NRL history.

There was, however, a catch; El Masri was not allowed to teach Swami to kick, but only demonstrate by kicking a few goals himself.

“It was interesting,” said El Masri. “I had to try and teach him something without actually telling him about it. I wish him the best of luck”. Asked for his assessment of Swami’s performance leading into the big kick, El Masri had a simple piece of advice. “Get angry! I needed him to get angry, but he’s just too nice”.

On the night, Swami was decked out in official Bulldogs gear, and looked every bit the professional player. “I was obviously nervous when I went for the kick,” he said. “I am disappointed I missed the chance to be a millionaire, but I very much enjoyed the Australian tour. I like Australia very much and the Australian people are very good and cooperative people”.

Unfortunately, as it turned out, Swami’s kicking game let him down and he missed out on the grand prize, but the experience has opened up a world of opportunity for the passionate trader. With his $20,000 in prize money, he plans to open a food processing unit in India and start a forex trading institute in order to teach beginners and advanced traders the best way to trade foreign currencies. The Chief Executive of the Bulldogs, Raelene Castle, was delighted that Swami still received a $20,000 prize. “It was a great spectacle to see Swami out there on the field at half-time, said Castle. “It was great to hear the crowd get behind him”.

Swami himself was still elated with the experience. “I’m so happy I have won this money! I am very grateful to Easy Forex for giving me the opportunity to come to Australia for the first time and see the game of rugby league. This prize will help my family back home in India.”

Although he plans on helping others with the money and his impressive knowledge of the trading markets, there are exciting new things on the horizon for Swami himself. “I am looking to move overseas rather than live in India and I would like to pursue a career in forex and stock market trading”.

Swami does, however, have a score to settle with the rugby ball after missing out on the grand prize. “Mostly [rugby league] is not played in India, but I like the game and I will practice when I am home so I can play this game much better”. 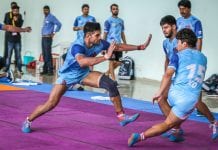 The spiritual side of Leander Paes