Home Arts A plea from Holi

An aura of distaste and contamination has enveloped the beauty and innocence of the festival of colour, written by RANI JHALA 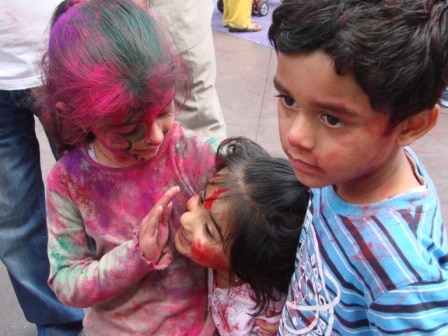 I am Holi, the festival of colour. For centuries, I have welcomed the season of spring with my gaiety and hues. I fostered communal harmony as the nation came together to celebrate. I was a favourite with children and I was beloved of the adults. A festival on which for one day, all was forgiven as people celebrated with coloured powder and water.

Many myths surround my origin. But that I endure to this day proves that I am a festival that is endearing to man and one which truly changes the dark and cold days of winter into the bright and warm moments of spring.

Whatever my beginnings, I continue to serve society at various levels. Children can frolic without being scolded for playing in the water or soiling their clothes with colour. Adults have the liberty to let their hair down and for this one day, be free to relive their childhood.

And this is the only day that society gives every man and woman the liberty to forget social norms and mingle as equals.

The fact that I have survived thousands of years validates my need and existence. Just like Diwali, I am one of those festivals that unites communities, rather than dividing them.

Today, thousands of years after man created me, they are leading me to my destruction. Why? Because commercialism has reared its ugly head and is polluting my purity. Modernisation is contaminating my sanctity.

Nature gave bountiful resources to make me a safe and enjoyable event, filled with playfulness and innocence. She offered wonderful colours that were made from plants and the landscape. She gave me water from the plentiful resources of rivers, lakes and dams.  And she found natural water guns made from bamboo called pichkari so that all these components could be used for fun.

Everything came from nature and was returned to nature. The elements were lent to man for his merriment and taken back, without harming man or his surroundings.

Then man decided to provide his own components and the natural products were replaced with cheaper synthetic items. The bamboo pichkari has been left behind for the plastic ones that end up polluting the grounds as they are carelessly discarded after use. Plastic balloons that serve as water bombs burst on impact and scatter over the ground waiting to be picked up by an unsuspecting bird or animal, often killing them.

The water that served to irrigate the land as it ran off the human body now falls on concrete and bitumen and is wasted away into the drains.

Gulal, the dyes from plants like hibiscus and henna are now left untouched as people buy cheaper synthetic colours or chemically produced industrial dyes. The black powders have been found to have lead oxide and green shades have copper sulphate. The former is known to cause renal failure and the latter, eye allergies and even temporary blindness.

After every annual visit of mine, more and more people are succumbing to the toxic effects of these synthetic colours.  Asthma, dermatitis and long-term decolourisation of skin are common complaints. Eye clinics work overtime in their attempt to save people’s sight. Participants unable to swim have been known to drown as they are thrown unprotected into tubs, rivers and lakes.  When it is the children who suffer these mishaps, it becomes a higher price to incur. One that I no longer wish to pay!

Associations are sprouting to spread my call for a clean and safe festival. Listen to them. There is a reason for their anger, and valid reason to clean things up. Go back to the old days and make the coloured powders at home from plants such as the henna, sandalwood and saffron. Try hibiscus flowers and the fruit of the sinduria plant. Enjoy the colours of the flame of the forest tree and the gulmohur – and marigolds, chrysanthemums, roses and the jacaranda! Use vegetable dyes from tomatoes, carrots and beetroot.

Buy natural products from safe outlets. Check that the family is not allergic to them before using them. Be responsible before being merry. I will come back every year, but don’t let me revisit destruction.

‘Cleaning up’ should not just refer to scrubbing off the colour, but also in the way you celebrate. Eve teasing and sexual harassment should not be excused on this day. Flirting and touching should not be endured especially if the recipient is uncomfortable. Adulterers should not be allowed to use my name as a licence to succumb. The slogan, Bura na mano, aaj Holi hai should be used sensibly. Don’t use my name to excuse bad behaviour. That is not what I am about.

Nor am I about the onslaught of physical abuse that is tolerated at differing degrees. Balls made of clay and saucers filled with coloured powder are smashed on innocent passer-bys; rolled cloth is whacked on a person’s back, often ripping the clothes and scarring their backs; water is thrown at an angle so as to slice the skin. Surprisingly, women too seem to find an unusual pleasure in meting out these punishments to men. What happened to the shower of colour, the melody of songs, the gaiety of dances and the partaking of innocent fun?

Today, people dread having to leave home on the day I arrive. Residents lock up their belongings and shut their windows for fear of the mess they will have to otherwise clean up. Women and children fear being touched the moment they have to step out. Visitors enjoy my festival from the safety of their hotel rooms instead of partaking of the festivities below.

I am yours. I will return every year. Don’t let me dread my own arrival.