Home Front Page News A champion of Indo-Oz ties, and a patron of the arts

A tribute to Dr Behera, Consul-General of India (Melb) 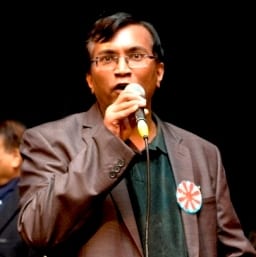 The Consul General of India in Melbourne Dr Subhakanta Behera’s sudden and untimely demise shocked not just the Indian community, but also those in the mainstream who had connections with India. Dr Behera was respected for his dedication to his role and involvement with the community despite his relatively short tenure in Melbourne. Several prominent individuals spoke to Indian Link, sharing their memories of this exemplary individual.

(Minister for Multicultural Affairs and Citizenship)

I join with the Premier and the Leader of the Opposition to express my sincere sorrow at the death of Dr Subhakanta Behera. Dr Behera was a passionate career diplomat; he was a talented writer and a creative poet; he was a committed family man and a real gentleman who earned the respect and admiration of all those he met.

Dr Behera took on the post of Consul General of India in Melbourne in May 2011 at a time when the Indian community in Melbourne was facing many challenges. Upon his arrival Dr Behera wasted no time. He constituted a committee on student-related activities to assist newly arrived international students to deal with their initial transition.

He also announced a Victoria-India doctoral fellowship program to offer scholarships to Indian students to undertake their PhD studies. During my first meeting with Dr Behera he told me he needed to achieve three things during his term of office in Melbourne: to promote and encourage more cultural exchanges between Victoria and India; to increase trade and business opportunities; and to unite the community. He said, ‘My greatest challenge is to bring the community together’. He was aware that the number of Victorians of Indian heritage had doubled between 2006 and 2010 and the number of organisations had tripled. He said the challenge for him and the community was how to get them working together as one to ensure a brighter future for its children.

Dr Behera saw his role as more than just a consul general for Victorians of Indian heritage, as he believed the Indian community as a whole had links and was already connected to India. He wanted to reach out and connect with mainstream Victorians. He wanted to engage the wider Victorian community in an on-going cross-cultural exchange and dialogue. Dr Behera had a very simple message: to try to encourage as many Victorians as possible to visit India and to experience, see and taste what India has to offer. He said to me that if people could not go to India, then he would try to bring India to Victoria.

His passing is a painful loss for his family, for the Indian government, for Victoria’s Indian community and indeed for the wider community. I extend my condolences to Dr Behera’s family – his wife, Rajashree, his son Ananya, and daughter Amruta.

As the Vice Consul I worked closely with Dr. Behera since his appointment to Melbourne. He was a wonderful human being, easy to get along with and very approachable. He was very active within the community, with a great interest in culture and in promoting trade between India and Victoria. During his time the Australian Government sent the largest trade delegation to India.

Dr. Behera was always forthcoming with lots of new ideas. He wanted to do a lot of things within the community. The consulate generally has limited resources; yet he encouraged all those who worked with him to perform at their best.

He was down to earth, positive and family oriented – a caring and considerate parent.

His sudden passing away has resulted in a loss to the consulate and the community.

In the passing away of Dr Subhakanta Behera, the Consul General of India in Melbourne, India has lost a great diplomat, the Academy a true scholar, the world of culture a generous patron, Victoria’s Indian community a towering leader, the Australia India Institute a fierce supporter, and I, a close friend.

I have known Subhakanta for more than 25 years, from the days when he left Ravenshaw College in Orissa to join JNU in New Delhi. His simplicity was matched by his extraordinary scholarship and talent and his friendship was one of extraordinary loyalty and commitment. The Indian Civil Service exam is one of the most difficult in the world and the Indian Foreign Service recruits less than 30 officers every year out of up to 80,000 applicants. It was a tribute to Subhakanta’s scholarship that he was one of them, and served subsequently with distinction in Moscow, London, Washington, and as head of policy planning in New Delhi, before taking up his position as Consul General of India in Melbourne a year and half ago.

During these years in the Indian Foreign Service, Subhakanta did not give up his scholarly pursuits, a D.Phil. from Oxford, books, short stories, poems in English and Oriya and a collection recently translated into Hindi and another historical novel in press.

In the last year and half, Subhakanta provided leadership to the Consulate General’s office and to the Indian community more generally. Indeed, Subhakanta and Mrs. Rajashree Behera almost single handedly rejuvenated the Indian cultural scene in Victoria. Through this tribute we must also celebrate the life of a Renaissance person.

President of Federation Of Indian Association Of Victoria (FIAV)

When I first met Dr Behera, I was surprised that someone who had just arrived from India was already well versed with the issues that were plaguing the Victorian Indian Community. Through regular weekly meeting and briefs, Dr Behera, from the outset, was very willing to be involved in every aspect of the Indian community in Victoria. He was a patron of the arts, attending many concerts and working strongly alongside the FIAV to bring the Indian Music and Dance Festival into fruition.

Dr Behera had a way of bringing together individuals in the community to work towards a common goal. He always took a personal interest in community events and aided with many fundraising ventures. Dr Behera, in his position as Consul General, always gave back to the community, supporting many individuals and organisations in their attempts to help their community.

Dr Behera’s diplomatic and amicable nature and his vast knowledge made him a popular dinner companion amongst the community. After only a few very short hours with his wife and two children, it was very hard not to delve into a friendship with the Behera family. His devotion to his family was very inspirational.

We will find it very hard to forget Dr Behera and he will always hold a special place in our and FIAV’s memory.

I met with Dr Shubhakanta Behera two days before his untimely demise. We discussed a social issue that affects the community and he was very understanding and supportive. That is how I remember him: as a person who was dedicated and committed to his community and his family. He was greatly involved in the promotion of arts and culture. I remember when I first met him at a private dinner he recited his poetry with great passion for all the guests. His wife Rajashree always supported him in all their public appearances, both conducting themselves with charm and grace. I offer my deepest condolences to the family. The Indian community in Melbourne will always remember Dr. Behera as a diplomat and a gentleman.

When Dr. Behera was deputed to Melbourne there were bound to be comparisons with the previous Consul General Miss Anita Nayar who had made some efforts to bring the community together. Dr. Behera proved very quickly that he was not your typical bureaucrat; he was very social and well connected with people. He would attend every possible event big or small and he became familiar with the community very quickly. Many people were genuinely emotionally attached to him as an admirable person. He was a family man and he took his family with him everywhere. He was down to earth and he tried to understand the pulse of the entire community and hear their voice. His passing away so early in life is very sad news.

I met Dr. Behera and his family at a semi formal event and we hit it off very well. Our wives Madhu and Rajashree became very good friends. There were several catalysts instrumental in our friendship. We had similar personalities, interests and outlook on politics. We both took much interest in community affairs. I think we complemented each other very well.

As a person he was very approachable, humble and easy to get along with. He would always give you time and he went beyond what one would expect a diplomat to do. He actively took part in community activities, whether it was a cricket game or a formal awards ceremony. He attended every AIBC event whether big or small.

He had a role to play as a diplomat, however he was fulfilling a higher goal that he had set for himself through his untiring involvement within the community. Madhu and I were very fortunate to have enjoyed the Beheras’ friendship. His untimely demise shows us how fragile life can be. We now need to ensure that at this difficult time his family gets every possible support from us.