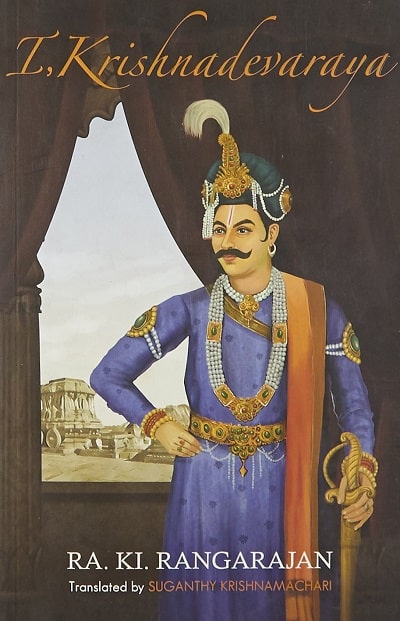 Robert Graves’ autobiographical novel I, Claudius – ostensibly told by the eponymous Roman Emperor spanning a period from 41 BC to 44 AD – has been acclaimed as one of the 100 best novels ever written in English.  Impressed by the book’s scope and depth, Tamil writer RK Rangarajan set out to write a similar novel in Tamil about the famous and towering historical personality, the Emperor Krishnadevaraya (KDR) and called it Naan, Krishnadevaraya.  The English version, translated by Shantha Krishnamachari, I Krishnadevaraya has been recently published, and is not a bad rendering of the original, although its language lacks the flourish and the finesse of the original.

For those history buffs – particularly Vijayanagar-spotters like myself – it is not a book one could resist, especially when the elegant cover of KDR stares at you from the window display of a bookshop.

The Vijayanagar empire has fascinated me from as far back as I can remember, and I have devoured every book or article on it that I could lay my hands on over the years.  It culminated in a visit to Hampi – the magnificent but ethereal ruins of this once-great empire, reduced to rubble by the Deccan Sultanates after they defeated the Vijayanagar army in the battle of Talikota.  During their six-month occupation, they sacked and systematically destroyed this once-proud and thriving cosmopolitan city, extolled by Italian and French travellers, and prominently identified in the European maps of the Middle Ages.

I digress. If you, however, expect to read an account of the glorious reign of KDR, his conquests, his temple-building, its scientific achievements, its marvellous architecture and sculptures – you will be disappointed. The book does not cater to those looking for a catalogue of Vijayanagar achievements from the great emperor’s mouth. Instead, its focus is almost exclusively on KDR’s pursuit of a beautiful dancer named Chinna Devi, with whom he becomes obsessed, and who becomes his second principal wife after he pursues and wins her over – spanning a few years.

It does, nevertheless, capture the zeitgeist of the era, the social and religious mores, KDR’s contemporaries, et al as Rangarajan has done his research fairly thoroughly. He has brought to life several of the people in KDR’s coterie, and they have an authentic ring to them. KDR’s mother, his long-suffering first wife Tirumala Devi, his able and loyal general Appaji, the head of the Vaishnava Mutt Thathayya, the bold and talented Gayatri etc, are memorable characters who leave their imprint on the empire in their own ways.

A must read for those interested in a sort of retelling of a chunk of Indian history.