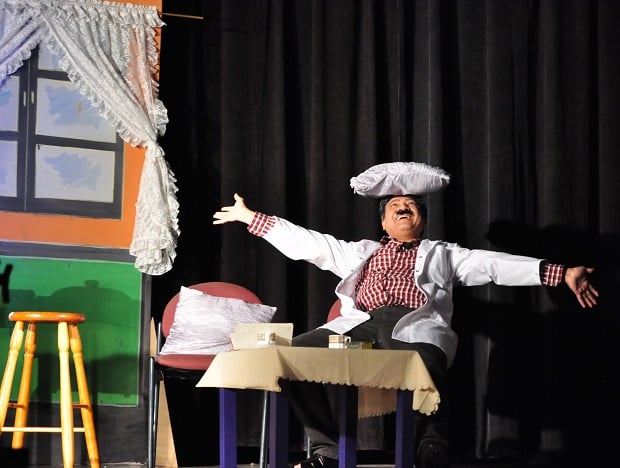 As the city geared up for the recent City2Surf, the Bengali community of Sydney were rugging up to enjoy Natya Utsav, the Bengali Association of NSW’s annual drama evening. The event had the audience in stitches with two comedies, The Love Trap (Premer Phade) and Solution X.

The Love Trap was a comedy of errors, scripted by Sydney’s very talented Ashish Bhattacharya. Well-known for sculpting some truly magnificent Durga idols for the Bengali festive season, Ashish took time out for some theatre.

In The Love Trap, he reinvents an old classic by Gautam Ray, bringing it up to date with modern times and enhancing the plot, to appeal to a community audience where the actors were all friends and family.

The curtains opened to a young woman being rescued by a man from apparent suicide on railroad tracks, muttering something about love lost.

For her first time on stage, Shaila Rahman won over the audience with her vivacious character Anuradha, who’s in love with the concept of love and all things Bollywood. Her object of desire, Dr Rajeshwar Roy (played by Rana Banerjee), is a man nearly double her age. The plot thickens as the doctor lies about already being married, raising a predicament: he needs to find a wife! His ever faithful personal assistant Shobhna (played by Pratibha Banerjee), steps in and of course, she’s always had a secret love for the doctor as well!

Meanwhile, Anuradha’s family are trying to find a groom for her. Her retired army father, played by the director himself, Swapan Trivedi, introduces Taranga (Neel Dey). Taranga, as an impatient young man who thinks it would be more efficient to get the honeymoon out of the way before going into wedding planning, brings in his own moments of comedy. Anuradha’s mother Hemnalini is played to perfection by the veteran Bengali stage mum Mita Majumdar – worried for her darling daughter’s future, the feisty wife bickering with her husband, and the dutiful daughter-in-law too, all with the air of sophistication appropriate for an army officer’s wife.

But it is Bhujanga, a very effeminate dental surgeon (played by Sandipan Ganguli) who has the audience in stitches. (Sandipan’s muse for his wonderful small act was none other than the late Rituporno Ghosh, who in many of his films played transgender roles. Sandipan found a unique solution to overcome a stage actor’s biggest dilemma i.e. what to do with one’s hands! He kept twirling the ends of his dupatta, an act not just amusing to watch, but also completely fitting with his character).

To further confound the situation, Anuradha’s rescuer Rudra (Saikat Das) now professes his love for Anuradha, through poetry, no less. It is a role for which Saikat is well cast, given he has made a name for himself in Bengali radio skits, his wonderful voice and perfect diction a testament to this.

Amid all the hilarious confusion, a family reunion, and a side-splitting dance sequence by the family help played by Ram Misra, elicited many catcalls from the audience!

The second play of the evening, Solution X was written by famous Bengali playwright the late Badal Sarkar and directed by Asim Das. The plot is centred on an eccentric scientist and his nine-year-old daughter Tutul played this time by mischievous debutante Heeya Mitra. Trouble starts when little Tutul mixes up a special concoction of potions in her father’s lab. “Solution X” has the effect of making people lose their inhibitions, making them feel years younger and also bringing out some underlying insecurities. 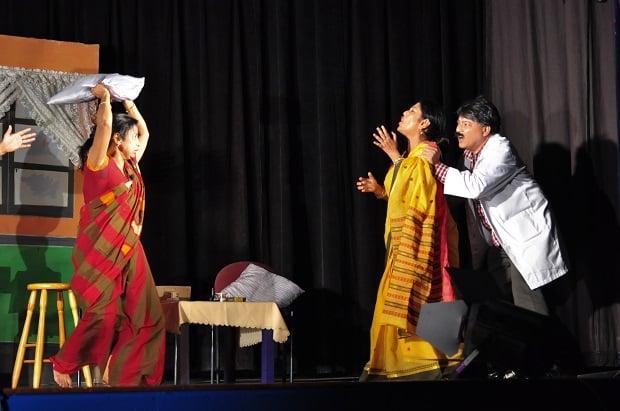 The actors portrayed their roles formidably with perfect comic timing. The scientist played by Srimanta Mukherjee had audiences laughing at his forgetfulness, akin to Einstein. Jhiki Roychoudhury who played the role of the scientist’s wife excelled in her role as she morphed back and forth between a grown woman and a young girl throwing many a tantrum under the influence of Solution X.

Supporting roles of the scientist’s colleagues played by Surja, Rupa Roy, Samya Mitra and Deepak Hor were all fantastically portrayed.

Taking time off work and family commitments requires people that are passionate about the art of drama and this group definitely was! The directors both wove their own creativity into their plays, whether via soundtracks, eccentric gesticulation or colourful set design, every detail adding to the success of the play.