When Kailash Bhatnagar first encountered Aboriginal art, she was reminded immediately of the drawings that she made annually for the festival of Ahoi Ashtami back in India.

These drawings are created for the festival dedicated to the Goddess Ahoi, the Hindu version of the patron saint of mothers. The main figures in these drawings are simple depictions of little children and animals, but these are enclosed in elaborate decorative borders made up of dotted lines and patterns. 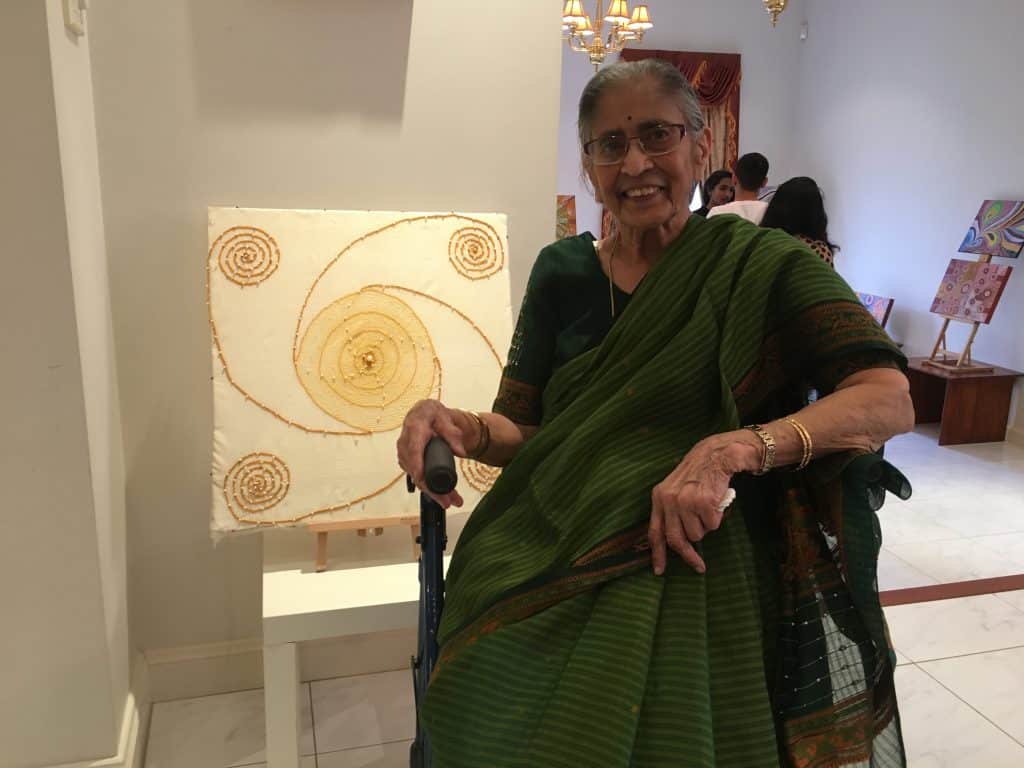 Having created these drawings every year for this festival of the bond between mothers and children, Mrs Bhatnagar was drawn immediately to the undulating dotted patterns in Aboriginal art. Not only did they take her back to her childhood, they also inspired her to paint.

Some six years later, at 94, she presented her first art exhibition.

Held earlier this month at her Epping home, it gave her an opportunity to talk about how she first picked up the paint brush not so long ago.

“It was definitely a spiritual connection when I saw my first dot painting up close,” Mrs Bhatnagar said. “It made me certain that there is a deeper link between Australia’s Indigenous people and our own people, a link that goes back thousands of years.”

She was visiting Broome in WA at the time. In her six-month stay there, she went to many art exhibitions and galleries, spoke to artists, and read extensively.

As creative possibilities began to suggest themselves to her, she resorted to the comfort of an old skill – embroidery – to present her own versions of the new ideas to which she was being exposed. In Anant ki or (Towards Eternity), her skilful use of chain stitch, beading and delicate stem stitch, relay the underlying message effectively. 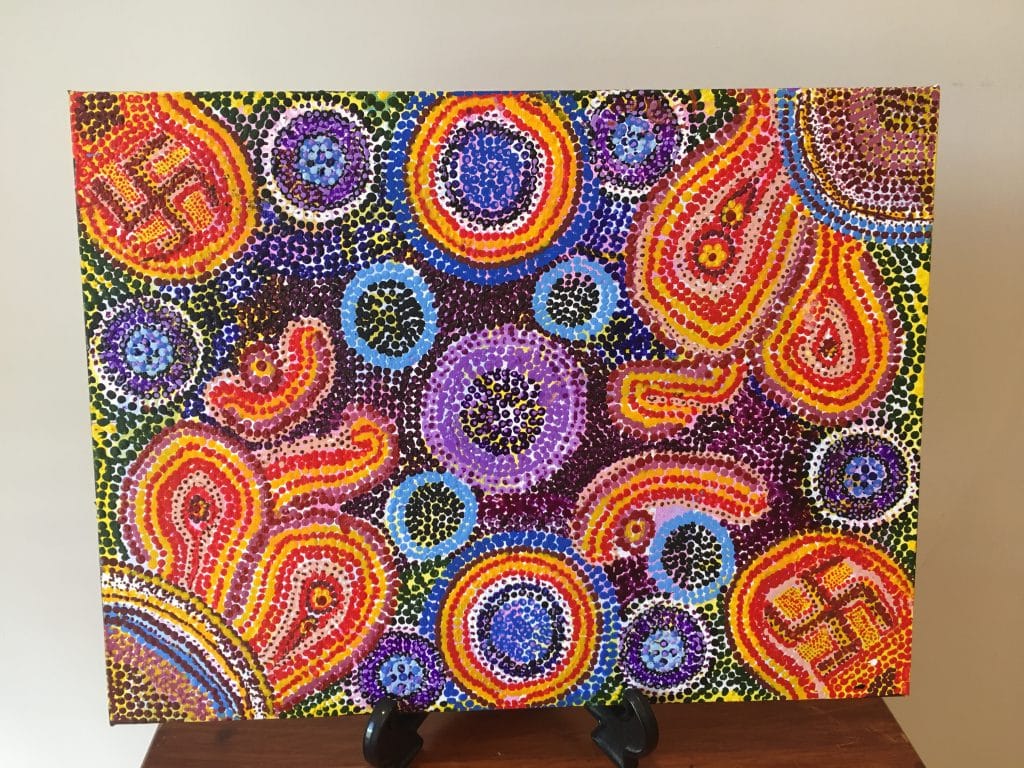 But by now, a whole new passion had been ignited.

Already in her late 80s, at a time when regular people are slowing down, she felt an urge to try an entirely new skill.

“I had never painted in the modern sense before,” she revealed. “My painting was restricted to the Ahoi drawings that were made on the walls, and on paper later.”

There was no stopping her now. 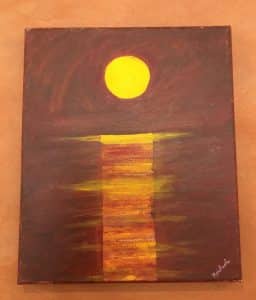 Completely self-taught, she experimented with landscapes in oil, but it was with the abstracts that she found her true love. Acrylic also allowed her an ease which helped her to become prolific.

In her work, Mrs Bhatnagar brought into play the new concepts that allured, as well as bits from her heritage, to create her dot paintings.

The swastik symbol and the Om sign are unmistakable elements in her pieces, as she finds novel ways to express herself. So are the mandala patterns – the Hindu and Buddhist representations of the universe, and the cyclical nature of life. 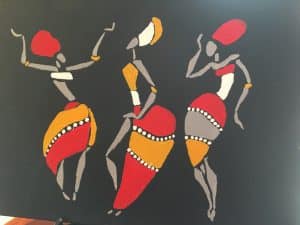 The elemental nature in Mrs Bhatnagar’s works is clearly derived from her deep-rooted Hindu spiritualism.

The piece Staircase to the Moon depicts this very philosophy. The painting comes from the natural phenomenon of the same name, a common occurrence in Roebuck Bay WA when the full moon rises over the exposed tidal flats.

Describing, Mrs Bhatnagar recounted, “There was pin drop silence as the moon ascended – in well-calculated steps in a straight line. Dil itna khush hua, ki aisa laga ki lapak ke chand ko godi mein le loon. It filled my heart with such happiness that I felt like jumping up to the moon and embracing it.”

Painting the moon, another worshipped deity in Hinduism, in this new avatar gave Mrs Bhatnagar not only much pleasure but also increased confidence.

“The black in this painting beckoned to me, and I decided next to paint on a black canvas,” she revealed. “And that is how the painting of the dancers came about.”

Of course it was a challenge – as she discovered that she had to paint the figures in white first, and then paint the colours over!

Young violinist to perform with Australian World Orchestra in India