Home Main Category Up close and personal with the King

No visiting cricketer – and possibly no athlete – has ever toured Australia with as many arrows trained on his back as Virat Kohli. Whether it is the niggly opposition, the provocative Australian media, or the hostile local fans at the ground and on social media, everyone wants their pound of flesh. For his part, Kohli has doubled down, perfectly at ease with his role as pantomime villain for as long as the results keep permitting it. Off the field and away from the spotlight, however, Kohli’s relaxed demeanour belies the hungry fire that rages within. 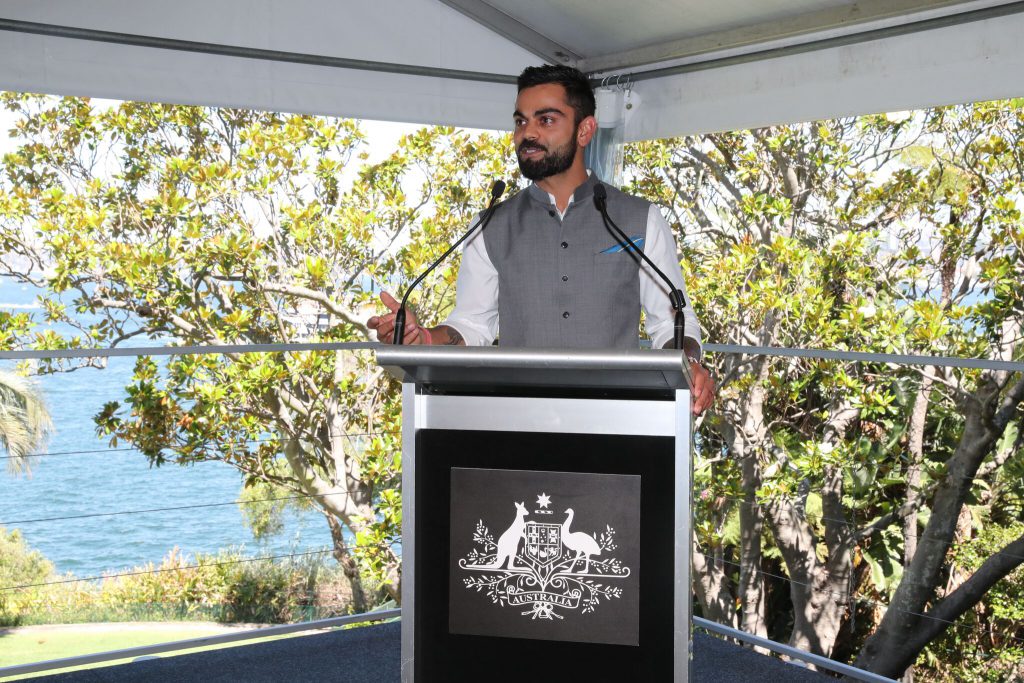 Troubled by a back injury throughout India’s victory in the Boxing Day Test – a victory that ultimately proved pivotal in ensuring India’s historic 2-1 series win, given the inclement weather in Sydney – the Indian captain spent much of his free time at the team hotel under the watchful eyes of team physio Patrick Farhart and strength and conditioning coach Basu Shanker. Each morning and evening, Kohli’s relaxation came in the form of rehabilitation exercises in the hotel pool and spa, offering those around him a fascinating insight into his off-field persona.

Despite being by some distance the most worshipped cricketer in the world – a title that, admittedly, is all but promised to an Indian player – it is obvious to even the casual observer that Kohli does not walk as a Colossus, detached from reality as one might expect of someone with over 28 million Instagram followers. The laugh of a child playing in the pool, the fleeting moment of agony upon dipping into a 40 degree spa, the serene Melbourne sunset; each brings a smile to his face, as it would to the rest of us. Even as Farhart sits by the pool, engrossed by his phone, Kohli calls out to him, “It’s a beautiful pool, no?”

Yet even in the peaceful ambience of a secluded and near-empty rooftop pool overlooking the Melbourne skyline, there is one thought firmly at the forefront of Kohli’s mind: the battle at hand. And like any fan, Kohli loves to talk cricket, no matter when and with whom. As much as Kohli asserts that he does not read the news media or otherwise indulge in the court of public opinion, it is difficult to believe, given the extent to which he lives and breathes the game.

“Did you hear Ravi Shastri’s comments back to Kerry O’Keeffe the other night?” he says to me, then proceeding to recount in detail Shastri’s on-air riposte to O’Keeffe’s commentary likening a Ranji Trophy bowling attack to “canteen staff”.

Kohli then turns the conversation to the declining strength of Australian shield cricket, with more than a hint of indignation and disbelief in his voice that it was the quality of India’s domestic circuit that was being questioned. It is no secret that O’Keeffe’s remarks lit a fire under the Indian camp; bowling coach Bharat Arun later labelled the comments “offensive” and admitted they “hurt”, while Kohli made it a point to lavish praise on the Indian first-class set-up in his post-match interviews following the team’s win in Melbourne. Ironically, much of the home team’s post-series dissection has hinged on how to overcome perhaps Australia’s worst-ever Sheffield Shield stocks.

You could sense that Kohli was in his element now. He spoke of an ex-Australian player who had been seeking an interview with him during the Test series, a request that Kohli declined until at least after the conclusion of the series. According to Kohli, this did not sit well with that player. “Only when they want something, they [certain ex-players] will speak to you a certain way,” he says. “But it doesn’t matter to me if I’m talking to you or someone who has 15,000 runs, at the end of the day it’s a human interaction. I’m not going to go above and beyond just because you have 15,000 runs. They don’t see it that way, but I do.”

Kohli’s self-reflection continued, but it was candid, rather than contrived. “To be honest, I don’t care what people have to say,” he says. “I don’t have to hold up a banner and say, ‘This is me’. There’s always someone up there watching and judging,” he concludes, gesturing to the skies above.

On each of his visits to the pool, Kohli entertains conversations with anyone who approaches him, even as the hotelier and team minder watch on closely, ready to intervene should it become necessary. He is polite, respectful and his smile and eye contact do not waver. He also listens with the kind of intense attention with which he regards a ball hurled at him across 22 yards.

Kohli’s generosity goes beyond conversation; in the euphoria following the Indian team’s win at the MCG, he pauses to give away a set of signed pads to a delighted young Indian fan. Even in the denouement of what he crowned the biggest achievement of his already illustrious career – hoisting the Border-Gavaskar trophy to celebrate winning a series on Australian soil for the first time – Kohli stepped aside almost immediately, handed the trophy to India’s most inexperienced player, Mayank Agarwal, and did not once seek to take centre stage.

This gesture, more than perhaps any other, proved this much: this Indian captain is every bit as invested in his team as they are in him. As long as that equilibrium is maintained, the inferno within Kohli will burn for years to come. It can be no surprise that Kohli has referred to the series win merely as a “stepping stone” to greater heights ahead.

After dressing, and before leaving the pool, Kohli comes by to say goodbye. At the end of such an exceedingly normal interaction, for just a moment it was easy to forget that you had been in the presence of royalty.

Plenty of Indian links but…

India to have world’s only completely-electrified large railway network