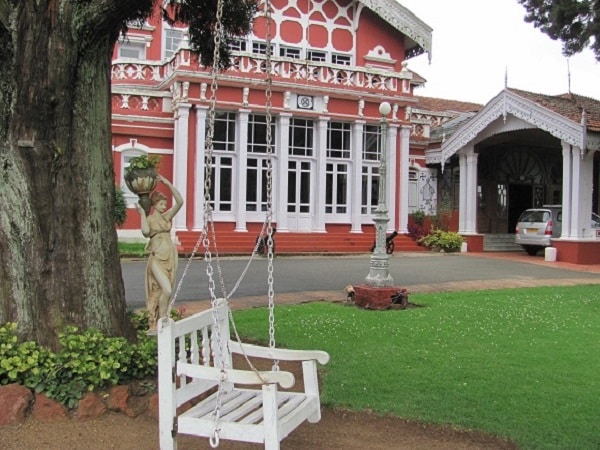 Six hours and many hairpin bends later I arrived by public bus from Mysore in Udhagamandalam, better known as Ooty, in the Western Ghats of India’s southern state of Tamil Nadu. Climbing steadily towards the blue Nilgiri Mountains through Bandipur I saw wild boar and deer and forests of rosewood, pine and eucalyptus trees that spread a green canopy high overhead. The clouds were turning grey and the temperature plummeted.
As we approached Ooty the hillsides became dotted with quaint stone cottages and churches, and much of the landscape was quilted with tea bushes.
Called the ‘Queen of Hill Stations’, Ooty was developed in the early 19th century as a retreat for the British residing in Chennai. I walked from the bus station up a steep hill to the Savoy Hotel, dating back to 1829 with charming rooms and cottages arranged around a pretty flower garden and lawn.

After masala tea and samosas taken in the delightful rosewood panelled dining room, I went for a walk to Charing Cross, Ooty’s main shopping area, with its fragrant smells of incense and eucalyptus oil. I kept walking to see the many churches, the late afternoon air becoming misty with swirls of clouds cloaking the mountains.
The Botanical Gardens laid out in 1847 by the Marquis of Tweeddale offer undulating lawns, ornamental plants and reminders of Australia – eucalyptus trees, Norfolk Island pines, red flowering bottle brushes and a large Bunya Pine from South East Queensland.
In need of an Ayurvedic head, shoulder and neck massage after the winding bus ride, I aksed for ‘Not too much oil, please’, but it was too late, my head was soon lathered in it. For a glimpse into a bygone era, I hoped to visit the Ootacamund Club, perched on a hillside near the Savoy Hotel.
With my intense charm offensive I thought I’d get past the security guard, but I was barred from entering just as Winston Churchill had been denied entry decades earlier. “Members only,” the guard said, perhaps noticing that the oil had caused my hair to form peculiar looking tufts. This was where snooker was invented and I was unable to enter to take an image of the very billiard table that was used.

The next day I set off to Fernhills Palace, once a summer palace of the Maharaja of Mysore, with splendidly grand rooms and a bar filled with hunting trophies and old photographs, before walking on to Ooty Lake, a popular picnic spot with boating facilities constructed in 1824.

The Nilgiri Mountains have 24 peaks higher than 2000 metres with Doddabetta Peak the highest. Visitors come for outdoor activities including bird watching, golf, hiking and horseback riding and to soak up the atmosphere of a traditional and quintessentially Indian mountain resort.
The market and shops along Commercial Road took me past the curiously named Hobart Middle School and on to the Collector’s Office and other noteworthy buildings including Higginbothams bookshop. Thanks to the British, who found the mountain climate perfect for making chocolate, there are many shops that sell large roughly broken pieces sold plain or flavoured with almond, raisin, fig and honey.
The indigenous inhabitants of the Nilgiri Hills are the Toda and their village is found on the outskirts of Ooty. Wrapped in traditional cloaks of white, red and black embroidery they also offer beautiful pieces of embroidered cloth for sale.
That evening in the Savoy Hotel’s dining room, I joined three men from New Zealand who had travelled to Ooty just to catch the historic Nilgiri Mountain Train. Going only as far as Coonoor they didn’t realise that the train is powered by diesel to Coonoor, before the engine is switched to steam for the second leg to Mettupalayam.

With blue and yellow carriages, the Nilgiri Mountain Train descends from 2203 to 326 metres covering a distance of only 46 kilometres in four and a half hours coming up, or three hours going down, to Mettupalayam. Designed by a Swiss engineer, the railway is grouped with the Darjeeling Himalayan Railway and the Kalka Shimla Railway to form a world heritage site.

The track has 250 bridges, 208 curves, 16 tunnels and passes scenery of tea estates, terraced gardens, pine and evergreen forests before becoming even more spectacular with viaducts and sharp bends past waterfalls and huge granite cliffs dropping down to the plains below to the groves of slender areca nut palms, for which the area is renowned. Since 1899 the train has chugged along providing a journey that is one of the most scenic in south India.
After negotiating to share a taxi with a French family, I travelled onto Coimbatore and back to the modern world, leaving Ooty, a destination that epitomises a bygone era, behind.