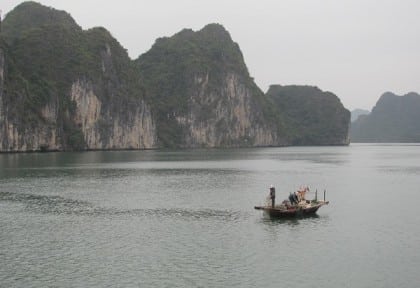 Vietnam is changing fast, but with a unique heritage and astonishing natural beauty, this country remains a traveller’s paradise

The heart of Vietnam

With broad tree-lined boulevards, tranquil lakes and parks, beautiful pagodas and crumbling villas reflecting a blend of Indo-Chinese and French colonial influences, Hanoi has a grace unlike any other South-East Asian city. Established as Vietnam’s capital in 1010 it has long been the country’s artistic and cultural heart.


At its centre, Hoan Kiem Lake, named after a legendary turtle, is at its most serene early in the morning when the Turtle Pagoda and Ngoc Son Temple, reached by a red bridge, are shrouded by mist and locals gather to practice tai chi in slow motion.
Just north of the lake is the Old Quarter, or 36 streets, dating back to the 13th century which retains much of the original streetscape. Each street is named after the merchant guild that once traded there including silver, tin, rattan, bamboo and silk, with the pavements still doubling up as working space. Wander along the tangle of winding streets and back lanes and you’ll discover cafes, boutiques and street vendors offering bowls of pho, rice paper rolls, juices and diced fruit served curb side.

South is the French Quarter with boulevards lined with banyan and tamarind trees, crumbling villas, elegant boutiques, restaurants and art galleries showcasing Hanoi’s contemporary art scene. The stunning Opera House is also located here, as is one of Asia’s most legendary hotels, the Metropole, where Graham Greene penned part of The Quiet American.
Lying west of the Old Quarter is the Embassy District, home to many splendid villas as well as Hanoi’s most impressive monuments including the Temple of Literature, founded in 1070, and the oldest University in Vietnam. Nearby, Ho Chi Minh’s mausoleum overlooks Ba Dinh Square where he read his self-penned Declaration of Independence in 1945.

Hanoi also has many museums including the National Museum of Vietnamese History with a fine collection of artefacts as well as explanations of its turbulent history. The Ethnology Museum is devoted to the numerous ethnic minorities and the Museum of Vietnamese Women portrays the role women played in the development of Vietnam.
A city that is ideal for exploring on foot, the strong scent you are most likely to encounter is the heady aroma of roasting coffee beans. When the French introduced coffee, along with pate, croissants and baguettes to Vietnam in the 19th century, Asia’s first coffee culture was born. Vietnam is now the second largest coffee producer in the world, though the coffee is gritty, dark and thick, best stirred with sweetened evaporated milk or try it with coconut, cocoa or egg. Head for Cafe Cho Ca Phe at 46 Cau Go Lane for great coffee, a funky ambience, great hosts and a furry resident cat clipped like a poodle.

Every weekend many of the streets in the Old Quarter are closed to traffic as they turn into a gathering place with impromptu entertainment from street artists offering calligraphy and balloon sculptures, musicians playing traditional tunes, ballads and rock, street vendors and market stalls. It’s a great way to engage with the locals by joining in with games including badminton, ball games, bamboo dancing and tug of war.
Like much of Vietnam, Hanoi is changing fast. Motorbikes have replaced bicycles and rickshaws, but the capital retains its antique fixtures, its produce markets and joss stick burning temples, crumbling yellow villas, tree lined avenues, lakes and bustling streets.

On arrival the welcome card from the General Manager of the Metropole read: “Please discover the emotions, history and elegance of the Grande Dame.” A statement equally applicable to Hanoi itself, a vibrant pulsating city that treasures its past.

Stretching across a vast plain, the Red River extends for 1200 kilometres from China’s Yunnan Province down across northern Vietnam to the Gulf of Tonkin.
Joining 18 other passengers and our guides, Vu and Duke, we departed from Hanoi by mini bus for the short drive to begin our cruise.


The ten-night cruise on-board the Angkor Pandaw along the Red River and its tributaries provides the opportunity to experience the rural countryside of Vietnam’s north. Here there are villages, forests, minority tribes, limestone karsts jutting out from the sea, gold lacquered Buddhas, temples and unexpectedly a proliferation of Catholic churches.
As we commenced our cruise downstream, the heavily silt laded river was reddish brown, the sky overcast and the river banks green with plots carefully tended to by women wearing conical hats. There were rice paddies, green beans making their climb along bamboo trellising, fields of golden corn, clumps of eggplant and, at the water’s edge, peanuts!

While there were many bridges across the river, as towns turned to villages, ferries crisscrossed from one side of the river to the other transporting passengers and their motorbikes across. Small fishing boats powered by a foot pedal showed us that in parts of Vietnam life continues largely unchanged as it has done for centuries.
With days that were warm and sunny, the cruise offered excursions to experience daily life with walks and bicycle rides through the countryside stopping at villages, many of which specialise in a specific craft. Here we met with woodcarvers making intricate carvings by hand from jackfruit, blacksmiths hammering and shaping knives, and women stitching conical hats. There were also villages dedicated to bonsai, ceramics and bamboo where traditions are passed from one generation to the next.
Many of the villages are also ancient including Duong Lam Village where large wooden entry doors lead to family compounds within. Over green tea, an elderly man recounted how his family had lived in the same house for 15 generations since it was built in 1650 and had continued to produce a potent rice wine stored in large earthen jars.

There were pagodas to climb, with Tay Phuong Pagoda having 237 steep steps, and cathedrals to visit, including the beautiful Phat Diem Cathedral constructed in 1892 from stone combining gothic and oriental architectural features.
Performances were also organised for us including a lion dance, a drumming and dance performance within an old temple and a water puppet show at Thanh Ha village at which we were soon joined by many locals.

As we arrived at the busy port city of Haiphong a wind brought a chill to the air. Turning sharply we entered the Gulf of Tonkin before making our way to Halong Bay, one of the great natural wonders of the world that covers an area of 1500 square kilometres.
For the millions of tourists who visit Halong Bay each year, most either fly into the airport or arrive after five hours of driving from Hanoi along a busy traffic choked highway of honking horns. Instead, we had the altogether quite splendid experience of arriving at Halong Bay by cruising there – catching sight in the fading light of thousands of jagged limestone karsts, caves and grottos. That night we enjoyed Halong Bay in silence with only the slap of water on the hull.
Perhaps the most beautiful sight in Vietnam, after waking at sunrise the next morning I saw the limestone peaks taking shape as they emerged from the early morning mist and fishermen cast nets from their sampans across the water.

Transferring to a smaller boat for a day of sightseeing, we sailed past junks with their saffron coloured sails before going kayaking through a cave. The few lemurs in the trees were observed by numerous selfie snapping tourists.
On our return to the Angkor Pandaw it began to drizzle and while all the passengers sought shelter below I found myself alone on the upper deck. As we glided back over the shimmering water I took in this vast and stunningly beautiful landscape and for a time had it all to myself.

Vietnam Airlines (direct), Jetstar, Air Asia and Singapore Airlines fly to Hanoi. From the airport prearrange a pick up from your hotel (US$20-25) or catch a metered taxi (around VND 400,000).

Opened in 1901 the Hotel Metropole Hanoi remains the city’s best address (www.sofitel-legend.com) while the Hotel de l’Opera is another great choice (www.hoteldelopera.com).

Hostels are clustered in the Old Quarter including the Golden Snake Hostel.

Many of Hanoi’s boutiques are concentrated along and just off Hang Gai and Hang Dao in the Old Quarter.

With a maximum of 32 guests, the Angkor Pandaw is beautifully hand finished in brass and teak and an informal ambience convivial to relaxation (www.pandaw.com).