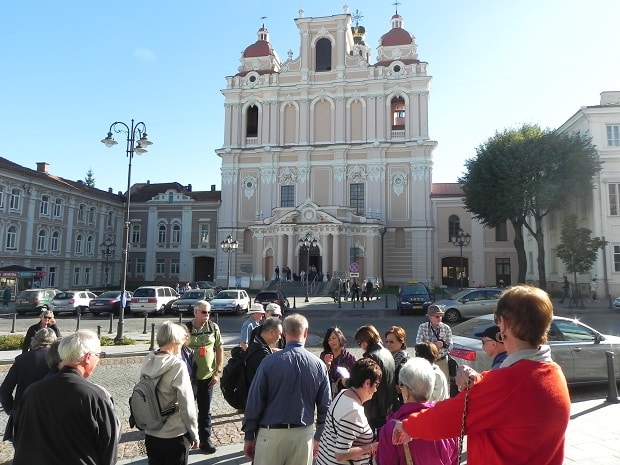 The moment the word ‘Baltic’ is pronounced, the blue waters of Baltic Sea, big built ‘Balt’ people and seaboard countries of Lithuania, Latvia and Estonia come to mind. After enduring many dramatic incarnations in the last one hundred years, these three tiny nations shrugged off their dead weight and have now emerged as rising stars on the European tourist circuit.

The charms of these states unfolded for me as a part of an ‘Insight Vacations’ tour; I travelled by road from Warsaw in Poland to St Petersburg in Russia through their lands, spending generous time at their capital cities, Vilnius, Riga and Tallinn.

The history of the Baltic goes back almost 800 years with neighbours like Germany, Russia, Sweden and Poland casting interested eyes over the territory until WWI when Lithuania, Latvia and Estonia were born as autonomous sovereigns. However their independence was short lived. During WWII after a period of Nazi occupation, they fell under Stalin’s influence and remained a part of the Soviet Union till its dissolution in 1991, which returned them sovereignty and heydays.

After initial hiccups, the progress of these three nations in the last two decades is inspiring. They are now members of the European Union, economically robust, technically savvy and welcoming to the outside world. Some traditional Baltic food and culture like oral folklores and song festivals perhaps, are the only common platform among them, if we ignore the decaying legacies of the communist Soviet regime. In fact, as we swiftly pass through rural settings and small villages and towns, some impoverished remnants of the Soviet-era are still noticeable like small huts, dilapidated buildings, empty racks in stores and poverty-stricken people. However it’s a different story in the capitals where signs of prosperity and all elements of contemporary lifestyle are explicit.

The three capitals are architecturally very rich: Vilnius in Baroque, Riga in Art Nouveau and Tallinn in Medieval styles respectively. Their impressive ensemble of historical edifices inspired UNESCO in 1997, to mark their Old Towns as World Heritage sites and tourists spent most of their time admiring the quintessential attractions there.

Festooned with open courtyards and dusty cobbled streets, Vilnius at first sight strikes one as an artist’s enclave. We enjoy its panoramic fabric from a redbrick castle tower built on the top of a hill, named after Gediminas, a Lithuanian Grand Duke who founded the city in the 14th century. The silhouette of the cityscape below, presided by decorated spires and jewelled domes of numerous churches standing on both sides of River Neris, is a visual feast.

At the base of the hill is the Cathedral Square where the city’s heart beats, and most of the touristy action occurs. The precinct buzzes with singers, folk dancers, street performers and friendly locals, all giving visitors a taste of local life.

At the centre of the square is an equestrian statue of Gediminas overlooking the Royal Palace and Vilnius Cathedral, the latter recognised as the nation’s most venerated cultural and religious sanctuary. During his visit to Lithuania in 1993, Pope John Paul II said a mass here to pay homage the city’s patron saint Casimir. Several statues decorate the exterior of this architectural masterpiece, while the interior boasts of some awe-inspiring paintings and frescos. A must-see in Vilnius is the Trakai Castle. Located outside the city limits on the shores of an idyllic lake, the fairytale-like 14th century bastion has a museum, the medieval collections of which provide an interesting insight into the history of the period.

The beauty of Riga is so accomplished and its ambience is so vibrant that fancy titles like ‘Paris of the North’ and the ‘Second City that Never Sleeps’ are tacked to the Latvian capital.

Like Vilnius, Riga Old Town is equally charismatic and the entire city spread is dotted with churches and cathedrals, most significant being the enormous Dome Cathedral, still the largest Christian shrine in the Baltic.

A good way of picking up a different perspective of Riga is by taking a leisurely cruise along the city-canals that stream through the manicured parkland before joining the river.

Our next stop Tallinn, is the smallest of the three Baltic capitals in size, but perhaps largest in terms of its appeal. A spectacular vista of medieval architecture greets us as we enter the metropolis where the Old Town again stands as the nucleus of most of its wonders. Bestowed with a clutter of turrets, spires and winding streets, the cobblestoned labyrinth of Old Town hosts magnificent churches, towers and historical monuments that keep most visitors locked within its perimeter during their stay in the city.

Town Hall Square, dominated by the 800-year-old Gothic Town Hall structure, is the focus point of Tallinn, and its most photogenic spot. During summer, locals and visitors crowd its numerous outdoor cafes, drink aromatic coffee or sip wine while watching the bustle around. At one side of the square stands a Tallinn institution, a pharmacy originally established in the 15th century.  Two ‘must do’ items in Tallinn are to hike up to the top of Toompea Hill for a visual feast, and to visit the Alexander Nevsky Orthodox Cathedral, a striking example of Russian influence in the Baltic.

The three Baltic countries are rich in history, culturally astute and architecturally bejewelled. Unfortunately they were all hidden under the Red Flag from the rest of the world for almost the entire 20th century. Now with doors open, the nations are generously adding 21st century elements to their old and traditional remains. The cityscapes are clustered with luxury hotels, trendy restaurants, bar, cafes and even nightclubs matching up in lifestyle to any modern European venue. Shopping opportunities are reasonable, but the item to fill in your bags is products made of amber, a tree resin highly appreciated for its colour and natural beauty since Neolithic times. Public transportation is available; however the capitals are small enough to be covered on foot.

The Baltic nations can be independently travelled, but to experience the best in a short time, it’s better to opt for an organised tour which makes the entire journey convenient and hassle free.

Getting There Fly Emirates (www.emirates.com) to Warsaw via Dubai and fly out from St Petersburg or Moscow if you are touring Russia as well. International bus operators like Eurolines (www.eurolines.com) regularly run from Warsaw to the Baltic capital cities

Visa Australian passport holders will require visa only to enter Russia. Check http://www.australia.mid.ru for details. No visa is required for Poland and Baltic countries.