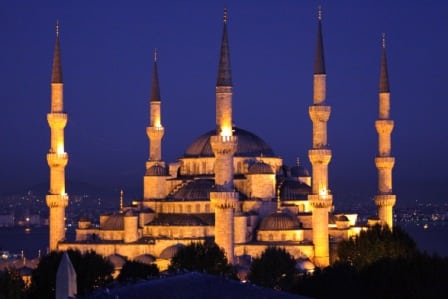 Reading Time: 4 minutesSANDIP HOR visits The city of Istanbul, which  offers a plethora of the traditional, historic and modern

The first thing I did after arriving in Istanbul was to throw up my arms in despair, simply because I could not decide on what to miss out on from a wide range of attractions that the magical city has on its menu. However, the concierge at the Crown Plaza Hotel came to my rescue, providing a top-ten itinerary that is ‘inescapable’ for first time visitors to the land, like me. Istanbul is often touted in guidebooks as the ‘Turkish mystique par excellence’.
Founded by the Greeks in the 5th century BC as Byzantium, renamed Constantinople 800 years later by Roman Emperor Constantine, and finally called Istanbul by the 15th century Ottoman Sultans, this historic settlement uniquely stands astride two continents, Asia and Europe. It boasts to be the only metropolis that has served as the capital of two consecutive Christian and Islamic empires, a distinctive position that crafted the region’s history for over 2500 years.
Edging the shores of the turquoise blue Bosphorus Sea with a majestic skyline dominated by palace domes, mosque minarets, church spires and regal monuments, Istanbul is reputed to strike anyone as a domain where natural beauty has been enhanced by human endeavour, bequeathing the land with an ensemble of marvels which can’t be covered in one visit. However, a reasonable impression can be achieved by visiting the ‘top ten’ listed below.

1. Blue Mosque
What the Eiffel Tower is to Paris, or Big Ben to London, the Blue Mosque, built in 1650 is the most famous landmark of Istanbul. The exterior of this 400 year old shrine has no pinch of blue at all; the name comes from its 20,000 odd hand-made ceramic blue tiles that gracefully decorate the interior. With 6 minarets and 8 domes, it stands within a spacious courtyard as a great sample of Islamic architecture from the classical period.

2. Süleymaniye Mosque
Istanbul can be easily termed as the ‘City of Mosques’ as you can see one in almost every corner. All of them are architecturally impressive and demand notice; however apart from Blue Mosque, the other one on most visitors’ itineraries is the Süleymaniye Mosque.  It is the city’s largest and is considered as the greatest achievement of famous 16th century Ottoman architect Mimar Sinan.

3. Topkapi Palace
Residence of the Ottoman Sultans for 400 years, Topkapi Palace is not a single edifice but a band of many, like the Forbidden Palace in Beijing, all dotted on an expansive garden-courtyard. Many ancient buildings have been restored and converted to museums that display Ottoman memorabilia from their precious jewels and royal clothing, to sturdy swords that have beheaded their challengers. However, the most interesting in the precinct is the harem quarter where the Sultan’s numerous wives and mistresses used to live.

4. Dolmabahce Palace
When Topkapi Palace was abandoned in the mid 19th century, Dolmabahce Palace became the royal quarter. Edged on the Bosphorus with a 600m waterside frontage, this grand white edifice impresses visitors by its excessive display of ostentatious wealth. One good example is a 4000 kg chandelier with 750 bulbs, one of the largest ever made, adorning the hugely ornamented throne room.

5. Hagia Sophia
If you have time to see only one thing in Istanbul, it has to be the Hagia Sophia, the legendary legacy of the Christian Byzantian Empire. Originally built as a church, it was later converted to a mosque by the Islamic Ottomans. For almost a millennium it boasted to be the largest enclosed space in the world, designed lavishly to show locals and foreigners the strength and wealth of the Turkish emperors. The stunning inside mosaic artwork testifies to that claim. Since 1934, this iconic sanctuary has been open to the public as a museum.

6. Grand Bazaar
You can feel the pulse of Istanbul when visiting the mystic Grand Bazaar, said to be the largest covered market in the world. There are around four thousand shops selling an array of merchandise from cheap souvenirs, homeware and delicious Turkish delights, to expensive handbags, carpets, shawls, scarves and shoes. It is a paradise for shopaholics. Also worth visiting is the nearby Spice Bazaar which has been the city’s premier spice outlet for several centuries.

7. Bosphorus cruise
Cruising in the Bosphorus Strait, which separates Europe and Asia, gives visitors the opportunity to see a silhouette of Istanbul from another perspective. Taking the cruise makes it possible to visit the suburb of Uskudar which lies on the Asian side, and offers far more Middle Eastern flavours than its European counterpart.

8. Galata Tower
The 1349-built, 61-metre high monument dominating the city’s skyline finds a place in this list because from the viewing gallery of this circular tower, one gets the best 360 degree panoramic view of Istanbul.

9. Istiklal Street
This is the city’s liveliest thoroughfare through which thousands trundle every day. The only vehicular movement breaking the flood of human activity is the slow passage of nostalgic wooden trams, which sometime stop service if the crowd is too thick to penetrate. Both sides of the street are lined with elite shops selling high-class accessories and jewellery, art galleries, cafes where discussions are vibrant, and passages dotted with drinking joints. Most of the buildings surfaced here at the turn of the 20th century under the influence of the art nouveau movement.

10. Cagaloglu Hamami
Without a traditional Turkish bath at a public bathhouse, a visit to Istanbul is incomplete. There are almost hundreds to choose from, but the best place to take a watery plunge is the Cagaloglu Hamami built in 1741. Here many renowned personages from King Edward VIII and Florence Nightingale, to John Travolta and Cameron Diaz have experienced the traditional practice. It is so famous and popular that American author Patricia Schultz’s has listed it in her popular book titled ‘1000 places to see before you die’. The hour long exercise generally comprises of a steam bath, body massage and finally a splurge with bucket-loads of water, soap and shampoo to bring a clean and happy ending to the ritual.

Fact File
Getting there: Singapore Airlines (www.singaporeair.com) flies from major Australian cities to Istanbul via Singapore.
Accommodation: Istanbul has no shortage of hotels to suit your budget. The Crown Plaza (www.crowneplazaistanbul.com) in the Old City is one option. Otherwise see www.expedia.com.au or www.booking.com for best deals available
Cagaloglu Hamami: See www.cagalogluhamami.com.tr for address and pricing
Currency: Turkish Lira (TRY), 1 AUD = 1.8 TRY (but check closer to travel date, as may have changed since article was written).
[geo_mashup_map]