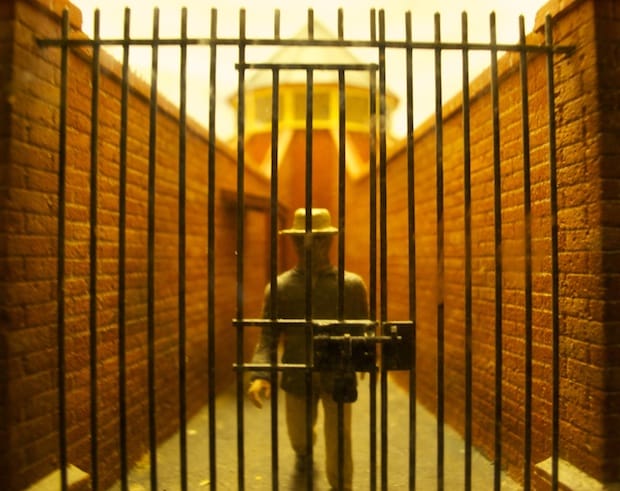 Reading Time: 4 minutesSpooky sightings, wailing ghosts and other paranormal activity can be found in old Australian gaols by visitors looking for a scare

Prisons are places of oppression, hopelessness and negative vibes. Throw in century-old buildings (many with cemeteries), tales of torture, hangings and executions, and you have a perfect place for ghosts to hang out. Meet the spooks lurking in the top ten haunted prisons of Australia.

Situated 160 km north of Sydney, Maitland Gaol was the longest running prison in Australia when it closed in 1998. Apparently, an inmate indulging in the dark arts was once incarcerated here. After forming a pact with the devil, he committed suicide. The guard who cleaned up the mess was later found dead in his bathroom with his wrist slashed. A message scrawled in his blood said that he had to kill himself in order to contain the satanic forces. The cell, with occult graffiti on the walls, remains padlocked to this day. Visitors have seen the ghost of an inmate rocking back and forth in one of the cells. Eerie presences have been felt and sounds of men whispering have been reported.

There are many stories of ghostly activity associated with this gaol which was used to hold male convicts during the 1800s and 1900s. A dense feeling of oppression hangs in the air – as does a noose over a bloodstained execution platform. The horror of the place, steeped in torture and death, is there for anyone to experience during tours organised by the National Trust of Australia which now manages the place.

This was the main gaol of Darwin for almost a century. Built in 1882, it has its fair share of other worldly presences. Prisoners reported hearing sad moans coming from empty cells, and doors opened and slammed at times when there were no guards around. The gaol ceased operation in 1979 and is now a museum depicting the social histories of the Northern Territory. Visitors have reportedly felt an invisible hand glide over the steel bars and heard sounds of a body being dragged along one of the corridors.

Brisbane Gaol or Boggo Road Gaol is famous for its underground solitary confinement cells known as the ‘Black Hole’. It is a heritage listed prison that opened in 1883 and closed in 1989. The gaol is said to be haunted by the tormented soul of an old prison guard who was brutally murdered by two inmates. At night he can be seen walking along the fence outside the cell block with a bunch of keys rattling against his side.

Paranormal activity, strange sensations, and weird noises have been reported by visitors to this prison which was built by convicts in 1855. It was a place of incarceration for locally-sentenced prisoners and many were executed for murder and rape. The facility ceased operation in 1991 and is now a public museum managed by the government of Western Australia. Some women have experienced a warm pressure, like a cloud of steam enveloping them, as they toured a cell once occupied by a sexual offender.

Completed in 1881, this was the first Australian-designed gaol, planned by colonial architect James Barnett. Visitors claim to have heard ghostly voices and a photograph taken during a tour shows an unexplained white haze which seems to be an apparition of two figures. The gaol closed down in 1927 and was used as extra classroom space for Wentworth Central School until 1963. It is now a popular tourist attraction.

The ghost of Elizabeth Scott, the first woman to be executed at the prison, is believed to still haunt the Old Melbourne Gaol. Paranormal sightings and strange voices have been heard near the cells and a monstrous, ghostly figure has been recorded hovering in doorways. This gaol opened in 1845 and continued to operate until 1924. One of its most notorious inmates was bushranger Ned Kelly. The gaol is now a museum housing prison memorabilia.

Built in 1850 in Coburg, this was one of Australia’s most notorious prisons until it closed in 1997. Records show 44 bodies were buried in the prison in an upright position so that they may never rest. Maybe these are the restless spirits that still haunt the place. Prison staff have reported seeing a strange fog that resembles a woman’s silhouette, and one of the guards recently saw the fog while patrolling. His dog shrank back in fright and refuses to go there anymore. Parts of the prison are being converted into residential apartments.

In operation from 1841 to 1988, this was the first permanent gaol of South Australia. This is not its only distinction, however, as it is apparently quite a popular stomping ground for spirits of bodies long departed. A young girl has been sighted walking and dissolving through the wall of the guard tower, while the ghost of a man has been seen strolling along the upper walkway. Visitors have reported feeling overwhelming sadness in the rooms used by executioners. Unexplained lights and noises are also part of the Adelaide Gaol haunting.

East Sydney Technical College of TAFE was once Darlinghurst Gaol and Sydneysiders know it is haunted. The gaol closed down in 1914 and the building was handed over to the Department of Education in 1921. The hauntings began soon after. Paranormal activity has often been seen in a classroom and two other rooms where prisoners were kept before execution. Lights come on and doors slam of their own accord. The ghost of an Asian lady lingers – apparently looking for her husband who was a prisoner at the gaol. A teacher claims to have seen the head of a ghost without a body in the toilet and a ghost is said to have followed another teacher home from TAFE.