The heart of India 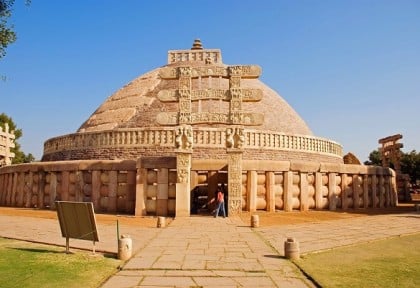 A relatively large state in central India, Madhya Pradesh is a current favourite on the tourism circuit mainly because of its great diversity in offerings – from rich history, colourful culture and great artistic treasures to natural splendour, teeming wildlife and pilgrimage sites of various faiths.
Add to this the good roads, contemporary infrastructure, great accommodation, mouthwatering cuisine and a friendly and safe environment, and you have a winning destination on the bucket list of many travel enthusiasts, both within India and abroad.

The history of Madhya Pradesh dates back to the time of the great Mauryan King Ashoka, three centuries before Christ was born and subsequent sovereignties by notable Hindu and Muslim dynasties. During the time of independence from the British in 1947 there were some princely states in the province, most notable among them being Bhopal, Gwalior, Rewa and Indore.
However, with everything in Madhya Pradesh being spread out, it’s hard to cover it all in one go. So, during my maiden visit, I focused on two main cities on the western side – the political capital, Bhopal and the commercial hub, Indore.

Often touted as the City of Lakes, Bhopal was founded by Hindu Raja Bhoj in the 11th century alongside many artificial waterways. During the Mughal era, Afghan General Dost Mohammed Khan further developed the city. He and future rulers of the state, four of whom were women, studded the cityscape with impressive buildings and squares, imposing mosques and monuments, many of which still exist today in the older part of the city.

Most admired is the Taj-ul-Masjid, one of India’s largest Islamic shrines. Also known as the Jama Masjid, the mosque is famous for its gold-sheathed domes and royal enclaves – Shaukat Mahal, Sadar Manzil and Gohar Mahal – all located around the Chowk, where it’s still an exhilarating experience to get lost in its numerous galis lined with shops and eateries.
Recognised as one of India’s cleanest cities, Bhopal today presents a good mix of old and new with regal fragrances still dominating the air.

A good way to get soaked by this stately effervescence is to stay at the plush Jehan Numa Palace Hotel, where noble heritage can be discovered in the fine tinges of its white washed building, culture, cuisine and hospitality.

Bhopal boasts of a number elegant museums. Most interesting is the Tribal Museum where some paintings draws similarities in style with Australian Aboriginal art, adding fuel to the belief that perhaps, millions of years ago, India and Australia were connected.

Near Bhopal there are many iconic sites, like the Raja Bhoj-built Shiva Temple at Bhojpur, and the hill fortress at Raisen. Two of the most tourist frequented sites are the Buddhist monuments at Sanchi and the prehistoric cave art at Bhimbetka, both listed by UNESCO as World Heritage sites.
Crowning a hilltop location 46km away from Bhopal, Sanchi is the largest complex of Buddhist remains in India. The ruins of stupas, temples and monasteries, which were built between 3rd century BC and 12th century AD, recall the time when Buddhism spread across the land, Sanchi then teeming with monks and pilgrims. Most famous here is the Great Stupa founded by King Ashoka. The four gateways to this massive mound are carved in a variety of artworks portraying Buddhist legends.

If Bhopal, with its natural setting, appeals as poetic, Indore, located 192km away, strikes as the prose version of an urban congregation. It’s the commercial nucleus of the region, often referred to as the ‘Second Mumbai’. Famous for jalebi and poha at breakfast, the settlement grew into prosperity in the mid-18th century under the Holkar dynasty.

Their seven-storied residence called Rajwada Palace is the main tourist attraction of the city. A light and sound show there in the evening, with maestro Amitabh Bachchan’s voice as narrator, brings alive the history of the Holkars, particularly of Queen Ahilya Bai who ruled the region for over three decades.

Indore is a convenient base to explore many enchanting places close by – Ujjain and Mandu being the most significant.

Located 55km away from Indore, on the banks of River Sipra, the ancient city of Ujjain teems with history, legends and myths. King Ashoka was the Governor of Ujjain before assuming throne. During the time of King Vikramaditya of the Gupta Empire, the city became an important cultural and administrative epicentre. Legendary Sanskrit poet Kalidasa, who wrote immortal epics like Shakuntala and Meghdoot, was believed to be living in Ujjain at the time.
Pious Hindus believe it is one of the four blessed places that received a falling drop of nectar from the gods. Legend says Lord Krishna received his early education here and Sati’s elbow fell here during Lord Shiva’s destructive dance performance.
The area is powdered with countless temples, most crowded being the Mahakeleshwara Temple, fabled for being one of twelve sites of a jyotirlinga. A couple of hours queuing is normal to get inside the sanctum.
Another shrine of interest is the Kala Bhairava Temple, where whiskey, rum or any other alcoholic drink is offered to the deity as part of a tantric ritual.

While Ujjain is all about religious myths and temples, Mandu offers legends of love and architectural splendors. Located on an elevated plateau 100km away from Indore, Mandu is an ancient settlement where discerning travelers drop in to see an exceptional ensemble of palaces, mosques, temples and monuments, many standing as an emblem of fabled love affair between poet king Baz Bahadur and her consort Rani Roopmati. Guides tell many stories about their romance when visiting Baz Bahadur Palace and the Roopmati Pavilion, tucked up on the crest of an adjacent hill from where River Narmada was visible. It’s said Roopmati touched food only after paying homage to the river, so the location of her quarter was ideal.
Tucked away at an elevation of 2000 feet, during its heyday Mandu was the fort capital of Hindu Malwa kings and Muslim sultans. Even the mighty Mughals laid their foot prints here.

Each of Mandu’s structures is an architectural gem; like the 15th century-built Jama Masjid, designed with a mosque in Damascus in mind, and Hoshang Shah’s Tomb, India’s first marble monument which inspired builders of the wondrous Taj Mahal years later.
Out of all, the jewel in the crown is the two storied, 120m long Jahaz Mahal or the ship palace which was built between two lakes by a Muslim sultan for his numerous queens and consorts. With its airy roof, open pavilions and terraces, balconies overhanging the water and tiny domes dominating the skyline, it’s an imaginative recreation of a pleasure craft. Visitors to Mandu wonder why this architectural symphony is not drawing the attention of UNESCO for a World Heritage listing.

There are many more exciting destinations in Madhya Pradesh, from Gwalior Fort and the Khajuraho Temples to exciting wildlife at national parks in Kanha and Bandhavgarh. I gave them a miss this time around and left the region with a promise to return to explore more charms – sooner rather than later.
FACT FILE
Getting There: Air India (www.airindia.in) have direct flights from Sydney and Melbourne to Delhi from where Madhya Pradesh is well connected by rail, road and air.
Stay: In Bhopal, the 100 room Jehan Numa Palace Hotel (www.jehannuma.com) is the perfect venue to absorb the city’s rich cultural and royal heritage, while in Indore, the Radisson Blu (www.radissonblu.com) offers contemporary style and grandeur. In addition there are decent hotels run by Madhya Pradesh Tourism in Bhopal, Sanchi, Bhimbetka, Ujjain, and Mandu.
Tour Operator: Indian Holiday can assist with all travel arrangements in India (www.indianholiday.com)
More Info: Madhya Pradesh Tourism (www.mptourism.com)