The buzz in Bengaluru 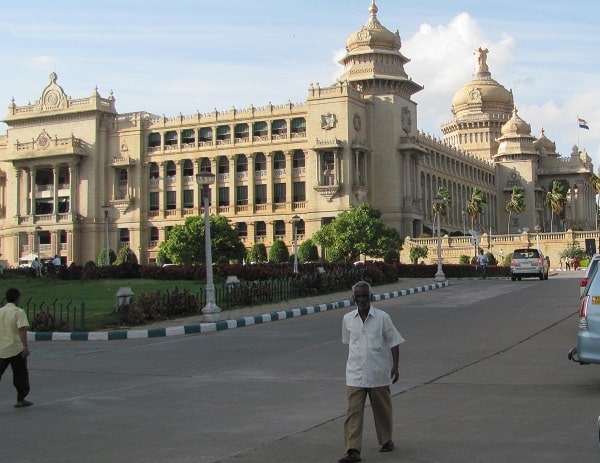 As the capital of the State of Karnataka and India’s information technology hub, Bengaluru has much to offer. Studded with parks and gardens, with wide tree lined avenues, imposing palaces, churches, temples and mosques, stylish neighbourhoods, a remarkably diverse restaurant scene and a pleasant temperate climate, the city is located on the Deccan Plateau, nearly 1000 metres above sea level.
But Bengaluru is not without its frustrations. I had downloaded the metro map and met two visitors from Mumbai equally perplexed for there was no station before us, just a dusty pile of rubble. Completion has stalled much to the consternation of locals. Instead we fortuitously spotted and opted for the convenient hop on hop off bus that stopped at many sights.

Bengaluru was founded by Kempe Gowda in the early 16th century and became an important fortress city two centuries later under the rule of Hyder Ali and his son Tipu Sultan.

The old part of the city, with narrow busy streets adjacent to the bus and railway stations, is known as Chickpet. In the vicinity you’ll find the Bull Temple, built in the 16th-century Dravidian style, that contains a huge granite monolith of Nandi adorned with garlands of jasmine. It is one of Bengaluru’s most atmospheric temples. Nearby, the exquisite Tipu Sultan’s Summer Palace completed in 1791 is a two storey structure, notable for its teak pillars and elaborate ornamental frescoes. The Fort dating from 1761 provides a peaceful retreat, with a manicured lawn and stone pink walls. The massive 18th century Jamia Masjid stands next to KR Market and the dense grid of commercial streets that surround it. Weave your way around this bustling market past fresh produce, piles of vibrant dyes, heady spices and copperware.

Spread over 96 hectares, the expansive Lalbagh Botanical Gardens were laid out in 1790 by the German Horticulturalist Gustav Krumbiegel for Hyder Ali, with lakes, fountains, pavilions and symmetrical flower beds and claims to have the world’s most diverse species of plants with over 1800 represented. Opposite is the atmospheric Mavalli Tiffin Rooms, a classic Brahmin vegetarian restaurant that dates back to 1924 when three cooks, all brothers, sold coffee and idlis. The tradition continues with the third generation offering nothing short of a culinary revelation with a set Thali lunch comprising fourteen tantalising dishes served with gusto by waiters to accompany rice, puris, pappadams and locally made grape juice.

Several kilometres away in the vicinity of MG Road, you’ll find Cubbon Park, 120 hectares laid out in 1864 with giant Banyan trees and numerous flowering plants surrounded by imposing government buildings including the State Library, High Court, Museum and the colossal neo-Dravidian-style Vidhana Soudha which houses the state Legislature and Secretariat.
Built in 1887, Bangalore Palace, the private residence of the Wodeyars, the royal dynasty that ruled the Kingdom of Mysore for much of the period between 1399- 1947 preserves a slice of the pomp and pageantry associated with a bygone era of royal splendour. An audio guide provides a detailed explanation of the building, designed to resemble Windsor Castle and you can marvel at the lavish interiors and galleries featuring hunting trophies and historic portraits and photographs. It was while peering over the balustrade that I had a chance encounter with the curator who had lived in England and Perth for many years before returning to India.

From here I went to Koshys, a dining institution oozing with atmosphere with dated decor and whirring creaky fans before darting across the street to KC Das for exquisite sweets and to the Bangalore Club where Sir Winston Churchill left an unsettled bill of 13 pounds.
Shops are clustered along Brigade Road, Commercial Road and the main thoroughfare MG Road and at St Mark’s Cathedral I turned down to Church Street. There on the corner was a funky restaurant/bar called Social that looked far too inviting to bypass, with customers relaxing on comfy retro couches. The wait staff produced magic tricks making molecular cocktails from a frothing aqua blue concoction to the intriguingly named Deconstructed Moscow Mule and the music was lively.

For my last night I checked into the legendary Taj West End and entered a world of refined luxury and gracious staff at every turn. I joined a history and garden tour exploring the vast gardens, enjoyed a superb Indian meal and had breakfast under an ancient rain tree. Exceptional was that I had mentioned on arrival that I had been exploring all day. When I retired to my room, I found a note left by the Executive Housekeeper to advise that a large brass pot of soothing bath salts sprinkled with flower petals would relieve my tired feet with candles then lit on the balcony to show a chalk painting rangoli to symbolise an auspicious journey. Before departing, I treated myself to High Tea on the lawn opting for the Indian tiered selection of savoury and sweet treats served with aromatic Masala Tea.

Had I stayed here for the duration of my visit to Bengaluru, I may not have ventured beyond its gates. One of the guests, finding it so agreeable, decided to move in and has called her suite home for 36 years.
While Bengaluru may be India’s Silicon Valley, a switched on city with glass and steel high rises that has been energised by the information age and colonised by entrepreneurs, it is the historic parts of the city, the tree lined streets and gardens and remarkable cuisine that I will remember long after the banners of Google, Microsoft and Yahoo have faded from my memory.

Getting there
Several airlines fly from Australia to Bengaluru. Beacon Holidays nabbed a great fare and booked my flights. Tel: 1800667791 www.beaconholidays.com.au.
Getting around
Arrange a transfer from the airport to your hotel as the airport bus only skirts the city. Public buses are inexpensive. Recommended is the hop on hop off bus for sightseeing www.mybmtc.com. Get indicative prices for auto-rickshaws (your hotel can assist) before you set off, insist on the meter and have your bearings.
Where to stay
Justa The Residence MG Road has reasonably priced comfortable rooms and friendly staff, in a good location near Trinity Metro with a great Udipi restaurant opposite. Visit www.justahotels.com
Started as an English-run boarding house in 1887, the luxurious Taj West End is set in a splendid 22-acre garden that justifiably has won many horticultural awards. The rooms are spacious and beautiful. www.tajhotels.com
Where to eat
Bengaluru is renowned for the offering of food including dosai, idli, uppittu and the varieties of fruit. For an exceptional vegetarian Thali, head for the Mavalli Tiffin Rooms, 14 Lalbagh Road and arrive at 12.30 as it soon develops a queue.  www.mavallitiffinrooms.com
A great place to meet people or relax is at Social cnr Church and Museum streets.
Shopping
Head for 1 MG Road an upscale shopping centre with a supermarket and retail outlets including the colourful clothing and homewares of Fabindia.
Insider tip
Dass India Money Changer, 157 Brigade Road is recommended.
Further Information
Contact India Tourism Level 5, Glasshouse Shopping Complex, 135 King Street, Sydney 02 9221-9555 www.incredibleindia.org