South Korea’s principal cities are a blend of the traditional and the modern, with kimchi for flavour 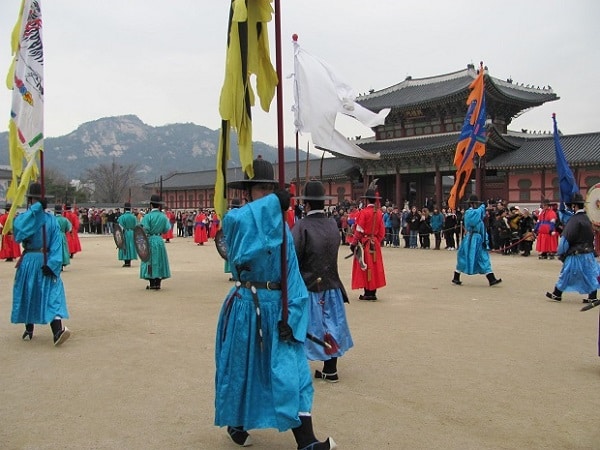 As is customary in South Korea, I deposited my shoes at the restaurant’s entrance, showed my sign of ‘Naneun chaesikjuuijaimnida’ or ‘vegetarian’ in Korean, and was ushered away from the raw beef piled high on tables ready to be stir fried, into a small room with sliding wooden doors. I settled onto pillows on the floor around a low table that was soon covered with small plates. There was soft tofu, glass noodles mixed with sesame oil, barley rice, sweet potato soup, kimchi and a large pot of green tea. Kimchi is a traditional dish made of cabbage, cucumber and radish that is popular throughout Korea for its delicious flavour and health benefits. The portions were replenished and enjoyed.
Hastily rebuilt after the Korean War, Seoul is a city of districts and neighbourhoods that house over 10 million people. The city is shedding its utilitarian image, and now has the potential to become one of Asia’s most glittering metropolises. A city of contrasts of old and new, the city centre is well planned, spotless and spiffed up with numerous recent examples of striking sleek contemporary architecture, including the City Hall with a cresting wave facade of dark glass. With attention given to public amenities, parklands have been created such as the Cheonggyecheon or ‘stream’, with office workers taking a stroll during their lunch break. And there are many vibrant neighbourhoods showcasing a booming art scene, the number of art galleries with quirky art on display is impressive, there are fashionable stores and a thriving youth culture.
After arriving at the port city of Incheon, I travelled to the city centre, heading for one of many grand palaces dating back to Seoul’s feudal past. The city centre is bounded by five grand palaces that date back to the Joseon dynasty which ruled Korea from 1392-1910, founded by King Taejo. Gyeongbokgung Palace built in 1395, was the main royal palace for 500 years. Reconstructed in 1872 at enormous cost, it almost bankrupted the government of the time. Monumental halls and private quarters of the royal family are splendid, but the Changing of the Guards ceremony is spectacular.  Within the grounds, the National Folk Museum of Korea showcases examples of Korean life. Nearby is Cheongwadae known as the ‘Blue House’, home to the Korean President, and so called because of its blue roof tiles. Changdeokgung Palace nearby was built in 1405 with the last royal family member living here until her death in 1989.
At Namdaemun market, with over 10,000 shops selling clothing, textiles, household utensils and food radiating out along alleyways from the centre, not getting lost was a challenge. I left clutching an assortment of souvenirs. The largest market in Korea, it was established in 1414 near large city gates built of stone. Somehow you get by with barely anyone understanding English, but with a willingness to communicate. Signs around the market read ‘Good for browing’ (sic) and ‘Everything under the sun’.
My favourite place was the utterly charming Insa-dong, a street with a multitude of small quirky boutiques, cafés, art galleries showcasing contemporary art and photography, traditional teahouses and restaurants. Street vendors were selling dragon’s beard, fine strands of honey, pine nuts, chestnuts, peanuts and cornstarch. There were also some quirky museums including one dedicated to handbags, another to jewellery and one intriguingly, to chicken art. There were underground shopping malls and business precincts, with Samsung dominating. And many hairdressers and salons for manicured coloured nails.
For those who equate Seoul with a sprawling metropolis of skyscrapers and malls, the intimate scale of Samcheong-dong is a pleasant surprise. Much of this neighbourhood is a hilltop maze of hanoks or small traditional timber courtyard houses, some now operating as galleries, cafés and bars.
As I travelled back to the port, the bus passed row upon row of identical rectangular high-rise apartment blocks devoid of any character. The economic revolution that has turned South Korea into the 11th largest economy in the world, also replaced many of the traditional hanoks that were once commonplace.
I next travelled to South Korea’s second largest city and the 5th largest container port in the world, Busan. Here, the lively Jagalchi Fish Market that began as a collection of fishing villages, has no nonsense women selling the freshest of fish. Views from Yongkusan Park of the city skyline were spectacular, though the highlight was Beomeosa Temple dating from AD678, set against a mountain setting requiring a steep uphill hike. Mountains cover 70% of the landmass, making Korea one of the most mountainous regions in the world. South Korea may be among the most wired and densely populated countries in the world, but its first religion many centuries ago before the arrival of Christianity and Buddhism, was based on the worship of mountain spirits. Here amongst temple buildings wedged into the rocky terrain, I was treated to expansive views of the surrounding forest of maple and birch, towards the sea beyond. A young monk in grey robes beat a drum larger than he was, the deep sound echoing far beyond. I ascended to a hall filled with golden statues of Buddha, and met a college student who was staying at the temple overnight to learn more about Korean culture.
On my return home, as I was having my hair cut at the Bondi Junction salon managed by Soon from Seoul, I mentioned my visit. She slowed down the snips of her scissors that always performs at top speed and paused. “But did you try kimchi?” she asked.

Travel notebook
Getting there
Asiana Airlines has direct flights from Australia, with several Asian airlines including Air Asia, Cathay and JAL having one stop en route.
Getting around
Extremely tourist friendly, the subway system is colour coded, efficient, inexpensive and easy to navigate. Hop on hop off tourist shuttle buses go to places of interest. Busan is just over 2 hours from Seoul by fast train.
Where to stay
The 185-room Park Hyatt Seoul T: 82-2-2016-1234 W: seoul.park.hyatt.com occupies a glass and steel building in the central Gangnam district. For a luxury stay in a traditional house, the Rakkojae Traditional Korean House (Hanok) is recommended W: www.rkj.co.kr  In Busan, Haeundae Grand Hotel, Haeundae Beach is 5 star www.haeundaegrandhotel.com, while Apple Guest House is a good budget choice. W: www.appleguest.com. There are also many affordable traditional guest houses, youth hostels, home stays and temple stays. For a comprehensive listing go to www.visitkorea.or.kr
Must tries
Kimchi is a traditional fermented side dish made of cabbage and vegetables, thought to have curative health properties.
Further information
Korea Tourism Organization, Level 18, Australia Square Building, 264 George Street, Sydney Ph: 02-9252-4147 Website: www.visitkorea.or.kr has maps, brochures and helpful staff. There are many Tourist Information Centres in Seoul and Busan with roving staff providing assistance in English at tourist venues. Walking tours are provided by volunteers. A 24/7 phone interpreting service operates and information can be downloaded onto your i-phone. Currency is the Won, with 1AUD = approx 1,000 Won.