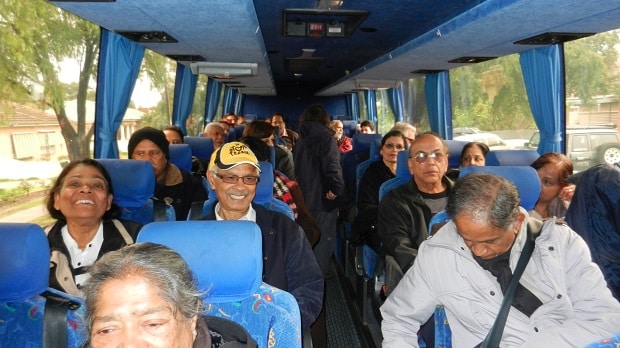 Reading Time: 4 minutesA touch of wine, an enjoyable Indian lunch and numerous strolls were to be had by the Adelaide seniors

It was a bleak morning with a grey sky. Drizzle and mist left over from the night before blanketed the horizon. As we began to arrive there were anxious looks up into the sky to see if there was a chance of the weather clearing up. A day trip to the famous wine growing region of the Barossa Valley had been organised. A coach had been hired, commitments made and there was never a doubt that fun was to be had. There was plenty to look forward to and the weather was soon forgotten in the midst of the chatter of friends.

It was nice sitting high up getting a different perspective of the scenery all around. As the coach cruised along in no time at all and we were passing Barossa Fruit Wines, who are one of the few wineries that make wine, but not from grapes. It was their rose petal wine that intrigued me, which conjured up romantic images of a bygone age.

Along the route to the Barossa Valley is the Whispering Wall. This wall, or rather; dam, is in fact, a retaining wall of the Barossa Reservoir and was built between 1899 and 1903. The construction was a very advanced design for its day and received worldwide attention. Its arced shape helps to disperse the pressure of water on the wall but also gives it the unique ability to be able to transport a softly spoken word from one end of the wall to the other – a distance of some 100m. What a spot for a coffee break! Out in the bush amongst trees, looking over the serene lake, while walking along the curve of the dam, surely was something to remember. Many tried to test the acoustic credentials of the wall; I suspect with varying degrees of success.

We hardly had time to regret not having stopped for a tasting earlier when the coach pulled in to the Kies winery. Nice gardens surrounded a busy little cellar door with a polished dark wood bar and the walls covered with assorted memorabilia. For some, it was a stroll around the gardens and for others, there were wines to taste, compare and enjoy. For me it was the soft reds and mild rieslings that won out. We left satisfied, with some of us carrying bottles to take back home.

We were now travelling into the heart of the Barossa Valley with its undulating hills and fields covered with vines of autumn leaves. Yellows, rusts and reds predominated with the leaves strung out in straight lines with green tracts in-between the trellises. This was a beautiful sight. Liquid amber trees had turned a deep red and set against the grey skies, simply magnified the effect. Every now and again there were fields with new-born baby lambs frolicking around. Autumn is the season for the new lambs and then they have the winter to gather their strength before facing the sometimes harsh summer weather ahead.

We drove past many wineries, some of which are household names. One name that is known world-wide is Jacobs Creek and that was our next stop. There was not so much as a cellar door here, but rather a wine centre. A modern glass and chrome building with tasting areas, restaurant and conference facilities. Once again the group split into those for tasting or those for strolling. As we were boarding the coach we could see shafts of the sun’s rays lighting their way through the clouds. With the day brightening, the colours of the countryside took on their natural vibrancy.

It was getting close to lunch and the coach wound its way through Tanunda and onto Nooriutpa to our lunch venue at the Barossa Indian Cuisine restaurant. With the rapid expansion of Indian migration into South Australia soon there will be Indian cuisine available in every corner of the state. Such is the popularity of our food. Lassi to start, gulab jaamans to finish and the comfort of simple vegetarian food made for a good familiar meal.

A regular and much loved feature of the Adelaide Seniors meetings is a quiz prepared and conducted by Rajan. In the quiz on this trip he used questions that he has used many times previously for which we have been given answers in the past. So it was a cause for great hilarity that we could still not get the answers right. I suppose, as a group, we were acting our age.

It really was necessary to walk around the town for a bit, to help the digestion before boarding the bus again for the afternoon’s leg of the journey. The soothing gentle movement of the bus found many eyes closing. Next was the pretty town of Angaston, a base of much of South Australia’s heritage. In Springton we saw The Herbig Family Tree. Not much is left of this large, hollow, red gum reputed to be over 300 years old. In 1855 Freidreich Herbig and his family arrived here and made the tree his home. The Herbig descendants still have annual reunions at the site.

A final stop in the Adelaide Hills for a warming cup of tea and Mother’s Day cake at Woodside and then it was back to the IASSA hall where a weary but satisfied bunch of seniors, very much feeling their age, said their goodbyes. It had been a long day, but in our senior years when day follows day, perhaps this one will stand out as one to remember and recall with pleasure.