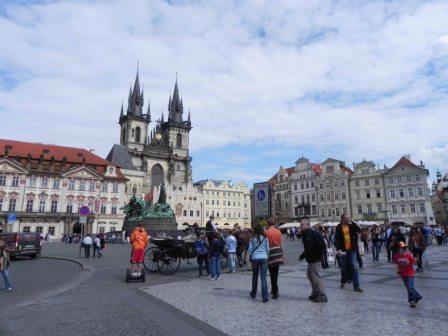 Reading Time: 5 minutesThis city of a thousand spires has been luring visitors to its historical majesty for centuries, writes SANDIP HOR

My first connection with anything Czech is through shoes. Sounds bizarre, but it’s true. Like many others in India, I grew up wearing Bata shoes, a world-renowned footwear brand that was established in 1894 by Tomas Bata in Czechoslovakia, and later expanded by his son Tomas Jan Bata to all corners of the world, including the subcontinent.

So as expected, I am overwhelmed with that typical sense of familiarity when standing in front of the multi-floored Bata showroom on the famous Wenseslas Square in Prague, currently rated as one of the most sought-after tourist destinations in Europe.

Edging on the shores of Vltava River with rolling hills on both sides, this metropolis is now home to two million people, and has been the political, cultural and economic hub of central Europe with its history glossed over with glory during most its 1100 years of existence.

Traditionally home to royals and presidents, this World Heritage listed site comprising of bridges, cathedrals, gold-tipped towers and church domes all adorned with over thousand spires, is one of the most historically enriched venues in the world. The city was founded in the 9th century during the Romanesque period, and flourished immensely through subsequent Renaissance and Gothic ages when it became the capital of the Holy Roman Empire. Later under the Habsburg Monarchy, Prague continued its golden journey as an important seat of the Austro-Hungarian Empire and remained so for 400 years till end of World War I in 1918, when became the capital of Czechoslovakia Republic. After enjoying over two decades of independence, it fell to the Nazis during World War II and at the end of the war in 1945, the city came under Soviet influence till the ‘Velvet Revolution’ in 1989 when the Berlin Wall fell, triggering an end to communist dominance in many European countries. The nation was split into two in 1993 giving birth to Slovakia, but Prague remained the capital city of the new Czech Republic.

Guidebooks recommend seeing the momentous city by walking along its cobblestone streets, so I join my omniscient guide Jindra for an epical journey, history joining us as our companion.

Unlike many other European cities, Prague was untouched by the carnage of two world wars, leaving its architectural silhouette almost as intact as it was built several centuries before. Displaying a style of the eras, the cityscape I travel past is so engaging, that almost all of it demands to be photographed.

Like most maiden visitors, we first land at the 9th century built Prague Castle, a national monument symbolising the long evolution of Czech history. We go past the 12th century founded Strahov Monastery and the 17th century built Loreto Chapel before reaching the hilltop citadel, spread over an area of more than 45 hectares around three enormous courtyards, and comprising of impressive palaces, churches, chapels, halls and towers from the Romanesque and Gothic, to the Renaissance additions of the last Hapsburg emperor. The visual experience on the senses is similar to going through a textbook on European history.

The jewel of the castle quarter is St Vitus’ Cathedral, a major landmark of the city which took almost 500 years to be completed. Visitors are allowed to climb to the top of its soaring towers for an awe-inspiring vista of Prague unfolding below. We give it a miss due to time constraints, but no regrets as Jindra takes us to many other vantage points in the palace gardens and along the riverfront from where the city views are equally mesmerising.

Czechs love their food and beer, so we stop at a wayside tavern to be gastronomically fulfilled, the Czech way. I order Budweiser beer and ‘svickova’ – a meat dish served with cream sauce and potato dumplings, and while sampling them Jindra adds to my knowledge of history by briefing me about Emperor Charles IV, the most significant ruler of the land during the Middle Ages who built a stone viaduct across the river, famously known as the Charles Bridge.

We cross this 520m long pedestrian thoroughfare flanked on both sides with thirty decorative statues of saints, following the same historic route traversed by the Czech kings while journeying from the royal quarters to the Old Town of Prague. This part of the city was a market place during the 11th century, but gained the status of a town two centuries later when palaces, churches, towers and administrative buildings sprang up around the square, said to be among the most impressive in the whole of Europe.

An interesting feature of the Old Town is its growth in a natural, rather than planned manner. We come across streets breaking off at absurd angles with bends and twists unexpectedly greeting walkers. Luckily most of the area has ‘no-car’ restrictions, so it’s safe for strolling visitors who are usually so engrossed by the architectural scenery that the dangers of vehicular traffic are forgotten.

The structure that keeps drawing the most attention on the hour is the Old Town Hall whose Astronomical Clock is like a symbol of Prague, as Big Ben is to London. Installed in the 15th century, the crowd-pulling feature of the clock is the procession of twelve apostles at the striking of every hour.

Other architectural marvels in and around the square are by no means less significant; in fact all of them compete for attention. However, the Church of our Lady before Tyn, the Gothic Towers of which peer over the parade of Old Town houses; the Powder Gate, standing as silent witness of history since the 11th century; and the Municipal House, Prague’s most prominent Art Nouveau building dot the site of this former royal palace as an upmarket auditorium for concerts and operas, creating an immediate impression on visitors.

One of the most striking areas of the Old Town is the old Jewish quarter which is ranked among the most valuable Jewish historical monuments on the planet. The synagogue that dates back from the 13th century is the oldest preserved Jewish shrine in Europe. The adjacent cemetery draws attention to indicate just how several thousand tombstones were placed in a very small area.

After a few days of a hands-on encounter with an array of sights and scenes, I leave Prague with a notion that its charisma is not only by the countless attractions it offers, but also through its vibrant character and bustling ambiance that has kept enthusing visitors from Romanic times to date.

Getting there A great way to travel to Europe is by flying with Singapore Airlines (www.singaporeair.com) which has 103 weekly flights to 14 destinations in Europe, and then travelling intercity by train. This arrangement provides the flexibility of arriving in one city and departing from another, in between criss-crossing the continent by train bypassing queues, delays, security checks, etc., associated with airports. Prague is only few hours away from major cities like Vienna, Munich, Berlin and Budapest. Rail Europe (www.raileurope.com.au) connects travellers with country railways and offers Eurail Passes, which is a perfect solution for multi-country travel spanning over a period of time.

Cuisine Visit a Czech restaurant to try the delicious bramborová polévka (potato soup) and meat dishes with dumplings. There are also several multi cuisine restaurants including Indian – Indian Jewel Restaurant (www.indianjewel.cz), in the Old Town being most popular with locals and tourists for a curry taste.