Peace on the Phi Phi islands 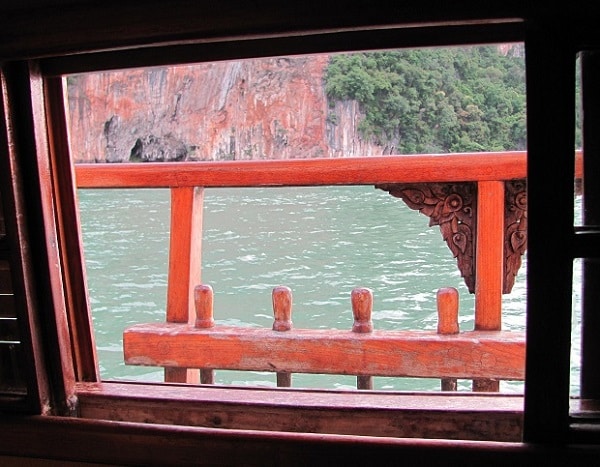 When novels or films dramatically evoke the landscape in which they are set, we can be inspired to go there. To retrace the steps of Leonardo diCaprio in The Beach, filmed on the island of Phi Phi Leh, was what I wished to do. I could travel with hundreds of tourists who arrive by ferry, or take an eminently more pleasant scenic route, exploring the islands of southern Thailand onboard the Suwan Macha, a beautiful wooden schooner rigged with the sails of a traditional junk.
My eight fellow passengers were French from the Reunion islands. A mix of sophistication and exotic elegance, surely. Shown to my cabin, several pairs of tiny legs dangled over my window and then the faces of two inquisitive girls peered at me. Five young children, all under 10! Elliot, Basil, Louis and the two impish girls, carefree, barefoot and agile as monkeys. What delightful company they made, so curious about all that we saw.
We departed with the course set for the spectacular karst topography of Phang Nga Bay, a bizarre landscape in which limestone is weathered and moulded into unimaginably odd shapes. Massive sheer cliffs coloured white, grey and black, rose vertically from the intense turquoise water.  Warrens of caves and patches of jungle clung suspended in crevices on the sides of cliffs. On a long-tail boat we explored coves with stalactite formations and passed cliffs where men climb twined bamboo poles hundreds of metres high to collect the nests of swiftlets prized by the local Chinese, a culinary delicacy for bird’s nest soup.  As the sun set bringing the oranges and pinks of a tropical night and gentle waves slapped rhythmically against the boat, all worrisome thoughts were pushed far away.
Next morning we visited a Sea Gypsy Village, passing women selling trinkets and children at play. At James Bond Island, depicted in the movie The Man with the Golden Gun, we were outnumbered by boatloads of Chinese tourists. We left for a small deserted island bordered by white sand beaches and went snorkelling in clear water, the coral sadly showing signs of stress.
As we approached the mainland near Krabi, the darkness of nightfall was punctuated by bright lights pointing down into the water belonging to the local fishing fleet making its way out into the night.  The trip had taken several hours with the skipper appearing to hit the engine throttle hard. We had encountered large waves, it was the great wide open water and the children squealed with joy.
We put the anchor down near a small island for shelter and after a windy night, headed for Phi Phi Don, the larger of the two Phi Phi islands with cross currents causing the boat to rock from side to side, up and down. Relieved, we arrived at a beautiful white sandy bay with Chinese tourists splashing about in the shallow water. Long-tail boats passed by conveying tourists, narrow wooden vessels with an eggbeater propeller welded onto a long swinging shaft. I walked over the hill to reach Long beach, a beautiful deserted stretch of beach with several resort hotels tucked in amongst groves of palms and pandanas. Further along at Ton Sai Bay, the narrow maze of alleyways struggles to cope. With bars displaying fairy lights suggestive of noisy evenings, restaurants, t-shirt and sarong vendors, hair braiders and tattoo artists all squeezed in with crowds of skimpily clothed backpackers, all conspired to turn me back to the relative solitude of the boat.
One of our crew was missing, but found soon afterwards with a swollen foot, a casualty of having trodden on a sea urchin. We set off for Phi Phi Leh, a small uninhabited island of white sandy beaches that juts out from the horizon, its craggy peaks and black cliffs rising dramatically. But choosing to travel during monsoon season has its risks. Raindrops as big as hens’ eggs began to fall, drenching us all. “Isn’t that Phi Phi Leh that we’re passing, the reason why we’ve come here?” I asked. “Come on now all together, let’s wish we can go there!” But before the skipper could answer, a loud putt, putt, fizz noise from the engine was a sign of foreboding. As the waves grew in size, crashing and lapping at the base of the cliffs, the sky turned black and the skipper sped off to get a mechanic.
The engine still would not start. The skipper announced that we would go in the rubber dinghy to Phi Phi Leh. And so it was that we landed rather excitedly on the very same beach made famous by the movie The Beach. Led to a thatched hut, we were given rice and curry by the resident ranger and his family, though as I was so seasick, I lay on the sand without moving. The storm intensified, we ran for shelter, ending up at the ranger’s hut. Exhausted, we fell asleep.  Next morning the skipper returned, and by rubber dinghy we were taken to a diving boat and back to Phi Phi Don for our ferry ride back to Phuket.
After the ferry departed, I turned to take one last look at Phi Phi Leh. The rain had cleared and a spectacular rainbow appeared above it. The islands of Thailand are the stuff of castaway fantasies. Wishes do come true, after all!

Travel notebook
Getting there
Jetstar (direct), Thai Airways International, Singapore Airlines, Malaysia Airlines and Air Asia fly to Phuket.
Getting around
It’s a drive across the island to the marina and a ferry boat ride. Given the ferry takes 2 hours, it is too gruelling to attempt in one day. To explore the islands of Phi Phi, an overnight stay or more is required.
One of the benefits of cruising onboard the Suwan Macha is that transfers from your Phuket hotel are included as well as all meals, kayaks, snorkelling gear and excursions.  The boat visits islands seen by few tourists. Guest cabins for single and double occupancy are compact with shared bathroom facilities. An adventure rather than luxury experience. E: info@asian-oasis.com W: www.asian-oasis.com
Where to stay
For exploring the islands including Phi Phi, you’ll need pre and post accommodation stays on Phuket. I stayed at the newly opened Pullman Phuket Arcadia, overlooking the Andaman Sea and convenient to the airport. E: H7488-RE@Accor.com  W: www.pullmanphuketarcadia.com
The Beach Resort on Long beach at Phi Phi Don has helpful staff and nice rooms. E: resvn@phiphithebeach.com W: www.phiphithebeach.com
Insider’s tip
Contact the Tourism Authority of Thailand at Level 20, 56 Pitt Street, Sydney T: (02) 9247-7549 for brochures and maps. I’d recommend avoiding the monsoon season, November – April is high season, but the best months to go.