Pack your bags for Penang! 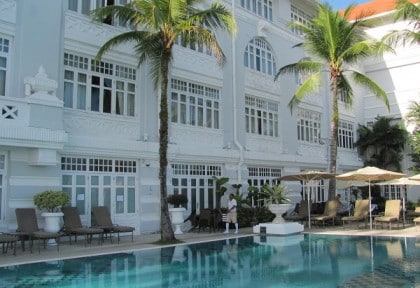 My impressions of George Town, on the island of Penang, remain unchanged since my first visit with trishaws, joss sticks burning, and hawker stalls with sizzling woks. An eclectic mixture of architectural styles, from rows of candy coloured shop houses, Buddhist and Hindu temples, mosques, colonial churches and civic buildings, reflect a melting pot of cultural influences. The locals are diverse; of Malay, Chinese, Arab, Indian, Burmese, Indonesian and Armenian heritages, a legacy of years as a trading port.


Before the arrival of Captain Francis Light, Penang was ruled by the Sultan of Kedah who agreed to lease it to the British in return for military protection. In 1786, Captain Light formally took possession for the British East India Company and Penang grew in importance. In 1819, Sir Stamford Raffles founded the British colony in Singapore and in 1826 Penang, Melaka and Singapore were incorporated into the Straits Settlements. By the end of the 19th century Penang prospered from the lucrative trade of tin, rubber and spices before misfortune hit including the great depression, Japanese occupation during World War II and a slow decline that saw many of Georgetown’s shop houses on the verge of collapse.
But then, in 2008 George Town was granted World Heritage status and underwent a dramatic transformation. Shop houses were restored and converted to art galleries, boutique hotels and cafes by locals passionate about preserving their past.

To fully appreciate all the gems that the city offers, you will need several days and a good map. Perhaps the most significant site is Khoo Kongsi, the most important Chinese clan house in Malaysia, with elaborate carved and gilded decorations. The complex boasts a magnificent hall embellished with intricate carvings and richly ornamented beams – not a single nail was used in its construction!
Other must-sees include the majestic Kapitan Keling Mosque, the island’s oldest mosque, built in 1801, and the smaller Masjid Melayu Lebuh Acheh dating to 1808. Kong Hock Keong temple, the first temple built by Penang’s early Chinese settlers, is dedicated to the Goddess of Mercy, its courtyard always filled with joss sticks and wafts of burning incense.

The Sri Mahamariamman Temple, at Lebuh Queen, dates back to 1801 and is the oldest Hindu temple in Penang. It was built for the Tamil community of traders and stevedores who originated from southern India, with banana leaf restaurants nearby along the narrow streets of Little India. On Leith Street is the Bengali Mosque, founded in 1803 for farmers brought from Kolkata by the East India Company to encourage agricultural enterprise on the island.
To appreciate the architecture of the Chinese shop houses, head for the area around Armenian and Acheh Streets. To view the interiors, visit the Edelweiss Cafe with a small museum, or China House, a row of shop houses turned into a gallery, shops, bar and restaurants. On a more lavish scale the Pinang Peranakan Mansion is a restored 1894 mansion filled with antiques, and the Cheong Fatt Tze Mansion is a striking indigo blue mansion built in the 1890s by a rags to riches Chinese businessman, with ornate cast-iron columns and art nouveau stained glass. The Syed Alatas Mansion, built by a wealthy Achenese businessman in 1860, combines Indian, Malay and European influences.
For an introduction to the culture and social history of Penang, the Penang Museum offers informative exhibits. In the vicinity you will also see the Queen Victoria Memorial Clock Tower, commissioned in 1897. Nearby are several noteworthy buildings including St. George’s Church, dating from 1818, the oldest Anglican Church in South East Asia, as well as Fort Cornwallis, the imposing City Hall, Town Hall and State Assembly Building.

One of the more fascinating sights is the Weld Quay Clan Piers, dating back to the 19th century. Along a long wooden boardwalk live the descendants of the many Chinese clans that settled here.
After long days of exploring I returned to the Eastern and Oriental Hotel, opened in 1884 and one of three legendary hotels owned by the Armenian Sarkie brothers, which included the Raffles in Singapore and the Strand in Yangon. In the black and white marble tiled lobby the history of the hotel is retold in old photos, a social centre for Penang’s famous guests including Rudyard Kipling, William Somerset Maugham and Joseph Conrad. Sadly, after paying the passage of many bankrupt rubber planters back to Europe, after the Great Depression and decline in rubber, the family too became bankrupt. As the sun set over the Straits of Malacca I enjoyed reading Maugham’s short stories, several of which were set here, while sipping on a Pimms poolside.

In the mornings I would stroll along Jalan Sultan Ahmed Shah past faded mansions and hotels, waiting to be restored back to their former glory. In the Protestant cemetery, among gnarled frangipani trees, are the crumbling tombstones of British settlers who died of jungle fever, malaria and other maladies, including Francis Light’s tomb.
The transformation of Penang has been all the more remarkable since it retains an old-world feel by having sympathetically restored its architectural heritage. George Town is without parallel anywhere else in South East Asia, and it is emerging with renewed momentum as one of its most vibrant cities.

TRAVEL NOTEBOOK
Flights
Malaysia Airlines, Singapore Airlines and Air Asia offer flights to Penang.
Getting around
The best way to explore the historic centre is on foot, though a pleasant way to sightsee is by trishaw. The CAT Free Shuttle Bus makes 19 stops covering the main tourist sites and a hop-on hop-off bus also operates. You can hire a taxi or catch a public bus to explore the island, including the 101 to beach resorts at Batu Ferringhi.
Accommodation
The legendary Eastern and Oriental Hotel, one of Asia’s grand old hotels, offers opulent suites with glorious views overlooking the Straits of Malacca. Your stay here will be one of refined elegance, harking back to another era. www.e-o-hotel.com
The Straits Collection comprise four residences ideal for longer stays with colourful furnishings and antiques. www.straitscollection.com.my
Clove Hall, an Edwardian Anglo-Malay bungalow built in 1910 on the original Sarkie brother’s coconut plantation, has been transformed into an elegant boutique hotel www.clovehall.com
7Terraces in the centre of the historic district has a serene courtyard and an excellent restaurant, Kebaya onsite. www.7terraces.com
You’ll find flash-packer accommodation at Muntri Mews www.muntrimews.com or Stewart Houze email: 33stewarthouze@gmail.com
Ren i Tang is a sympathetic restoration of a heritage building www.renitang.com
Dining
The choices are endless and many swear it’s the best cuisine in Asia, a feast of Malay, Indian, Peranakan and Chinese. Recommended are the roadside hawker stalls. For Chinese head for Tek Sen Restaurant,  Sri Ananda Bahwan and Veloo Villas for south Indian food and China House for great dining, and an extraordinary selection of cakes and ice-cream. There are numerous fun and funky cafes too including Tea Home with a vast selection of teas.
More Information
Penang’s bookshops offer a great selection of books on local cuisine and history including Gerak Budaya Bookshop. Visit the Penang Heritage Trust for maps www.pht.org.my or for general information, go to www.tourismpenang.gov.my
- Advertisement -
Share
WhatsApp
Facebook
Twitter
Linkedin
Previous articleThe spirit of the game
Next articleTalking about India