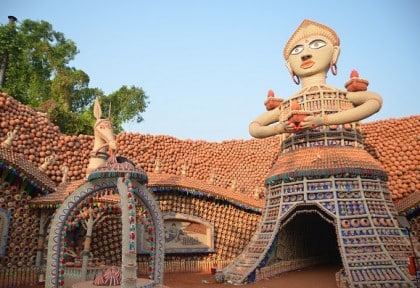 “Shortly our aircraft will be landing at the Netaji Subhas International Airport in Kolkata,” announces the flight attendant towards the end of the four-hour, pleasant journey from Hong Kong. I look outside through the window and the “City of Joy” twinkles beneath. As the aircraft descends further, the sparkle from the illuminating lights becomes richer. I am thrilled, knowing this radiant spectacle, crowning the city, is for the Durga Puja festival, which I am returning to after a gap of almost three decades.

During Navratri, this four-day annual festival, which revolves around worshipping the ten-armed Goddess Durga, is held in September or October, according to dates allocated by the Hindu calendar. As per religious belief, every autumn Mother Durga, with her children Karthikeya and Ganesha, returns to her parent’s home in the mortal land from her abode in the Himalayas. This perception of “homecoming” significantly escalates the joyous spirit of the festival as thousands return home during this period to share the season with friends and family; the flight filled with Kolkatans from different parts of the world standing testament to this notion.

The history of Durga Puja

As per Hindu mythology, worshipping of Durga, a symbol of divinity crushing evil forces, dates back millennia, with references in the epic Ramayana. Durga worship was generally held at temples throughout India, but more abundantly in Bengal. In the 18th century, when Kolkata was the capital of the British Empire, the city’s wealthy Indian kings, landlords, and merchants began organising this religious ritual at their residences. Soon it became a status symbol among the bourgeois featuring an added cultural extravaganza, including theatrical performances and musical soirees, combined with the religious orders.
The event began acquiring the shape of a festival, however the commoners had limited opportunity to participate. As a result, in the early 20th century some interested community members initiated a celebration to be held within their local area, at an outside venue, open to all, irrespective of cast and creed. What was earlier an exclusive family affair began its transformation into a community event by the name of Durga Puja festival.
As community interest and participation increased, almost every region in Kolkata, and throughout West Bengal, started organising these pujas at an open space, like a field or urban parkland. If none were available in the area, then there was no hesitation to use street corners or laneways, restricting passage of vehicular traffic.

Using bamboo frames, tarpaulins and multi-coloured textiles, temporary temples called pandals were built on-site to house the deities and perform the religious rituals. Funding for the event was sourced by drawing donations from the locals in the area. Over time, Durga Puja became an event for pageantry and entertainment.
Three decades ago, when I last participated in the event, the scenario was similar, except for the scale which has obviously become bigger and bigger.
However, what I experienced this time was something entirely different. It could be best described as a mammoth integration of creativity, talent, extravaganza and commercialism built within a ritualistic framework established over a century ago.

Kolkata, a metropolis of more than 12 million people, for four days takes the shape of an open-plan, outdoor art gallery, camouflaging its concrete-jungle image with a canopy of makeshift artistic displays and touches of magical lighting after sundown.

The décor for most of the big pujas is now based on various innovative themes which blend antiquity with modernity; they range from exhibiting rural Bengal craftsmanship and Rajasthan folklore, to Buddhist temples, British royalty, African jungles and even Brazilian football. Creativity has no limits when it comes to themes for Kolkata’s Durga Puja. Every year there is something new and innovative to look for. Some organisers are brave enough to adopt themes around burning social issues such as religious harmony, empowering women and climate change.
There is much novelty in the making of the pandals as well. Some are built out of unbelievable materials such as soft drink bottle caps, old gramophone records, broken crockery, old jewellery boxes, earthen pitchers and even sugarcane pulp! Some take the shape of an iconic structure such the Tower Bridge in London, the Lotus Temple in Delhi or the Parliament House in Budapest. So intricate is the quality of the craftsmanship that they all look like the original versions.
The artwork inside each pandal is equally admirable. With plush chandeliers hanging from the ceilings, it’s nothing unusual to imagine being inside a palace or grand temple. The design and styles of the deity also reflect the variety of talent. Some craftsmen maintain the traditional image, while many have revolutionised the concept, adopting ideas of a female motherly goddess from other Hindu temples in India and Nepal.

Lighting experts decorate the city into an unbelievable parade of lights throughout the night. There are several awards offered by large corporations to recognise the talents of artisans and organisers, and to inspire all to do better the following year.

The City of Joy

Throughout the four days of the festival, the City of Joy truly comes alive with happiness. Other than the emergency services, everything else, from schools and colleges to offices and banks, is closed. People exchange gifts, wear new clothes and feast on delicious foods. There is a friendly and relaxed mood in the air.

A carnival-type atmosphere engulfs the entire city, with fairs in every area hosting merry-go-rounds, giant wheels, magic shows, shops selling toys and handicrafts, and hordes of food stalls offering Kolkata delicacies like biryani, kababs, kathi roll, puchka, and luchi with aloor dum. Throughout the day and night there are always over a million people out in the streets, hopping from one pandal to the other and enjoying the assault on the senses.
While the aroma of food makes your mouth water, sounds of the beating of the special drums called Dhak mingle with songs and music gushing from loudspeakers to keep your ear drums pulsating ceaselessly.
The Kolkata Police Force does a great job in maintaining peace and harmony with almost zero crime during the four days of the festival which ends by immersing the deities in the River Hooghly.

As I hop from one pandal to another, I discover with a little sadness that the social engagement these local pujas earlier presented has now been replaced by commercialism. Funding for most pujas is today derived from corporate houses through sponsorship, which then leads to making the event a successful commercial venture rather than a social endeavour. However, the scale, majesty, and the utter extravaganza of the event without doubt makes it one of the biggest festivals on earth.
“We haven’t seen anything like this before,” says a group of well-travelled foreign journalists who came to Kolkata not knowing what to expect, but all are left mesmerised by the high standard and extraordinary splendour of the festival.

Getting There: Fly Air India (www.airindia.com) direct from Sydney and Melbourne to Delhi, then a connecting flight to Kolkata
Getting Around: Getting around by foot is the best option. Travelling by car is not impossible but is very slow and you have to follow several diversions to get from one point to the other. Getting inside a pandal requires patience and tenacity; the queue can be more than a kilometre long if that particular puja is award winning or well known.

Accommodation: There are hotels, hostels and guest houses to suit every budget and taste. The newly revamped, 195-room, Lalit Great Eastern (www.thelalit.com), Asia’s first luxury hotel, offers a central location for access to various Pujas in different parts of the city. Another option is to stay in one of the city’s many guest houses, one highly recommended is 30C (Airbnb listed, Call +91 9833 356 573), a well-serviced apartment, conveniently located in South Kolkata.