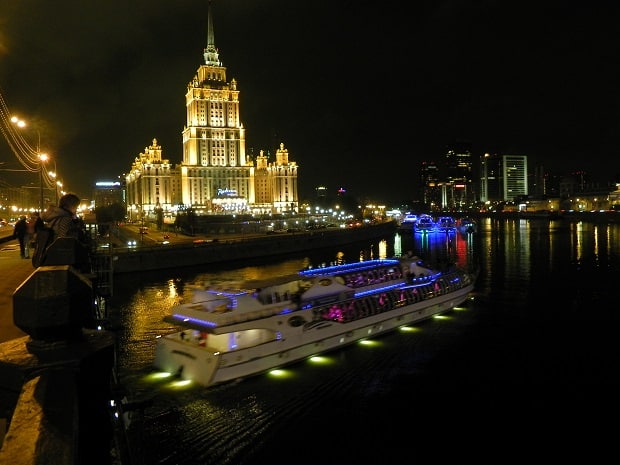 Reading Time: 5 minutesThe mystery and oppressiveness of the Soviet rule has disintegrated to reveal a friendly and modern city

As I was about to enter the historic Red Square in Moscow with hundreds of others, I saw Stalin – not exactly, but an impersonator who appears to me almost like the Soviet dictator as seen in photographs. Dressed in a military uniform embellished with red straps, the man with a perfect moustache, back-brushed hair and carrying a smoking pipe, waves at the crowd. While I captured him on camera, a few young Russians standing around giggle but an elderly lady came forward and asked me in poor English, why am I taking pictures of a killer?

This small incident immediately made me aware of two messages – that today’s generation doesn’t care about the past, but the older ones can’t forget Stalin’s atrocious rule from 1924 till his death in 1953, when over a million people were executed and 15 million more were sent to remote camps where death came from hard labour and starvation. However what struck me as most amazing is the people’s freedom of speech, which was very restricted in the past. Locals were happy and keen to talk about anything from the revolution and politics, to literature and food, though language is still a big barrier. However, in almost every conversation, a fondness for India came through as they referred to names such Nehru, Raj Kapoor and Mithun Chakravarti!

The Red Land has profoundly changed since the dissolution of the former Soviet Union in 1991, and its effects can be explicitly seen in the capital Moscow, which appears no different in character and lifestyle to any other Western-influenced metropolis. With the traditional red flag replaced by a blue, red and white one, the emerging wealthy elite called ‘New Russians’ have vastly improved the standard of Moscow living, making it one of the most expensive cities in the world. Our omniscient tour manager Anna from Insight Vacations informs us that after Perestroika, car ownership quadruplicated in the city and today the streets are clogged with vehicles, many of which are the top brands of the industry like Mercedes, BMW and Lexus. The city is now peppered with flashy restaurants, cafés, discos and nightclubs where vodka flows like water, and glittering shops that sell nothing but high fashion from famous designers.

The city was heavily dented by severe bombing during World War II; however in 1997, much of Moscow was renovated back to its original past grandeur, as a part of its 950th anniversary program. This included rebuilding of several churches which were destroyed during the Soviet era. Religion, which was practiced underground during the Soviet era, has regained its prominence with churches again being used for weddings, baptisms and other religious ceremonies.

From her 12th century origins as a murky defensive outpost, Moscow at it zenith governed almost one sixth of the planet’s surface and presents a story of rising and falling, laced with glory and setbacks. Having endured imperialism, wars, revolutions, communism and drastic social changes, the metropolis today is a unique blend of the past and present that captivates and charms. Visitors are often surprised by the wealth and variety of its architectural marvels – forts, palaces, cathedrals, monuments – spread throughout the city, and the  magnitude of art housed in its several museums.

I read in a guidebook that there are over 100 places of interest in Moscow. But while exploring the city, there are countless and it is impossible to savour, even the main ones, in a single visit. So I ventured to view the icons which are regarded as almost mandatory – Red Square and the Kremlin rank at the top.

Derived from the Russian word ‘Krasnvy’ meaning ‘red and beautiful’, the 500m long paved square started as a marketplace and became a familiar location since the Soviet era, when it was used as the venue for government addresses and military parades. Adding flavour to its name, red-coloured buildings like the Historical Museum and the Resurrection Gates flank the square. However, the highlights of this domain are the 16th century built St Basil Cathedral with its twisted onion domes, Lenin’s Mausoleum where the former leader’s body is preserved and the GUM departmental store that is celebrated as one of the world’s largest shopping arenas. Also unique is the Kremlin which has remained a symbol of power of the State since it was built in the 12th century as a wooden fortress (‘kreml’ in Russian meaning ‘fortress’), at the confluence of two rivers Moskva and Neglinnya.

The Kremlin is also the confluence of several periods of Russian history. It began its humble journey when built to keep the Mongul invaders away; next, it became the citadel of the Tsars; even later, it was the headquarters of powerful Soviet Union; and it now exists as the administrative seat of the Russian Federation and the residence of President Vladimir Putin. Relics from the past are visible at every corner. The expansive complex, with just half open to public viewing, houses several palaces and cathedrals, an ensemble that depicts stately grandness.

I visited the famous Cathedral of Annunciation and Cathedral of Assumption, two of the most important churches in Russia, wandered inside the Great Kremlin Palace, browsed through the royal artifacts in the State Armoury Museum, and watched an evening ballet performance at the State Kremlin Palace, a nice alternative venue to the prestigious Bolshevik Theatre where tickets are extraordinarily expensive and have to be booked months in advance. Following a path along the red brick walls that surround the Kremlin, I witnessed the Change of Guards ceremony at noon, and walked past graves of many Soviets including the ruthless Stalin and astronaut Yuri Gagarin, the first man to orbit space.

Taxis are highly priced in Moscow, but transportation by the metro railway is cheap and very rewarding for art lovers as the concourse and platforms of some underground stations resemble miniature museums, with mosaic artwork on walls and ceilings, sculptures ornamenting spaces, and grand chandeliers illuminating the works on display.

As the former Soviet Union was always circled by a sense of mystery, I entered Moscow with an eerie feeling which soon vanished as I was engulfed in a friendly environment, offering me the space and time to enjoy this historic city in safety and comfort. My trip to the Red Land ended on a happy note.

Getting there – Singapore Airlines (www.singaporeair.com) flies daily from Australia to Moscow, with an aircraft change in Singapore.