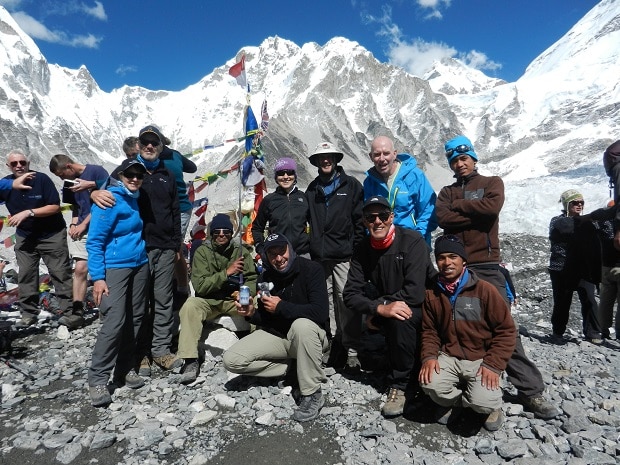 Reading Time: 5 minutesIt is a harrowing but ultimately rewarding trek to Everest Base Camp

Whenever I see snow covered mountains it takes my breath away. After my trek to the Annapurna Dhaulagiri mountains in 2012 I knew I simply had to see the mountains in the Everest region – really close up. For this reason, in October 2013, at the age of 67, I signed up for the trek to Everest Base Camp (EBC) which is situated at a height of 5364m.

It was a daunting prospect, one that my family were not too happy with. It was going to be tough. I knew I had to step up my training routine. I could leave nothing to chance.

Our trek was to start at Lukla 2880m which is a 25min flight from Kathmandu. As it happens, Lukla airport is reputed to be the most dangerous airport in the world. The runway is very short and narrow and is remarkable being at an incline of 12 degrees with a large cliff-face at the end. Tiny planes fly in between mountain ranges just clearing the tree-tops. They bank left and land with a huge thud and immediately start the climb up the runway with the engines making a deafening screech and come to a stop just as the cliff-face is approaching.

After watching a few mind-blowing landings and take-offs at Lukla airport it was on with our wet weather gear as clouds were starting to close in. Our group of eight was led by a trek leader and included two guides who would walk with us and four porters who carried our kitbags containing all we needed for the entire trek. Directly from the airport we started our much-awaited trek bound for Phakding at 2610m, a better level for our bodies to get acclimatised to the altitude through the night.

Because of the bad weather at Lukla our departure from Kathmandu was delayed by a day. To make up for lost time, our walk from Phakding would be long and hard all the way to Namche Bazaar 3440m. This was not good news as we would be ascending 830m in one day. As is well-known, the risk to Acute Mountain Sickness (AMS) increases when a day’s climb exceeds 300m. The intermittent drizzle that had set in was going to make for a harder walk. Just as disappointing was the fact that all the low clouds had meant that we had no views of mountains. After a huge final climb we arrived at Namche Bazaar to find it spread out in a tight cluster of houses. It’s a delightful little town, boasting bakeries, a couple of pubs, many souvenir shops and lodges for trekkers. I bought a couple of post-cards and went along to what I thought would be the highest post-office in the world. To my surprise I learnt that the world’s highest post office at 4724m is in the Lahul Spiti district of Himachal Pradesh. Apart from being utterly exhausted I was pleased with myself as I was feeling quite well with no symptoms of AMS.

The next day was to be the first of two acclimatisation days. I had been looking forward to this that we would have a rest day in Namche. Not so. The idea of the acclimatisation day is to climb 400/500m up close to the altitude of the next destination, rest for a while and then come back down to the start.

The climb to Thyangboche (3860m) was a challenging one, with a final climb of 600m. This brought us to a delightful meadow which has a large Buddhist monastery. So far cloudy weather had denied us the views we should have had of many of the largest peaks. On waking the next morning we saw blue skies and found we were surrounded by wonderful panoramic views of some of the highest mountains in the world, including Lhotse, Nuptse, Ama Dablam and Mt Everest. I like to think it was the blessings of the solitary monk at prayer when I visited the monastery that gave us clear blue skies for most of the remaining days of our trek.

No longer were the tracks, which usually comprise rocks, stones, boulders or sections where we had to clamber up or down slipping and sliding, going to dampen our spirits. We saw many trains of yaks, mules and dzokyos (cross between a yak and cow). But it was the porters, bent double carrying heavy loads, that one really felt for.

Our route included many suspension bridges which were also used by the animals. These high bridges swayed and the noise from the raging streams below was deafening, so just to concentrate and walk with balance takes a fair amount of energy.

The trees were soon going to disappear, but we had walked through forests of rhododendron, pine, silver and red birch surrounded by snow-covered silver peaks set against the blue skies. As we went higher, the trees gave way to bushes and past Dingboche (4410m) we were in a barren, bleak landscape of stones, rocks and mountains. The ground around us was rugged and unforgiving as was the air which had now got quite thin and the cold was intense.

We were at the business end of the trek. Sunny, perfect weather meant mountains of pink and orange in the setting sun.

Next morning we watched the sun rise from behind the peak of Ama Dablam. So close were we to the peaks that we could see powdery snow being blown off the mountain tops.

We saw a Medi-Vac chopper land close to us and pick someone up. It must have been devastating to be so near EBC and to have to be evacuated most likely with AMS.

The thinner air made the sky go a very deep blue, making a dazzling contrast with the silver-white of the snow on the peaks. Before we arrived at Lobuje (4910m), we came to a ridge where memorial cairns of climbers and Sherpas who have lost their lives while climbing the mountains all around us have been placed. It was a sobering thought indeed and all trekkers spent a little time in reflection.

The peaks of Pumo Ri, Lingtren and Khumbutse became visible. As we walked in silence with the Khumbu Glacier on our right, we could hear several avalanches and saw one as it happened. It was an awesome sight. A little later we heard the deep-throated crackle and grinding sound of the glacier. The glacier had many interesting formations in ice and was covered with stones, rocks and boulders. It looked dirty and sad, like a massive sleeping giant. It was a stark contrast to the pristine peaks, all covered in snow and ice, looking majestic as they rose up into the deep blue sky.

Then there was Mt Everest, the king of mountains, in all its glory, with the Khumbu Glacier at its feet and blue skies above.

Our final day to EBC involved close to 9 hours of strenuous walking. We did it! There was laughter, happiness, back-slapping, group photos and a feeling of dreams come true. Magical moments are few in life but this was surely one of them.

I was reminded of one of the eight symbols of Buddhism, the Eternal Knot. It’s a representation of inter-twined lines that have no beginning and no end. There is a completeness, an inter-dependence, with everything in balance and in perfect harmony that cannot be bettered. Perhaps this is what I had witnessed in the beauty of these mountains.