Journey into the interior 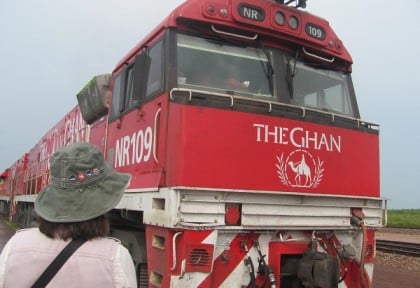 On one of the world’s legendary train journeys, The Ghan, Australia’s interior inspires awe for its vastness and ever changing landscape

Though underfoot the ground was parched and cracked, as we walked along the bush track signs warned us against swimming. Our guide Andrew shrugged his shoulders and confirmed that the waterhole had been dried out for years. He then sat down before us, carefully unzipping a thin long bag from which emerged a didgeridoo that he began to play, the rhythmic sounds reverberating off the tall jagged cliffs. We had arrived at Simpson’s Gap in the centre of Australia on a hot summer’s day.


By now I’d travelled halfway across Australia’s vast interior, having boarded the Ghan to join an epic rail journey that would take 56 hours and span 2979 kilometres from Darwin to Adelaide, the world’s only transcontinental line that dissects a continent from north to south. The Ghan is also one of the world’s mightiest trains, measuring up to 1.2 kilometres in length, though on this journey it was almost half that at 710 metres hauling 30 carriages.

Pulling out of Darwin’s Palmerston station, the Ghan gradually picked up speed settling into a comfortable rhythm as we passed by a lush green tropical landscape punctuated by termite mounds. A delicious lunch soon followed featuring quality Australian produce. Served on heavy china with starched white tablecloths, choices included duck, kangaroo steak or vegetable tart followed by a passionfruit slice, panna cotta or ice-cream paired with premium Australian wine or beer.
On arrival in Katherine, a town of scarlet Poinciana trees, passengers could join one of several excursions including visiting an outback sheep station, viewing Aboriginal rock art or, at an additional charge, flying overhead by helicopter. I joined a leisurely river cruise to view the ancient rock gorges at Nitmiluk National Park.

At dusk after we reboarded the train. Time on-board was spent reading, relaxing and becoming acquainted with our neighbours. By now most of us left our doors ajar, mingling in the corridors or socialising in the lounge, which became the social hub of the train. There were 200 passengers on this trip and it was time to meet them over a drink in the lounge with beer, wine and even swish cocktails included in the fare.
I’d chosen a Gold Service single with a carriage of 16 cabins just for solo travellers. Framed by a large picture window and fitted with a seat that converts to a bed, the compact single cabins have a vanity with a rack for toiletries, wardrobe and storage space underneath. Toilets and showers are at either end of the carriage. Gold Service twin cabins feature an en-suite bathroom and a seat that converts into a bed with a second bed folding down from above. Newly refurbished, the cabins feature wood panelling and contemporary muted tones. The luxurious Platinum cabins are even more generously proportioned with a private restaurant and lounge car.
Next morning we woke to the parched outback scenery sliding by at its best in the early morning light, with shades of orange, red and gold. Emus and grey kangaroos were visible as well as many species of birds, including corellas, white cockatoos and eagles circling high overhead.
With one of the most dramatic settings of any inland Australian town, as we neared Alice Springs the red and crimson mountains of the West MacDonnell Ranges came into view rising 900 metres upwards, towering above the surrounding plain.


Until 2004 there was no rail line connecting Alice Springs to Darwin and when it opened it did so amid considerable fanfare. The rail line between Adelaide and Alice Springs opened decades earlier in 1929. Then hauled by a steam locomotive, the journey took several days on a narrow gauge that went via Oodnadatta. Legend has it, that whenever there was a breakdown and food provisions were exhausted, passengers lived off whatever game the engine driver was able to shoot. Earlier, in the 1800s, railway Afghan cameleers covered vast distances supplying outback communities with essential supplies. It is in recognition of the crucial role played by the cameleers in opening up Australia’s interior the rail service was named the Ghan.

Off train excursions include the Alice Springs Desert Park, a town tour with stops including the Royal Flying Doctor Service and overland telegraph station, or the excursion that I chose to hike to Simpsons Gap.

The trail led us to a look-out from where we were able to view the flat expanse below of red earth interspersed with clumps of gnarly saltbush and grassy stubble, acacias and majestic ghost gums.
After reboarding the train, we passed the Finke River, a broad expanse of dry sand with wild brumbies and cattle, before passing the ironman sculpture built to commemorate the laying by construction workers of the one millionth concrete sleeper.
Just before midnight our final treat of the journey was at Manguri near Coober Pedy, an Aboriginal name meaning ‘white man’s hole’ where most of the world’s opals lie concealed beneath a lunar landscape inhabited by miners who live underground. Here we enjoyed handmade chocolates and liquors while a crackling bonfire was ablaze under a sky brilliantly glowing with stars. After retiring I lay snugly gazing out of the window for hours rocked by the train’s gentle rhythmic sway. Australia’s interior is vast and empty.

Next morning the landscape was dotted with merino sheep and cattle as we passed the Flinders Ranges with red river gums, historic ruins, station homesteads with broad brimmed verandahs and shearers quarters. Evocative names come from the towns and settlements through which the Ghan travels including Muchaty, Tent Hill, Illoquara, Coondambo, Pimba, Bookaloo, Rocky River and Dry Creek with town after town of charming heritage cottages, stone churches and the vibrant yellow of canola crops and wheat farms; it is truly one of the most scenic parts of Australia.
As we headed towards the temperate southern coastline, the red desert and salt lakes that were once thought to be a vast inland sea gave way to a fertile landscape of green rolling hills, vineyards, fruit orchards and olive trees with flocks of brilliant green and red lorikeets, ibis and screeching pink and grey galahs.

After a leisurely brunch, the Ghan pulled into Adelaide with its imposing 19th-century sandstone architecture, parklands, broad streets and public squares. We had finally reached journey’s end.
Australia’s interior inspires awe for its vastness and for its ever changing landscape, from the fertile hills in the south to the outback in the centre and the lush tropical north that can only be understood by travelling across it. A voyage on the Ghan will take you on one of Australia’s most remarkable journeys.

Qantas, Jetstar and Virgin fly to Darwin and Adelaide. Darwin City Airport Shuttle will deliver you to your hotel.

You can ride the Ghan for 3 days or the new 4-day expedition to allow for longer at each stop. For Gold and Platinum Service, a coach transfer to the train from selected hotels, meals, refreshments (premium wine, cocktails, liquors and beer) and off train excursions are included with no single supplement for solo travellers. Phone: 1800 726 915 W: www.greatsouthernrail.com.au

A vibrant, energetic city, Darwin offers great dining, parklands, beaches and brilliant sunsets. If you are joining the Ghan with little time to spare the Mercure Darwin Airport Resort is close by the airport. W: www.accorhotels.com

With a great location in the centre of Darwin the Mantra offers rooms and apartments that overlook the Esplanade and Darwin Harbour. W: www.mantra.com.au

Adelaide is deserving of several nights to explore the winegrowing areas of the Barossa and McLaren Vale, Adelaide Markets, Botanic Gardens, beaches and more. For accommodation try Peppers, Mantra or Breakfree www.mantra.com.au

Pack a jumper or pashmina shawl as the air-con on the Ghan can get chilly. Generous luggage allowances apply.